The Heart Marries Us

Hoping to be more engaging and informative to those visiting Twin Rocks Trading Post in the future, I have determined to gather additional information about our local Indigenous cultures. Specifically, I hope to better understand and relate to the Navajo people, their culture, and this red-rock land we share.

Kira and Grange have been on their own for some time now, and Jana generally leaves the house early and returns late from her job teaching art at Whitehorse High School in Montezuma Creek. So, especially during the long winter months when things are slow in Bluff, I am often left to my own devices. That, as those of us at Twin Rocks Trading Post and Cafe have learned, is a problem. As Donna Summer said in her 1978 hit song Last Dance, “[W]hen I’m bad, I’m so, so bad.” To bring the matter closer to home, as Jana likes to say, “Nature abhors a vacuum.” Consequently, those empty hours must be filled, and, at least for now, books about Four Corners art, culture, and history are keeping me from long-term incarceration. 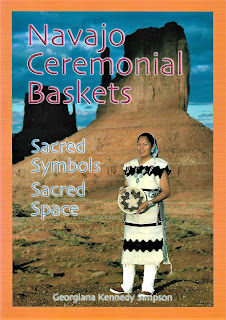 In order to improve domestic relations at the old L.H. Redd Jr. house and get crackin' on my goal, I have elected to start with Navajo Ceremonial Baskets: Sacred Symbols, Sacred Space, Jana’s 2003 publication on Navajo basketry. In the intervening years since Jana published her research, Twin Rocks Trading Post has become widely known for carrying work by the Monument Valley basket makers, including the Black family, the Bitsinni crew, and the Rock-Johnson clan. In fact, the post is the epicenter of the contemporary Navajo basket-weaving movement. My knowledge of Navajo ceremony and the usage of baskets in these rites, however, can use some work. As a result, I am studiously plowing through Jana's findings.

The book is chock full of interesting material about the evolution, construction, meaning, and people behind these weavings, which has greatly added to my fluency on the topic. I found one of the most useful nuggets in a chapter discussing the power vested in these sacred objects. In that particular section, Jana quotes widely-respected, and now deceased, medicine man John Holiday. During his interview, John informed Jana that, “Like us, the basket has two spirits. We are both male and female, and our heart marries us.” John’s words relate to the Navajo view that we are all composed of both male and female ingredients: the right side being the male or warrior component and the left being female and compassionate. These disparate parts are joined by the kindness, empathy, and understanding thumping in our chests. 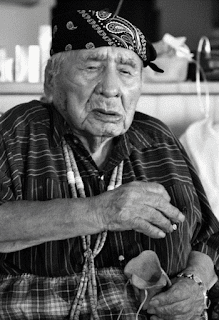 As John Holiday pointed out, traditional Navajo people believe there is duality in all things. It is not just the male/female dichotomy that rings true; what really captivates me is the teaching that all of us are inherently good and bad, positive and negative, right and wrong, cold and hot, darkness and light, and that this multifaceted composition is essential to our existence and growth as individuals. It is that experience which makes us whole, and also gets me off the hook when I go wrong.

When we recently discussed this Navajo custom, Priscilla related the story of the shoe game, a competition that is responsible for our days being half day and half night, half dark and half light. According to her, the story goes something like this: Long ago the Day Animals and the Night Animals played a moccasin game that lasted four days. The Night Animals and Night Birds had Owl as their leader. The Day Animals and Day Birds had Coyote as their captain. Both sides independently determined the game must result in a tie, because if one side won, it would be either all night or all day for everyone ever after, and no one wanted that result. So, a small stone was hidden in one of the four moccasins used in the game. Nighthawk took first guess, and won. Then Big Squirrel won. Then Small Owl. Then Martin. Then Bat. Then Gray Squirrel. Then Prairie Dog. Then, the stone got lost. Gopher and Locust looked underground for it, but they could not find the stone. Then Red Bird struck Owl’s hand and the rock, which Owl had been hiding, dropped out. At that point the game ended in a tie. And that is why we have equal allocations of day and night.

During his recent visit home from the University of Utah where he studies biomedical engineering, Grange’s high school friend Nizhoni invited him to a shoe game that was held on the reservation. As he scooted out the door, I noticed him carrying a Ziplock bag full of shiny new quarters. Upon checking my piggy bank, I noticed it had been relieved of its newly minted coinage. Grange had apparently determined he needed a stake to get involved in the ceremony and the porker got pillaged. During his tenure at Bluff Elementary School, Grange learned the rules of the game during Native Culture class. Consequently, he must have concluded he would return with even more cash and could replace the “borrowed” coins before I noticed they had gone missing.

When I discussed this with Priscilla, she said, “Well, that just proves John Holiday was right. There you have the Navajo and the Anglo; the old tradition and the new coins; the day and the night ceremony; the boy and the girl; the win and the lose. And, they are all together in your heart.” Leave it to Priscilla to sort that one out.

Posted by Tied to the Post-Twin Rocks Trading Post at 12:31 PM