The Faux Tree of Love and Life

Over 20 years ago I found myself knee deep in cold, wet snow on a southern slope of the Blue Mountain searching for, "The perfect Christmas tree." My wife was pining for a tree of the ideal height, symmetry and balance to fit into our living room in a spectacular fashion. Laurie was home with our three very young children and I was taking time off from my labors at Twin Rocks Trading Post to satisfy her wish. I left for work and struck-off in the old Dodge pick-up truck we had at the time. After tossing an ax and a bow saw in the back, I drove up the mountain road. I believed that I could find our tree and be off the flanks of the Blues in record time, but that wasn't working out so well. It seems that perfect trees are extremely difficult to find. I was, however, determined. Laurie had given me three incredible children and I was determined to provide her with a magnificent tree.

That entire day I trudged through snow drifts and flurries. I can't tell you how many times I spotted a likely target, floundered over and discerned the topiary to be lacking in one way or another. It was either too tall, too short, too wide, too thick, too thin or missing branches, causing a gap tooth effect. I was getting frustrated because nothing yet was worth taking home to my bride. Laurie loves the holidays. In fact, she is a festival on hot wheels, a real and true advocate of gifting good tidings and great joy to me and our children. That woman had done more for me than I can ever emulate, and our life together was just beginning. For me, this was an opportunity to do something for her and if I lost feeling in my legs to do it, then so be it. Unfortunately this was not the day to accomplish the goal. As the sun began to set I admitted defeat and drove home to defrost my lower extremities.

Laurie was on to me by now and warned me away from facing fatigue and frostbite, but I would have none of it. That cursed mountain would not deprive my wife and children of a Christmas without perfumed perfection. But it did--for two days more I searched those provoking peaks. The Navajo people believe mountains are hallowed ground, deities dwell within them, they are blessed with plants and animals brought forth by sacred ceremony. Had I ticked- off someone or something of consequence through my dealings with The People and their cultural icons? I would need to check with Priscilla Sagg our sage supervisor in such matters. I did know for a fact that because of my now frequent excursions into these hills the Navajo monster called Cold Woman was beginning to get a grip on me.

Laurie must have decided enough was enough, because she suggested I take the next day off. My self imposed quest for perfection was beginning to get on her nerves. She asked me to go Christmas shopping with her in Cortez, Colorado. "Grandma Washburn will watch the children, it will be nice, come with me," she cooed. I have never been able to resist her charms, so I went along without resistance. While in town Laurie suggested we visit a nursery, she was interested in picking-up some poinsettias. As we arrived I noticed a large grouping of cut Christmas trees in a nearby lot. I told Laurie to go-on inside, I would wander over and compare my ideal image of the perfect tree against these inferior specimens. I walked onto the lot and was startled by the elegance of a stately Douglas fir. It was simply sublime. Voile! Twenty minutes and $100.00 later the tree was tied to the top of our car and my quest for excellence was complete.

Laurie, the poster girl for frugality, was not happy with my excessive expenditure, but I assured her this tree would make our Christmas great. And it did, to a certain extent. Laurie learned that I would do most anything for her and the kids, and I gained a better understanding of how marvelous close relationships can be and the joy children bring into our lives. From that point on though I have been banned from over spending on the holiday experience. The next year my sister Cindy and I were doing a trade show in Gatlinburg, Tennessee, marketing our Native American products to the Eastern Seaboard. One evening after the show closed Cindy and I were out and about in Pigeon Forge, a town a few miles down the road from Gatlinburg. We entered a Christmas store the size of a city block which was lit-up in colored lights, like the Rockefeller Center in NYC. In the central courtyard I saw the very same Douglas fir I had purchased in Cortez, Colorado. The difference was that this one was made of plastic and steel. It was beautiful, but lacked the enticing odor of the real deal. "No worries", said the salesman, "This little aerosol spray will satisfy your olfactories."

A few days older and a tad wiser, I called Laurie on the phone and asked her opinion. I told her this was the biggest and best faux tree for the money; it would last decades and the price . . . only $200.00. A bargain at twice the price. The convincing argument was that it would be a one time expenditure, and I would no longer need to tempt fate and frostbite to prove my affections. Permission was granted. Cindy and I both bought one and had them shipped to canyon country via UPS. That very same tree has been raised and lovingly decorated in our home for 20 years now. Laurie, the kids and I have shared many Christmas seasons under its enduring boughs and the soft warm glow of Christmas lights embracing its form. The kids are mostly grown. Spenser just completed a Masters program with the University of Kansas, Alyssa is wrapping-up her Bachelor Registered Nursing degree at BYU and McKale is serving an 18 month mission for her church in the California, Bakersfield mission. Everyone is well and happy.

That old Douglas fir look-alike is a bit haggard and worn, but Laurie refuses to discard it. She gets attached to things and has a hard time letting go, even when she should. Lucky for me! Laurie and I, and hopefully our children, look forward to many more Christmases with that tree and just maybe, if the future allows, a few grandchildren may experience the warmth and happiness that tree represents to us. All of us here at Twin Rocks Trading Post and Cafe wish you the best of the holiday season. Be well.

With warm regards Barry Simpson and the team;
Steve, Priscilla and Danny.
Posted by Tied to the Post-Twin Rocks Trading Post at 7:22 PM No comments:

It was a foggy Sunday morning in the land of turquoise skies and coral cliffs. Consequently, the heavens were imperceptible and a shifting blanket of mist hung over the red rock bluffs. The misty cover intermittently opened to reveal patches of moisture-streaked sandstone and then all to quickly reformed to obscure the red rock escarpment. Priscilla has informed us this is a time when the gods plant seeds that will sprout in the spring. According to her, it is a sacred time.

Having walked the five blocks from our house on Mulberry Avenue to the front doors of Twin Rocks Cafe, Grange arrived for his stint as head cashier. Shaking off the cold, he announced, “Hey dad, this is a beautiful day. I love the fog.” In a wintry, austere, crystalline way, it was indeed glorious.

Not long after the smell of frying bacon began to permeate the restaurant and the open sign was illuminated, a party of three seated themselves at a table next to the kitchen and Samantha took their breakfast order. As I meandered through the dining room, inspecting tables and making sure everything was in order from the night before, I overheard their conversation. The two women spoke with a heavy brogue, which clearly emanated from the Southern Hemisphere. 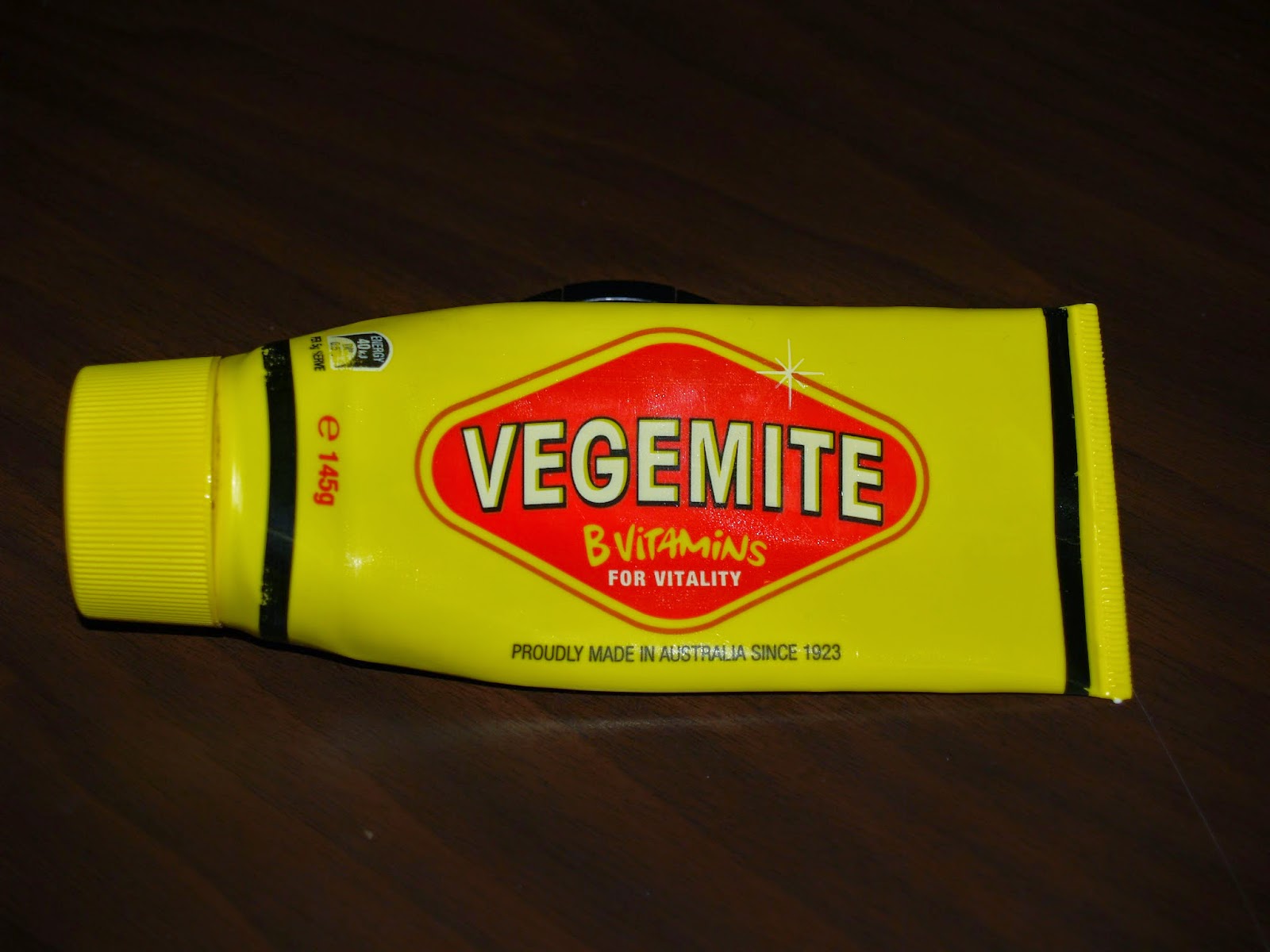 At Twin Rocks Trading Post and Cafe we make a game of guessing where in the world our customers originate. Over the years we have become adept at identifying countries of origin. Knowing they had to be from one of two places, I stopped by their booth and inquired, “Aussies or Kiwis?” One of the women reached into her coat pocket, and, smiling broadly, brought out an almost exhausted bright yellow tube that prominently displayed the Vegemite logo. Remembering the 1980s song by the Australian new wave rock band Men at Work, I said, “Do you come from a land down under?” To which the trio replied in unison, “Where women glow and men plunder.” At that point we all burst out laughing.

Grange, wondering why we were making so much racket, came to investigate. About that time the man, who was actually from Los Angele's but had previously dated an Australian woman, took the tube and smeared a healthy portion of the dark goo on a piece of fry bread. “He just smiled and gave you a Vegemite sandwich,” the second woman said chuckling at her own joke.

Having only heard of Vegemite, and being somewhat concerned about the bite marks on the scone, I was nervous. The man was, however, insistent and the ladies were obviously having great fun, so, asking if they “Were trying to tempt me”, I took the offering and gulped it down.

Seeing my nose scrunch and my lips pucker in response the bitter taste of the gloppy yeast extract Australians swear is essential for brain activity, fighting fatigue and enhancing all manner of human functions, the instigator sang, “You better run, you better take cover.”

Since Grange was too young to be familiar with the song’s lyrics, he just stood there with a baffled look on his face. Sensing another opening, the man pulled off another hunk of bread and made a smear for him. “He might ‘chunder’ I cautioned. There was, however, no alternative but to comply, so I encouraged Grange to “eat up”.

As they paid their bill and walked out into the fog, I could hear the Aussies singing, “We come from the land down under, where beer does flow and men chunder.” I was clear that in this introduction the gods had planted seeds; seeds goodwill, seeds of cultural exchange; and seeds of friendship that had already blossomed.

Trying to clear up Grange’s confusion, I went to the computer and pulled up the lyrics. As he read the words of the song, I said, “Maybe you’ll meet a strange lady who will take you in and make you breakfast.” Being just 15, he blushed red like the rocks.

With warm regards Steve Simpson and the team;
Barry, Priscilla and Danny.
Posted by Tied to the Post-Twin Rocks Trading Post at 1:06 PM No comments: