A Year in the Life of the Twin Rocks 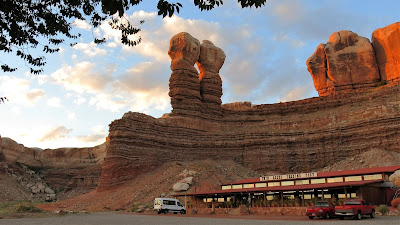 The Year in Review: 2019: It’s time again to present our annual feature, Rick Bell’s Year in Review, for your viewing pleasure. This year’s focus is on our namesake and logo, the Twin Rocks, which happen to be our closest neighbor. Living above the Trading Post, Susie and I watch the Rocks from early morning until late at night, and the great stone pillars seem to change with the weather, seasons, and lighting conditions. Here’s a collection from the last twelve months under the Twin Rocks. 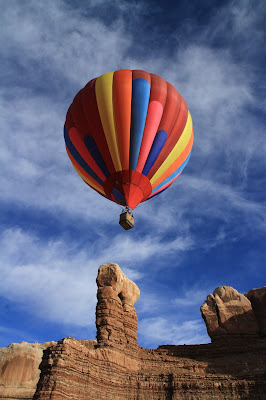 January
Bluff’s International Balloon Festival occurs every January, and it is just around the corner again. From January 17 through 19, 2020, we will see more than twenty balloon crews in town for the 22nd Annual Festival. Many of the balloons are inflated in the Twin Rocks Trading Post parking lot and drift over our trademark stone sentinels. 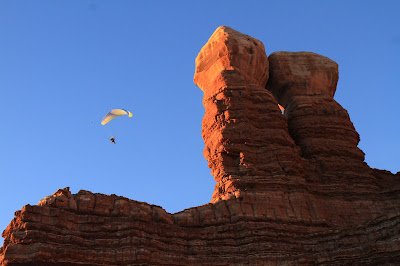 February
Anytime during the year, we see things fly around the Twin Rocks. They are usually the ravens that inhabit our world, but sometimes an annoying clone will buzz around for a while. A pilot in his powered parachute circled and circled last February in the clear winter air. 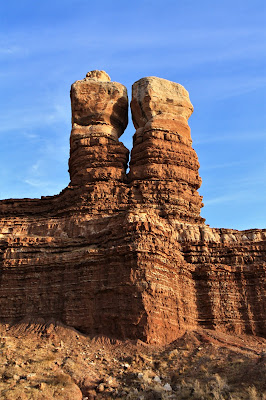 March
Most visitors to the trading post view the Twin Rocks’ east face from the parking lot and café. A short three-minute walk around the monuments reveal a lovely little box canyon and an entirely different view, the west side of the Twin Rocks. The narrow gap separating the great stone pillars, only about 18 inches apart at the bottom, is clearly visible. 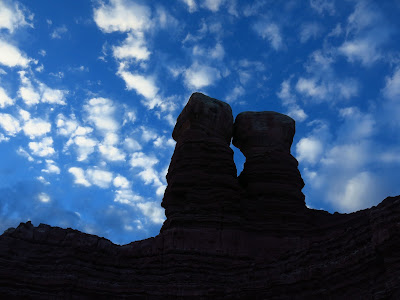 April
Popcorn clouds provide a lacy backdrop for the Twin Rocks. The time of day and season dictates the visual effect, dramatic whether in sunshine or shadow. April in Bluff brings wonderful weather and many more visitors to the area. There is perhaps no place in the Four Corners that inspires as many selfies as the Twin Rocks. 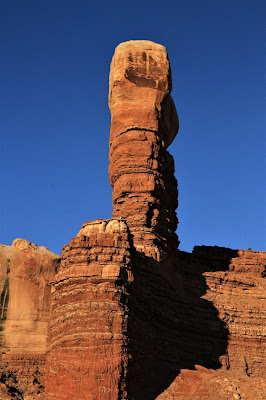 May
If you approach directly from the south, only one Twin is visible, giving the impression that is all there is. When you move a few yards east or west, the second Twin emerges out of hiding from behind the first. We typically see several cars a day stop on the south side and take photos of the seemingly solitary Twin. 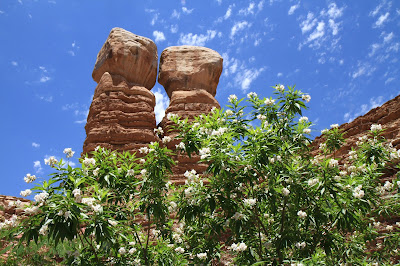 June
We have very few flowering plants in the area, but there is a nice little blossoming tree in the backyard come summer. It seems that nobody around here can identify the little tree, not even Priscilla. For a few months each year, we get to enjoy its bright white blossoms outside our bedroom window. 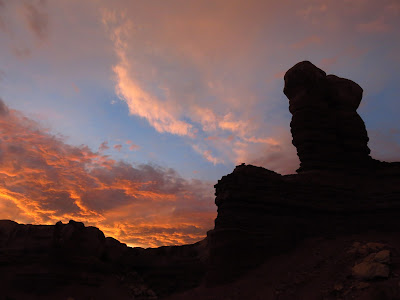 July
In Bluff when we have clouds in the late afternoon, we get some pretty glorious sunsets. Depending upon the atmospheric conditions, the colors can range from pale pink to spectacular swirls of dark purple and red. The best place to view sunsets is from the Bluff Cemetery, located high above town, but a close second is right behind the Twin Rocks Trading Post and Café. 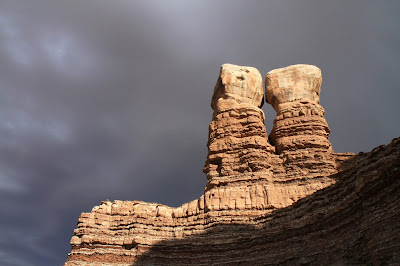 August
In most years, August brings the annual monsoons coming up from the southwest. Dramatic dark-cloud banks rise from the west and provide an unusual backdrop for the Twins. To the Navajo people, the Twin Rocks represent the feathered prayer sticks, called k’eet’a’an, placed there by the Holy People to bless the Hero Twins, “Monster Slayer” and “Child Born for Water.” 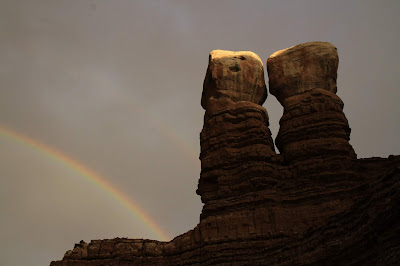 September
An unusual early morning rainbow arrived just as dawn began to illuminate the tips of the Twin Rocks. Bluff averages only about 6 inches of moisture a year with most of it arriving during the monsoon season. In 2019, only .02 inches of rain fell during the “rainy season,” but fortunately the skies have opened up lately, and we have exceeded our normal annual rainfall. 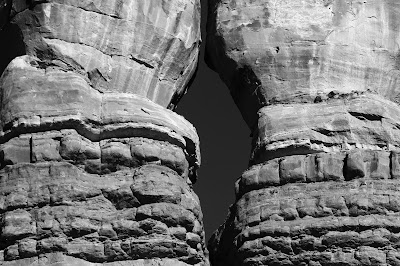 October
The Twin Rocks were formed by layers of compacted Summerville Formation shale, capped by a harder layer of Bluff Sandstone, forming stratified tiers of stone. This entire area was a vast inland sea during the Late Jurassic period, more than 150 million years ago. As the waters receded, great layers of sand were deposited and solidified. Later, hard-limestone caps formed and prevented the layers beneath it from eroding as millenniums of wind sculpted the monuments. 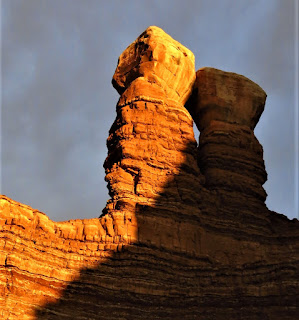 November
When November arrives, the days grow shorter and the direction of the sun moves decidedly to the south. For a brief few minutes each morning, only one of the great monuments catches the rising sun, creating the unusual view of one Twin in brilliant sunshine and the other in deep shadow. 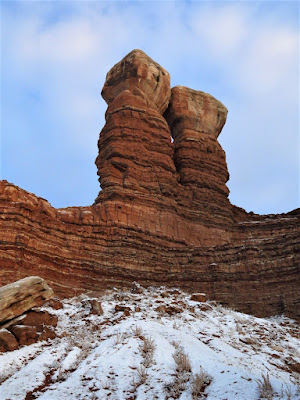 December
Heavy snowfalls are relatively rare here, but Christmas night saw a light dusting. Every season is different, and the low winter sun paints its own subdued portrait of the Navajo Holy Twins in our side yard. Either in the brightest direct sunlight, or the soft silvery light of evening, the Twin Rocks are constant companions and silent next-door neighbors.

It would be remiss not to report a conversation that is repeated daily here at the Trading Post during tourist season. Several times a day, some variation of this conversation takes place:

Rick: “Worried about what?”

Visitor: “Worried about those rocks falling down.”

Rick: “No. I figure if they fall, there’s a 50-50 chance they fall in the opposite direction.”

Susie: “And if they do fall this way, we won’t even know it. They can just place a nice bronze plaque on the rubble which says, ‘Here Lies . . . ’”

Posted by Tied to the Post-Twin Rocks Trading Post at 1:08 PM No comments: 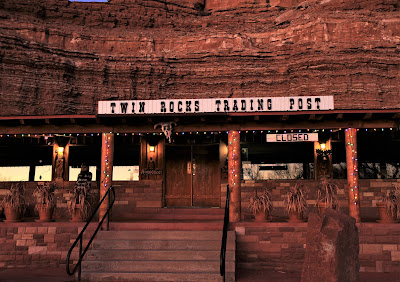 As 2019 quickly fades, we at Twin Rocks Trading Post are grateful for your support and encouragement over the past year. This is the one week of the year when we close the Trading Post and Café to provide some downtime for all our staff.

While 2019 presented many new and unexpected challenges, Rick, Susie, Priscilla, and Steve feel confident we are poised for an exciting and successful 2020. Please join us in waving goodbye to this year and welcoming in the next. We look forward to continuing and strengthening relationships with our countless artists, customers, and suppliers.

Happy Holidays from the Twin Rocks Team!
Posted by Tied to the Post-Twin Rocks Trading Post at 11:06 AM No comments:

Druids in Our Midst: Winter Solstice in Bluff

Throughout the ages, cultures around the world have found their own way of celebrating the Winter Solstice, that point in the year when the sun reverses its southern course and days begin to lengthen. This event marks the beginning of a new year and new possibilities. Bluff, as usual, has found its own unique way of celebrating the shortest day of the year. 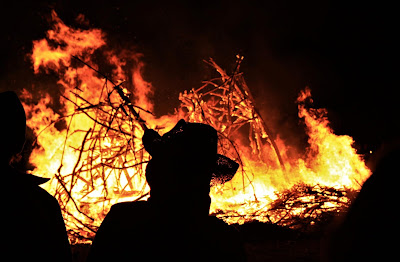 The ancient Druids of the British Isles based much of their culture around the sun’s annual renewal. The great Stonehenge is a vast altar where masses of people made pilgrimages to observe the setting of the sun between the stone columns. The burning of a large willow sculpture, called Wicker Man, was a regular and important part of their celebrations.

For decades, the people of Bluff gathered their dead branches and downed limbs and brought them to an open field in the center of town. There, on New Year’s Eve, folks gathered and torched the dead foliage. Eight years ago, that tradition was remade by Bluff artist Joe Pachak.

Joe is a talented, experienced, and hard-working sculptor, and he came up with a better use for the discarded wood. He began designing, with the help of many local volunteers, and creating huge, woven-willow sculptures made for the express purpose of burning. He focuses on monumental depictions of Southwestern animals, some soaring more than 40 feet high. Joe’s first flammable piece was an elk, followed in later years by a mammoth, a bison, a desert bighorn sheep, a pair of blue herons, and a team of dancing bears. Last year’s effort was a gigantic wily coyote, and this year the subject will be two ravens.

His initial structural work begins during the annual Bluff Arts Festival in October and volunteers regularly show up for the next few months to work under Joe’s direction and add to the effort. This year, construction has made good progress and everything will be ready for the conflagration on the evening of December 21, with festivities beginning around dusk. 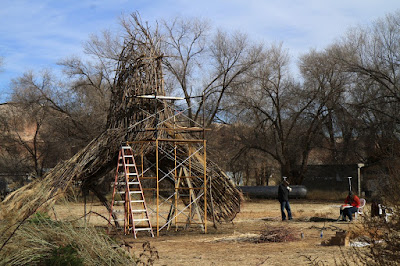 Creating works of art made specifically for destruction might not seem logical, but worldwide, many sculptures are made just for that purpose. Referred to as Ephemeral Folk Art, people are familiar with temporary creations like snowmen and scarecrows. The beautiful sand paintings used in Navajo Healing Chants are created to be destroyed as part of the ceremonies. In a sense, so is Joe Pachak’s work. 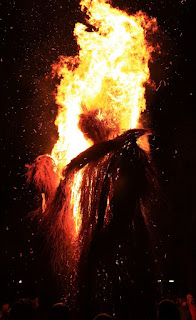 People begin arriving at Bluff’s Winter Solstice as the sun and temperature begin to drop. While people mingle and final preparations are completed, the crowd entertains itself with impromptu drumming, free-form interpretative dance numbers, and gossiping. Anticipation grows until Joe rather reluctantly addresses the audience, and the festivities begin. Usually, flaming darts are launched with a prehistoric atlatl into the dry-brush sculpture, which explodes into an inferno in minutes.

These days, the audience has grown well past Bluff’s usual 250+ population, with folks arriving from Durango, Farmington, and more exotic locations to take part in the inflammatory event.

As the fire grows, the fragile wooden sculptures are consumed by flames and collapse into a fiery heap. Red heat radiates on everyone’s face and what had been a chilly environment grows suddenly warmer. As the flames lower, a curious parade begins to unwind. 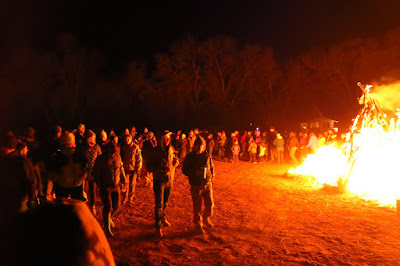 Almost as one, the audience begins to slowly circle the bonfire, moving together in a counter-clockwise direction. Many stay to enjoy the fire until only glowing embers are visible. This piece of neo-pagan choreography seems the proper response to this annual gathering of different individuals becoming a temporary community, if only for an hour’s duration--- the very definition of the word ephemera. Later, folks begin to depart and look forward to what Joe Pachak plans for next year, when once again the ancient wisdom of the ages will be repeated: “When in Bluff, do as the Bluffoons do.”
Posted by Tied to the Post-Twin Rocks Trading Post at 2:31 PM No comments: