A Penny Found, A Penny Lost

Not long ago, I was with my wrestling team in the central Utah town of Gunnison, when I noticed a penny lying in a snowy parking lot. As I picked up the coin, I was reminded of a women Jana and I loved and a story I wrote about that Penny many years ago. Having gone back to review the story, I thought it would be fun to reissue the message as a reminder of what it was like at the trading post 15 years ago. So here it is as originally published:

It was January 1, 2005, and I wanted to start the year off right, so I pulled on my running shoes and left the house early. As I walked across the trading post parking lot to begin my run, I spied a penny lying on the ground. Rose always says, "See a penny, pick it up, all day long you'll have good luck." 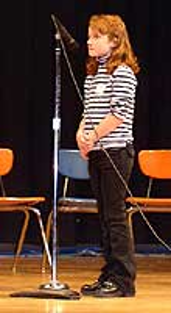 Although I am not generally superstitious, I have a great deal of confidence in Rose and her advice, so I picked up the coin and zipped it into the pocket of my wind breaker. I could not help thinking, "Here it is 7:00 a.m., New Year's Day, and my fortune has just increased dramatically; it's going to be a good year."

Since the year was brand new, I began hoping the penny might have some special power to carry me through the next several months. I had an enjoyable run that day and started to think there might actually be something exceptional in my find. When I returned home, I placed the penny in a safe location and waited to see what would happen. The year progressed nicely, and my faith in Rose and the penny began to grow.

A few months after my discovery, as Jana, Kira, Grange, and I climbed into the car to attend Kira's spelling bee competition, she stopped mid-step and said, "Dad, I need a lucky penny." Instantly, I thought of my special coin. Although I was a little worried it may be lost, Kira had gone from school champion, to district winner, and was now competing on the regional level; under the circumstances, I figured she might really need the magic coin. It also seemed a good test for the penny, so I trotted back up to the house, dug it out of its hiding place, and gave it to Kira.

As I sat in the audience, nervously watching Kira spell her way into another first place finish, my mind drifted back to a time before she was born. I smiled to myself, thinking about another Penny with unusual magic and a beautiful spring day in May of 1996. At that time, Jana and I had been married just over a year, and her stomach was swollen with our first child, which was due to arrive any day. We had stolen time away from the trading post to see a movie in Cortez, Colorado, and were meandering south on Highway 666.

For the past eight and one-half months, Jana and I had been trying to agree on a name for the new addition to our family. In spite of what I thought were very practical arguments to the contrary, Jana did not want to know ahead of time whether the baby would be male or female. As a result, we needed names to address both possibilities. After lengthy discussions, we agreed on Kira if the child was a girl, but had not decided on a boy's name.

Just north of Cortez, we passed the small town of Lewis. A picture of Barry, Craig, and me sitting at a silversmith bench, making "Indian" jewelry, and listening to the radio popped into my mind. I could almost hear the DJ at KUTA-AM 790 announcing a dance to be held at the Lewis Grange. "Grange!" I thought. "Now that's interesting." I liked the name because it reminded me of our friends Bill and Penny Grange, but thought Jana might object; she had vetoed all my previous suggestions. I was still smarting from her rejection of the name Santiago, which I thought was a masterstroke.

Bill and Penny had stopped into the trading post shortly after we opened in 1989, and I liked them immediately. They were a wonderful sixty-something couple in a Chevrolet Suburban and Airstream trailer. Penny was cantankerous enough to be interesting, and Bill was independent enough to enjoy the challenge. I think it was their character and unwavering commitment to one another that endeared me to them. It may also have been that they were extremely encouraging at a time I needed support.

Bill was interested in Navajo weaving and wanted to learn all Priscilla and I knew about the subject. It did not take long for him to realize Priscilla was the real source of knowledge, and I was a shallow well. Year after year they returned to the trading post, and my affection for them grew.

Penny had been raised in Christchurch, New Zealand, and Bill was a Utah boy who had met her while doing church work. Although Penny was a few years older than Bill, they had fallen hard for each other. Penny was pretty and petite and Bill was tall, handsome, and gentlemanly. Although they seemed a physical mismatch, emotionally they were genuinely cohesive. Not that they always agreed, because they quite often did not. That never seemed to matter to either of them. They respected one another even when their opinions diverged.

During their visits, Priscilla tutored Bill, and he eventually became an accomplished "Navajo" weaver. Penny began to sketch designs for Bill to execute. They were a good team, except when Penny sketched angular designs, which she argued Bill could execute and he insisted he could not.

As I watched them age, I knew they would eventually be lost to me, and I also knew I would miss them greatly when they were gone. As Jana and I sat in the darkness of the movie theater, I said, "What about Grange?" She seemed confused, so I explained that I had been thinking about the Lewis Grange and Bill and Penny. If our child is a boy, I continued, I wanted to name him Grange. To my surprise she agreed. Although we had to wait another three years, because Kira arrived first, when our son was born, he was named for Bill and Penny.

When Penny's health began to decline, their trips from Boise, Idaho, to southern Utah slowed. I am reminded of them each day, however, as our son skitters in and out of the trading post. When I look into his freckled face, I see the reflection of those dear friends. The last time I telephoned Penny, she seemed excited to speak with me. As she handed the phone to Bill, however, I heard her ask, "Who was that?" At that moment, I knew Penny had begun to cross the Rubicon, and my heart broke. 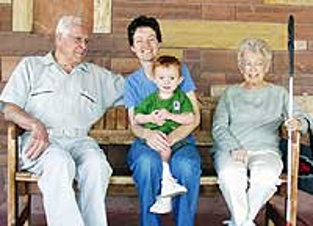 After our telephone conversation, I frequently envisioned Penny's journey through the winter of her life as I ran through the cold, inky-black mornings. I could often see only a few feet ahead and had to be careful where I placed my next step, just as Penny also had to be cautious. As I have learned, and as Penny must have known, certain things are more profound and more easily understood in the darkness. With spring on its way, there is better light during my runs. Penny recently made her journey north to the Spiritland, and I am sure she has also found additional light. I have lost my favorite Penny, but her memory continues to reside in a special corner of my heart.

Posted by Tied to the Post-Twin Rocks Trading Post at 3:17 PM