Reviewing some of the historic Twin Rocks Trading Post photographs recently, I was reminded of a time 15 years ago when Carol Edison from the Utah Arts Council asked if I would get together a few Navajo baskets and journey to Salt Lake City for the Folklore Society's Annual Convention. Carol wanted to spread the word about the beautiful baskets being woven in Monument Valley and thought the conference would be a good forum. We had previously done something similar at the Brigham Young University Museum of Art. The Museum of Art event had been great fun, so Carol hoped to recreate that same excitement for the folklorists. 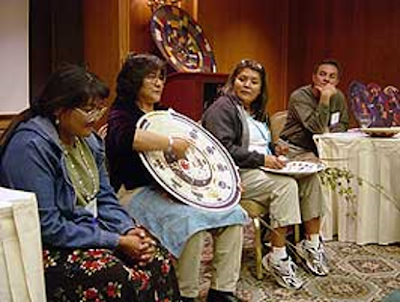 Peggy, Lorraine, and Joann consented, so the four of us traveled north for the big event. Before the lecture, I spent a little time walking around a display of photographs Carol had arranged in an exhibit room. Many of the pictures had been taken early in the contemporary basket movement and featured members of the Black family.

Peering out from the frames were much younger versions of these individuals, and I was struck by how the images highlighted the changes that had occurred in all of us. In the photographs, my traveling companions were not much more than teenagers. They had since become wives, mothers, breadwinners, and much more. Those images stuck in my mind, and kept reminding me how much things had changed.

I often reassure myself that rather than fearing such changes, I am actually fascinated by them. Although it may simply be justification for my ever-evolving physiology, to me it often seems the more round we are, the more rounded we become. I am reminded of the beautiful cluster jewelry many elderly Navajo ladies wear. The silver sheen of these bracelets, pins, and necklaces softens over the years, and the rough edges are worn smooth. The sky-blue stones often become deeper shades of blue and green due to the absorption of the wearer’s body oils; each gem developing its own distinct personality. The jewelry, like many people I know, is burnished and smoothed over time.

Looking around the trading post often reminds me there have been significant changes in store personnel as the years speed past. I frequently notice an abundance of reading glasses scattered around the store. In addition to the magnifiers, hot air and big bread baskets are prevalent. Stories circulating through the trading post seem to expand and grow more elaborate with each passing day. 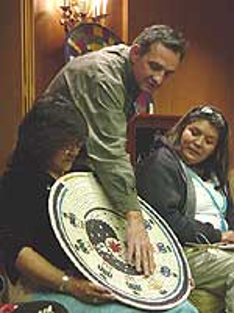 In the beginning, most were simple and direct. Now the tales resemble local housing construction, which usually begins with a small, centralized area. The core is then enlarged by adding different sections in an ongoing process; a bedroom here, a dining room there. After a while, you have a messy, but functional, conglomeration of curious composition. I sometimes catch people looking at us the way I see them looking at those houses---with a profound look of disbelief.

In addition to growing stories, personal growth has also become a central theme. Although we all adamantly maintain we are closely watching our diets, bread baskets are expanding faster than the business. When the progress and the additional fabric necessary to conceal the development is noted, there is generally a period of denial and grumpiness followed by continued expansion. 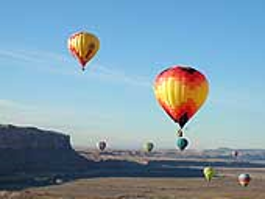 Recently, the balloons once again arrived in Bluff. During this annual celebration, we are treated to good company, exciting stories, bursts of hot air, and volumes of colorful fabric over large baskets. The balloons make me realize there really is a future in ever-expanding subjects, hot gasses, and big baskets, so pass the M&M's, order me some larger trousers from Amazon, and keep in mind that, despite what you may have been told, honesty is not always the best policy.

With Warm Regards,
The Twin Rocks Team
Posted by Tied to the Post-Twin Rocks Trading Post at 5:10 PM