Although I cannot imagine why, last week, day and night, night and day, John Denver’s song entitled Back Home Again continued to circulate through my consciousness, especially the part about the storm. You know, “There’s a storm across the valley, the clouds are rolling in.”

With that song running constantly in my mind, last Wednesday I traveled to St. George for a meeting the following morning. Life at Twin Rocks Trading Post has been challenging lately, so I decided to leave earlier than planned. Since I had extra driving time, I slowed the car from its usual frantic pace and focused more attention on the extraordinarily scenic land formations, canyons and mesas of the greater Colorado Plateau.

As the sun meandered slowly toward the western horizon, I approached Page, Arizona, a small community perched on buff colored cliffs overlooking Lake Powell, the second largest man-made lake in the United States. Even though I have seen and boated this twisting, snaking reservoir hundreds of times, I am always amazed by the disconnect between the vast stream of water flowing through its gorge and the parched sandstone desert extending hundreds of miles in every direction.

As I approached the town, off to my right were the towering smoke stacks of Navajo Generating Station, a 2,250 megawatt coal-fired power plant located on the Navajo reservation. On my left was Antelope Canyon, the most visited and most photographed slot canyon in the American Southwest, contrasting natural beauty and necessary evil.

What caught my attention that particular evening, however, was not the slotted drainage, the crystal water body or even the murky gray emissions that smudged the sky. Instead, a dark and foreboding cluster of clouds that embraced the landscape several miles south and west of the asphalt path I navigated captivated me. The extensive darkness streaked towards the desert in what must have been a heavy stream of nourishing rain. Surely the cactus, sage, yucca and other thirsty vegetation inhabiting that particular geographic location were relieved, and gratified.

As the clouds spent themselves and began drifting apart, the late afternoon sun flooded through, dappling the prehistoric reefs with clean, clear, golden rays. Someone once told me sunshine like this was called “God light”. With that thought in mind, my spirits lifted and I imagined I could hear Little Orphan Annie singing in the distance, belting out her trademark song: “The sun’ll come out tomorrow, bet your bottom dollar that tomorrow there’ll be sun”. Good-bye John, hello Annie, the dawn is breaking at Twin Rocks Trading Post.

Visit our Great New Items that we have acquired this week!
Posted by Tied to the Post-Twin Rocks Trading Post at 1:36 PM No comments:

As far as we are concerned, Bluff City, Utah is the epicenter of the American Southwest. Although our world is a desert most often marked by little or no precipitation, we cherish this land. "Bone dry" is a term regularly used to describe our homeland. In late July, August and sometimes early September, we receive an occasional ravishing thunder-buster with accompanying flash flood. The Navajo people call this fast moving, crashing type of monsoon mania, “male rain”. What we cherish most, however, and are seldom blessed with, is the female variety of rain shower. Female rain is slow, soothing, long lasting, nourishing. 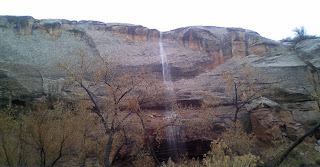 Coming from such a dry climate, we are extremely grateful for moisture and find it much more than refreshing and cleansing. We think of it as "holy water". To better explain the extent of our feelings, I refer friend of mine. To protect his identity, we will call him Ben. Anyway, Ben is drawn to rain-showers. No matter where he is or what he is doing, if moisture begins to fall he will walk out into the rainstorm, kick free of his footwear, turn his face and palms to the heavens and say a prayer of thanks while wiggling his toes in the mud. There was a time, in his younger years, when Ben would completely disrobe to express his gratitude. After an arrest and conviction for public indecency, a short stint in the local gulag and probation, Ben modified his communion with nature. Such is our love affair with rain.

Long ago, some of our other friends, Perry and his brother Ray, also had a fling with falling water, causing them to discover its power. It was mid-summer, hot as a pistol, and everything and everybody was sweltering. Toward the end of the day, the heat brought on a theatrical thunderstorm accompanied by heavy rain. Perry and Ray made a mad dash for Cow Canyon and the waterfalls they knew would appear at any moment. Scampering up through the jumble of rocks and brush at the base of the cliff, they regrouped in the catch basin of a slick rock pour-off. There they stood, anticipating a cooling summer shower. Above their red heads, the water ran swiftly across the roiled surface of the bluffs, gathering momentum as it came. What the boys realized all too late was that such waters sweep-up everything in their path and bring it along for the ride. Over the brink rushed the water, carrying with it mud, sticks and stones and every other thing that might break one's bones. I understand the experience was a real eye opener for them.

As kids Craig, Steve and I realized that rainfall filled the curious voids found in the local sandstone, so we would seek out those natural cavities and slip in to cool our heels and sunburned heads. If the water wasn't stagnant, it was fair game. Some of those potholes were as big as an upright surface sitting swimming pool, with sides tall and steep enough to trap the unwary. An old rope tied to a nearby boulder would usually suffice as an escape route, and it was rare indeed that one was too deep for three boys stacked feet to shoulders. There was a time or two when we would have to strip down to our whitey tighties, lay flat-out on the sandstone sides and inch up using fingers, toes and every square inch of exposed skin to grip the steep slope. You loose a little hide that way, but escape is generally assured.

Being born to a particular part of the country almost guarantees you will bond with it. Like a mother to her child, that connection is hard to break. This little river valley in the midst of the high desert has held Ben, Perry and Ray, my family and countless others to her rocky bosom. No matter where in the world we reside, we are Bluffoons and darn proud of it. As with the holy water that, albeit infrequently falls from the heavens, the sandstone, sage and red sands course through our veins.


Enjoy artwork from our many collector friends in Living with the Art!
Posted by Tied to the Post-Twin Rocks Trading Post at 11:57 AM No comments:

What is change, and why do we fear it? The dictionary defines the term as, “to make the form, nature, content or future course of something different from what it is or what it would be if left alone.” In isolation, that concept does not seem so frightening. On a personal level, however, most of us do not like the thought of altering course or making our things or ourselves different from what we have come to know and expect. Change be damned! We want everything to stay the same!


In our last Tied to the Post, Barry and I explored the issue of whether traditional trading posts and Indian traders exist in contemporary society. Our readers were exceptionally supportive, and agreed trading posts and traders are not truly extinct, they have simply evolved. As with many issues, it is difficult to know if the friends were right and we are still part of the same overall plan or whether our mutations have made us into something altogether unexpected, an as yet unknowable quantity.

Lately Barry, Craig and I have been talking a great deal about change, and what the future of Twin Rocks Trading Post and Twin Rocks Cafe should look like. Make no mistake, the Great Recession has caused us to reevaluate who we are, what we want to be and what we need to achieve if we are to survive.

While we have historically positioned ourselves as existing at the intersection of tradition and innovation, we, like most, do not know how to adapt. As a result, the economic changes spreading across America and the world since 2008 have frightened us into stasis. Tourism and the trading post business are unlike anything we have previously experienced in our over 20 years of existence. In fact, although we have discussed many alternatives, we have found it impossible to settle on any particular solution.

Deepak Chopra once said, “All great changes are preceded by chaos.” If that is indeed the case, we are looking at monumental alterations in life as we have come to know it at Twin Rocks. The confusion is palpable at 913 E. Navajo Twins Drive, Bluff, Utah.

Many years ago, at a particularly difficult time for both of us, Lorraine Black brought in a basket she and I jointly titled the “Chaos Basket.” When Kira and Grange, the Traders in Training, recently reacquired the weaving, Lorraine and I were both surprised to find we could now laugh at the events of that long ago time. The basket did not seem so powerful.

While Barry, Craig and I are sure we are experiencing unmanageably rough seas, as Andre Gide said, “Man cannot discover new oceans unless he has the courage to lose sight of the shore.” Hopefully, like Lorraine and me looking at the Chaos Basket all these years later, in the future Barry, Craig and I will smile warmly when we think of the events of today. Wish us luck; we are in uncharted waters.


Enjoy artwork from our many collector friends in Living with the Art!
Posted by Tied to the Post-Twin Rocks Trading Post at 4:55 PM No comments: