Weaving a Revolution: A Celebration of Contemporary Navajo Baskets

In an effort to add outside perspective to what goes on here at the Trading Post, Steve and I sometimes let others take the podium.  You might find those of us not, "Tied to the Post," more believable than those of us thus bound.  Please accept this story by Kristen Moulton of the Salt Lake Tribune as this week's article. Visit the link below:

Enjoy artwork from our many collector friends in Living with the Art!
Posted by Tied to the Post-Twin Rocks Trading Post at 3:37 PM No comments:

Lately I have been reading a great deal about trading posts in general and Indian traders specifically. This investigation has led me to question, “What exactly is a trading post and what is it that makes one an Indian trader?”

When it comes to these twin issues, you cannot even get out of the chute without finding yourself in hot water. “Indian trader”, in and of itself, is a racially charged term. Shall we call ourselves American Indian traders, Native American art dealers or any one of a number of other terms that ebb and flow with the politics of the day? And just what, may I ask, is being traded? Does it count as “trading” if you don’t deal in groceries, tack, pots, pans, livestock or wool; if you only sell arts and crafts; and if you always pay cash for what you buy?

As I worked through these questions, evaluating them in the context of Twin Rocks Trading Post, I was surprised to discover that many anthropologists and experts in the field agree there have been no traditional trading posts since the 1970s. Taken to its logical conclusion, this means there have also been no traders for approximately 40 years, i.e., no trading posts, no traders.

What this surely means is that Barry and I may have been extinct before starting this project and we didn’t even know it. Since 1989, when Twin Rocks Trading Post was established, if asked what I do for a living, I have universally answered, “Indian trader”, “trading post operator”, or “trading post lawyer”. Depending on the circumstances, most people simply nodded their heads in affirmation and the conversation continued from that point.

As my concern deepened, I mentioned this dilemma to our friend Carole. One cannot be expected to deal with such weighty issues without support. Carole’s response heartened me. Having carefully considered the facts, and after weighing both sides of the argument, Carole responded, “Oh, you care about the artists and work to make things better for them. That makes you an Indian trader.”

I could not, or maybe did not wish to, argue Carole’s point. If there is one conclusion the reading I have done unanimously supports, it is that an essential trait of a successful trader is the desire to improve the lot of his patrons. This was true of Don Lorenzo Hubbell of Ganado Trading Post, J.B. Moore of Crystal, Thomas Varker Keam of Keams Canyon and all the other Indian traders whose names survive to be discussed in contemporary society. I cannot, however, help thinking, “Is that enough? Social workers and therapists have that same characteristic, but they are not Indian traders.

Barry and Priscilla have been brought into the conversation, but questions about barter, sheep, pawn and geography, persist. “Maybe we are not extinct,” Barry suggested, “maybe we have just evolved.” I think he was trying to be optimistic. After all, if it turns out we really are extinct, there is nothing left to discuss.

Great New Items! This week's selection of Native American art!
Our TnT's purchased new treasures! Check out Traders in Training!
Enjoy artwork from our many collector friends in Living with the Art!
Posted by Tied to the Post-Twin Rocks Trading Post at 1:17 PM No comments:

A Muse to Dwell Upon


It was Friday, the 4th of January 2013, and golden beams of early evening sunlight pierced the picture windows at the front of the trading post. The glow bathed the interior of the store in a rich, cheerful light that spoke of a warm and comfortable day's end. Outside the Kokopelli doors it was a frigid 24 degrees and getting colder as the setting sun sought the western horizon. The scene caused me to flash back on Grandpa Woody. I could see him standing there in his well-oiled work clothes, grumbling about having to go out into the night to complete a chore. Grandpa was a master mechanic and a wizard with heavy machinery. At his point of departure he would whistle lightly and let fly his patented cold weather metaphor: "It is colder than a witch’s [bosom] in a brass bra." Then he would disappear into the cold's frosty embrace. Ain't it funny how those inappropriate phrases stick with you?

There were two couples in the trading post, wandering around while oohing and aahing at the displays. The older pair was 60-something with naturally greying hair. They were both dressed in Levi 501 jeans, button down shirts, light jackets and loafers. They looked fit and trim, like they were exercising regularly and ingesting more health shakes than malted milk. The younger couple must have been in their early 30s, because their cheeks were still pink and their step light. They too were dressed similarly with khaki's, pressed shirts, Eddie Bauer jackets and low top hiking shoes. I don't believe the four of them were traveling together; they seemingly just wandered in the trading post at the same time. Everyone was getting along nicely; the mood was light and the conversation lively.

I had just finished explaining the construction of a Will Denetdale pendent to the younger couple when the older fellow walked up closely, spread his arms as if taking in everything in the store, and asked, "Where does all this come from?" "Oh no!” I thought to myself, "this guy is going to ask if our inventory was made in China or Taiwan and I am going to have to box his ears." In a slightly patronizing tone, I began to explain that everything in the store was handmade by local artists with high grade, natural materials, but the guy cut me off by shaking his head from side to side. "I recognize and understand that, " he said patiently, "but where does the inspiration come from, the creativity that allows these artists to produce such wonderful works of art?" "That," I said, "is an interesting question, and tough to answer."

"Do you mean, does it come from the heart, the head, the soul or is it gifted by deity?" I asked. "Yes, just that!" the man exclaimed excitedly. The older man's wife walked up with a smile on her face and explained that she had heard the ancient Greeks believed divine attendant spirits were responsible for advanced creativity. "I heard that too," I mentioned, "and the Romans believed supernatural geniuses helped them out with grand leaps of creativity." I told the group I was not certain what inspired the artists. I did know that many of them believe their creativity comes from a close association with the natural world. The Navajo people believe they emerged through several inner earthy realms and were eventually born into this world from within the Earth Mother. Because they are of the earth, they see it, touch it, embrace it and portray it in a manner unfamiliar to us. Variations of light and color are visualized and portrayed differently as well, and benevolent deities include such things as the Sun, Moon, Thunder, Lightning and the like.

The two couples and I had a pleasant and stimulating conversation which ended all too soon with the emergence of the moon. We said our goodbyes as I closed and barred the Kokopelli doors for the night. As I did so, I thought of Grandpa Woody again, and the thought occurred to me that Woodrow Wilson Simpson was a creative genius in his own right. When it came to tearing down and rebuilding a piece of heavy machinery to better than new status, there never was nor never will be anyone better than Woody; at least in my heart and mind. The conversation I had with those people made me wonder if the busty sorcerous with the metal breast plate he so often referred to just might have been his own personal mechanical muse . . . who'd have guessed?

Enjoy artwork from our many collector friends in Living with the Art!
Posted by Tied to the Post-Twin Rocks Trading Post at 9:29 AM No comments: 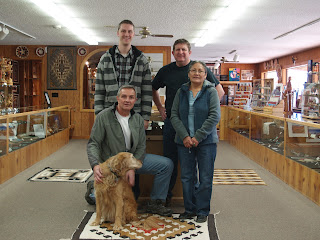 FROM DANNY, PRISCILLA, BARRY, STEVE, BUFFY AND THE REST OF US.
HAVE A GREAT NEW YEAR.


Our TnT's purchased new treasures! Check out Traders in Training!

Enjoy artwork from our many collector friends in Living with the Art!
Posted by Tied to the Post-Twin Rocks Trading Post at 2:50 PM No comments: