They Are People Too!

The heavy rains had come a week earlier. As a result, the weeds were pressing in on the trading post. I had put off attending to the ever-increasing patch longer than I should and they demanded attention. The morning was bright and sunny, so I decided it was time to act.

Pulling on the working gloves Bob “Grasshopper” Lach, our friend from Chicago, had sent after Barry’s last story about Grange, I prepared for my assault on the invaders. Bob had actually sent two pairs to Grange, and I had nabbed one set shortly after they arrived. Grange initially objected, but finally gave in when I explained I needed them to help complete his Eagle Scout project, some of which included removing trash from approximately four miles of highway.

The driver wore a loose fitting tie-dyed T-shirt emblazoned with a peace sign, looked a bit like Jerry Garcia from the Grateful Dead and likely had come of age during the 1960s. He leaned over, gave me a friendly wink, switched off the car and headed into the cafe for breakfast. As I sat there uprooting noxious plants and scrutinizing this visitor from era of Vietnam, free love and Woodstock, a beat-up Reservation car lurched to a stop just west of where I had seated myself. 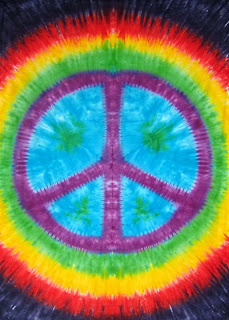 Two sixtyish Navajo women got out of the jalopy and headed my way. Sitting down on one of the boulders next to me, they asked, “Do you know where Lena Poyer lives?” “Of course I do”, I responded, “I used to buy rugs from her.” “She lives over there”, I said, pursing my lips in the Navajo way and indicating south towards the Reservation.

One of the women explained she was Lena’s relative, but had not seen her in decades. The woman had moved away, to live among the “whites”. Feigning disappointment, I said, “Really, you left us for those guys?” “Yea,” she said, “I married one too. My kids are half. Even my nullies (grandchildren from your son) are white.” This time I acted even more disappointed that she had traded the Reservation for the Anglo world.

The woman seemed to have assumed I was serious, and that I was at least part Navajo. Maybe it was my Portuguese ancestry, which gives me darker skin, or maybe it was the way I indicated direction with my lips. In any case, she looked at me in earnest and said, “Well, they are people too!”

The Navajo ladies left to continue their search, and a few minutes later my guest from the 60s strolled out to his car and fired it up. As he backed out into the street, the stereo kicked in, and I heard Sly singing, “We got to live together.” I couldn’t help thinking that insight often comes at unexpected times and from uncommon messengers.

With warm regards;
Steve, Barry, Priscilla and Danny; the team.
Posted by Tied to the Post-Twin Rocks Trading Post at 3:31 PM No comments:

Barry and I are proud to be small business owners. In fact, it would be fair to say we love giving people the business. Sure we have dreamed (maybe fantasized would be a more accurate term) of one day having a Fortune 500 company. We do, however, recognize that being located in a town of 250 people limits our opportunities.

Like many budding entrepreneurs, when we established Twin Rocks Trading Post, Barry and I were convinced our latest endeavor was destined to set the world on fire. We have, however, come to understand we are only fortunate enough to throw off a spark every once in a while. We know the likelihood that one of those cinders igniting a financial inferno is, well, unlikely. Nonetheless, like Boy Scouts on a camp out, we continue to put flint to steel, hoping for a flame.

According to a recent University of Vermont study, the life expectancy of family-owned businesses is 24 years. Twin Rocks Trading Post has now been in existence for . . . you guessed it, 24 years. Sure that fact has caused us some concern, and even a few sleepless nights. The Kokopelli doors are, however, still open, and, like the broader economy, our fiscal health is constantly improving. We have discovered that, in this instance, average is not so bad.

When we look back over the history of the trading post, we are amazed how far we have come, and aware how far we still have to go. In the early days, Barry was still at Blue Mountain Trading Post in Blanding, and Duke, Priscilla and I “manned” Twin Rocks. Duke was approximately the age Barry, Priscilla and I are now.

Having come from a career in the secondhand business, Duke was fond of going to the swap meet in Phoenix to find “bargains." Priscilla and I indulged his habit until the day he brought back an entire pickup load of futons. When we objected, saying the beds had nothing to do with turquoise jewelry or Navajo rugs and baskets, Duke defended his decision by pointing out the mattresses had Southwest designs.

Realizing we were stuck with them, every day we packed the futons out onto the porch in the morning and lugged them back in at night. After a time we began worrying our backs would give out before we found takers for Duke’s treasures and began leaving them outside overnight to see if someone would steal a few. They didn’t.

While it took us a while to comprehend why Duke liked the beds so much, we did eventually discover the answer. That happened one afternoon when a customer excitedly entered the store to inform us a man was outside sleeping on our inventory. When Priscilla and I checked into the situation, we found Duke napping peacefully in the late afternoon sun.

Having reached his middle 70s, a few years ago Duke retired from Twin Rocks. Having reached our middle 50s, Priscilla, Barry and I have begun searching for futons, with Southwest designs.

With Warm Regards,
Steve, Barry, Priscilla and Danny; The Team.
Posted by Tied to the Post-Twin Rocks Trading Post at 4:49 PM No comments: