Since Susie and I (Rick) moved back to the Four Corners six months ago, we have again been amazed by the people, places and events that only seems to occur in this entirely unique corner of the world. At one of our Sunday morning breakfasts with Steve, Susie commented, “Bluff, this community is different.” As usual, Susie is right.

To celebrate the season, I have decided to re-work an old classic song of the holiday season. So here it is, Rick Bell’s version of the Twelve Days of Christmas – Bluff Edition.


Posted by Tied to the Post-Twin Rocks Trading Post at 2:33 PM No comments:


Customers to Twin Rocks Trading Post all too often ask, “How can you live in such a small town? Don’t you get bored?” Although Barry and Priscilla generally try to stop me, I, all too often, reply, “No, only boring people get bored!” Like Kira and Grange when I give them similar advice, the inquisitors shake their heads and look at me as if I’ve lost my mind. 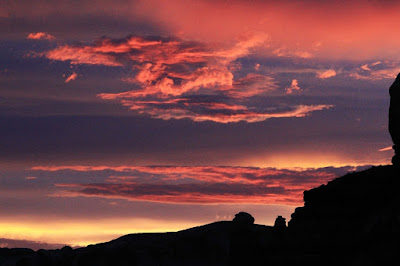 At times like that I am inclined to continue with, “I’m just sitting here watching the wheels go round and round.” Quoting John Lennon songs to our patrons, like sending letters expressing controversial opinions to the editor of the local paper, always sets Barry off. Consequently, I try, most often unsuccessfully, to restrain myself. Barry worries I will eventually alienate the entire southeastern Utah population of travelers and permanent residents. If that happens, he argues, there will be no more sales of Navajo rugs and turquoise bracelets, and no Navajo tacos or hamburgers either. Then the mortgage goes into default and it’s the breadline for these two over-50, unemployable Indian traders. “Well, we have been poor before”, I remind him. That, however, gives him little comfort. Barry, being a worrier, takes no solace in Oscar Wilde, who said, “The only thing worse than being talked about is not being talked about.”

One has to wonder about the experiences of those inquiring individuals. What is it they see when they look around Bluff? Can they only comprehend what is absent; congestion, stoplights, big box stores, miles and miles of asphalt, and not what is actually here? Is their view so narrow they cannot imagine what it feels like waking to extreme quiet and absolute peace? Do they overlook the extraordinary sunrises and sunset, unobstructed by manmade obstacles and layers of pollution? Do they not see the smiles on our faces, rather than stress lines etched deeply into our physicality? Do they not comprehend the slow pace, which allows us to more thoroughly enjoy the people and things we come into contact with each day?

On the recent Thanksgiving day I was happily reminded what it means to live in rural America. Jana had gone to Albuquerque to visit her 96 year old mother, so Grange and I were left to manage the domestic empire. We were boiling and mashing potatoes in preparation of the annual Simpson family feast, discussing proper ingredients and desirable consistency, when I stepped outside to get a breath of fresh air and cool my jets. As I did, in stereo I heard, “Hi Steve!”

Coming west on lonely Mulberry Street were Francisca, Santiago and Molly, tweens or early teens who have been raised in this community and who roam freely among its residents and through its landscape. “Hi guys”, I responded, excited to see them, “Happy Thanksgiving.” They steered themselves into the yard and each in turn gave me a hearty hug. I tousled Santiago’s newly mown hair and thought, “You’re not going to get that in the big city, where every child is taught ‘stranger danger’ and every parent is paranoid.” While I understand and appreciate the concerns, I am pleased that here in the heartland we have more freedom to honestly and openly express our affection and love for each other.

When Francisca was just a little girl, during lunch at Twin Rocks Cafe, she would abandon her mother in favor of the trading post. Upon arrival, she would climb up on the high stool in front of our computer and say, “What we going to look at today Steve?” We then proceeded to google elephants, tigers, polar bears and any number of other exotic animals or current events she wanted to know more about. After a while Jen, her mother, would come looking. She always knew where to find us. Our research lasted several years, and to this day Francisca, even though she is now a young woman, gives me a hug whenever we meet.

Maybe if those visitors to Twin Rocks who misunderstand life in this small town had similar experiences they no longer would question the logic of living in tiny communities like this. Of course, if they did there would be nobody left to populate the cities. Let us give thanks.

Posted by Tied to the Post-Twin Rocks Trading Post at 11:20 AM No comments: