HAPPY HOLIDAYS FROM THE TEAM AT TWIN ROCKS TRADING POST 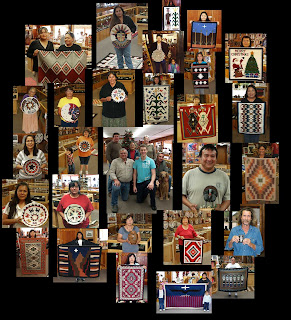 Enjoy artwork from our many collector friends in Living with the Art!
Posted by Tied to the Post-Twin Rocks Trading Post at 1:29 PM No comments:

This week Barry and I thought we would give our readers a gift; a well deserved break from our personal musings. Instead of the yellow journalism we regularly distribute, we are sending you the link to a story that recently ran in the About Utah column of the Deseret News. Its author, Lee Benson, stopped by the trading post a few weeks ago and we started talking. At Twin Rocks Trading Post, talking is one thing we do well. This story is the result of our conversations.

Just as our mothers always advised us, if you brush your teeth and bathe regularly, wear clean underwear and be nice, good things will happen. While I have always hoped that advice would bring a different result, the article is nice. We hope you enjoy Lee’s work and the reprieve. Barry and I will be back next week with all the humor and wisdom you have come to expect from Tied to the Post.

Enjoy artwork from our many collector friends in Living with the Art!
Posted by Tied to the Post-Twin Rocks Trading Post at 11:31 AM No comments:

It was early morning at Twin Rocks Trading Post and a fifty-something year old woman with a pit bull attitude stood across the counter giving me the evil eye. Doggedly clutching a basket by Navajo artist Peggy Rock Black, she stuck out her lower lip and declared, "That's too much!" I could tell she badly wanted the weaving. She did not, however, want to pay my asking price.

Only ten minutes earlier I had taken a beating from Peggy while negotiating to buy the darn thing. Between Peggy and this determined female, I was beginning to feel like a rooster at the annual chicken pull. I looked to her husband for assistance, but he just leaned against the counter with his arms folded across his chest and smiled like the Cheshire cat. I could tell I would find no relief there and guessed these two had played the game before.

The day started well enough. During my drive from Blanding the morning had been bright, beautiful and uneventfully calm. It was Saturday, Steve was in Moab running a 10k with Kira and Priscilla would not arrive until noon. Kathy was next door managing Twin Rocks Cafe and preparing for a Navajo Santa catering that evening. Therefore, at least for the time being, I was handling duties at Twin Rocks Trading Post alone. When I arrived at the store Peggy's pickup truck was idling in the parking lot and she was rattling the Kokopelli doors. "Your late!" she said as I walked up the steps. It was 9:02 a.m. and I was two minutes late. As far as Peggy was concerned, that was two minutes too many. She was not pleased with my tardiness, and her discontent usually translates into more strident bargaining.

As I opened the trading post doors Peggy went to her truck and retrieved a package. When she entered the store I was relieved to see it was a 12" ceremonial basket. I figured this would be easy bargaining compared to what happens when she brings one of her large and elaborate collage baskets. Those can take hours to negotiate. I was, however, wrong! Peggy started-out three times over the price she normally asks for with similar weavings. When I questioned why, she said that by opening late I had scuttled her hopes of getting to Farmington at a reasonable hour. Peggy expected me to pay for what she considered an inexcusable indiscretion. Twenty minutes and several, "That's not enough!" proclamations later we settled on a price. The day was going downhill and it was not even 10:00 o'clock.

As Peggy walked out, the couple strolled in and went straight to the basket. I had been rummaging under the cash register for a price tag, so the weaving was still resting on the glass. The woman picked up Peggy's basket and asked if the weaver who made it had just left. "Indeed she did", I replied. The woman began questioning me about the meaning behind ceremonial baskets, their origin, history, construction and materials. I explained all that and more, describing how the baskets were used by medicine men for healing purposes and how important they are to Navajo people. The woman seemed impressed, and looked questioningly at her husband. There seemed to be an unspoken communication between them and the woman turned back to me, asking, "How much?"

That was when we arrived at, "That's too much!" The woman argued her point admirably, but I was determined to stand my ground. Somewhere deep inside I believed I could win this battle of wills. All the while the Cheshire cat lounged in the background, smiling smugly. Eventually my adversary and I reached an impasse. We were locked in a stalemate and neither of us was willing to budge. I looked from the woman to her husband and back again, all the while considering my options. Having what I thought was an epiphany, I asked the woman, "Are you a gambler?" Looking at me cautiously, she responded, "I have been known to drop a dime or two in the slots." "Alrighty then", I said, "I'll flip you double or nothing for that basket." "Done!" she said.

The Cheshire cat's continence changed in an instant. Pushing himself away from the counter, he stumbled toward his wife. "Wait a minute," he said haltingly, "do you realize what you just agreed to?" "Yes," she stated unemotionally, "I do. If I lose the toss I will pay twice the price. If I win, however, it will cost us nothing." "And you are willing to take that chance?" he asked incredulously. "I am indeed!” the gambler replied enthusiastically. "Well I'm not," exclaimed her man. He then reached for his billfold, took out a credit card and handed it to me, saying, "Ring it up for the regular price please." I ran the card and wrapped the basket. At this point the disgruntled husband left the post mumbling about a bad bet and someone not playing by the rules. As he exited the Kokopelli doors the woman turned to me and said, "Shall we flip just for the fun of it just to see who would have won?" Reaching into my pocket for a coin, I said, "You call it."

Enjoy artwork from our many collector friends in Living with the Art!
Posted by Tied to the Post-Twin Rocks Trading Post at 1:35 PM No comments: