Compared to the Bicycle

As a result of the coronavirus pandemic, a few months ago I decided to get back in shape. That crisis seemed a good reason for me to also shed a few unwanted pounds. Unfortunately, I have started to look a little like Mr. Potato Head, just not as handsome. Mrs. Potato Head has begun to take notice. One of the many complications, however, is that I long ago discovered I can eat and cycle at the same time, so things are more complex than they appear on the surface.

Based upon my latest commitment, I dusted off the old road bike and started working on my conditioning. On one recent evening, I strapped on the cycling shoes and hit the road. Reflecting back to the early days of my cycling career, when every ounce cost precious time, I left the socks out of the equation and put the shoes directly on my bare feet. I briefly thought of shaving my legs to make myself more aerodynamic, but decided that would take too long. Shaving a few cookies or doughnuts from my diet would surely be more effective. 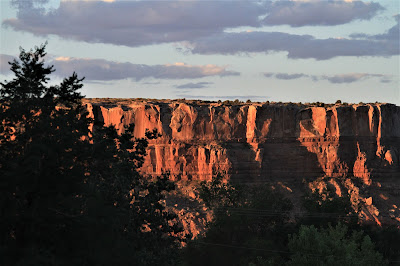 It was about 6:30 p.m. when I finally got everything in order and hit the pavement. The sun was getting low on the horizon and the air was cool. I rode west from Bluff, towards Monument Valley. As I turned to make the return trip, the sunlit cliffs reminded me why I love this naturally walled village in the San Juan River Valley so much. The sandstone bluffs, for which the community is named, were glowing a misty pink, and the various formations faded into shades of gray and black as they receded into the distance. I searched the eastern horizon for the Sleeping Ute and finally noticed his nose protruding just above the southeastern cliffs. The valley was "lit up."

My bicycle is over 10 years old, which makes it a veritable dinosaur in terms of modern technology. In its time, it was a marvel of transportation engineering---but things have changed. Heading east, I began to consider the parallels between the old bicycle and me. That started me thinking about the tires, and how we both tend to lose a little air, which at times can be inconvenient.

When I first moved back to San Juan County, Twin Rocks Trading Post was still under construction, so I lived in Blanding. Every day my father and I would drive to Bluff with the bicycle in back of his truck. After working all day with Jim Foy, the building contractor, digging trenches, building walls, and pounding nails, I would climb on the bike and ride north to Blanding. The bike and I were a well-oiled machine, working in perfect harmony, Hozho, as the Navajo people like to say. I would make the 25-mile, 2,000-foot climb, in just over an hour. The bicycle was tuned to perfection, and my legs worked like pistons, pumping the pedals up and down. 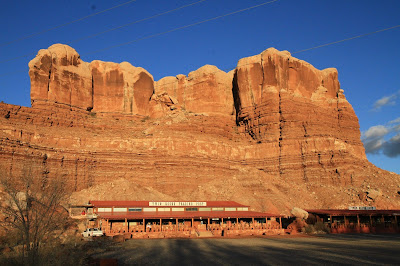 Family, the business, and a new daughter distracted me over the next few years, and the bike gathered dust. Then one day I was diagnosed with a terrible illness, the dreaded furniture disease. It was my father, William "Duke" Simpson, who first recognized the symptoms. That tire around my waist began to inflate, and Duke, a renowned expert in the field of furniture disease, pointed it out to me. Of course, I suspected it all along, but was in denial. I attempted to hide the malady, and stay its effects with protein concoctions, but nothing worked. For a time, I considered wearing moo moos, but couldn’t find patterns or shades that complimented my skin color. Bluff was, and still is, devoid of adequate retail clothing options, and Cortez, Colorado, and Farmington, New Mexico, are a substantial drive from this community. It was not like you could order moo moos on the Internet, which did not yet exist.

In the more progressive medical texts, furniture disease is described as the condition where, "[O]ne’s chest falls into one’s drawers." As in my case, the onset generally begins in one’s early to mid-thirties. Serious disfigurement can occur. Once trim bodies begin to sag, and cycling performance drops in direct proportion to the sagging. It becomes hard to work the pedals with all that weight pushing down on your thighs. Actually, the down stroke is fairly easy, it’s the upstroke, which requires lifting all those extra pounds, that can be difficult. Balance is also greatly affected. My ever-evolving shape manifested in a less aerodynamic configuration and interrupted airflow, resulting in significantly less performance. 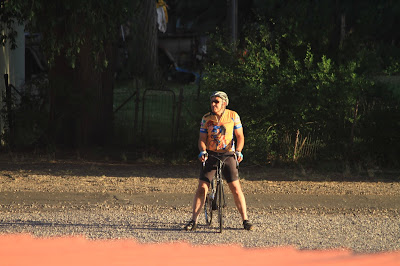 So there I was all those years later, wrestling the bike back into this beautiful little community. The slow progress gave me time to notice a small scrape on the bicycle, which resulted when a friend was teaching me more effective drafting. As he and I wheeled along at great speed, I became distracted, impacted his back wheel, and careened off the trail. My inattention netted me several abrasions and that scrape on the top tube.

Coming into town, the slight grinding of the bicycle’s gears reminded me how I often wear on the residents of this small town. A little lubricant may be in order. As I pedaled up to the trading post, I realized the old bike and I were lucky to be functioning at current levels. Neither the tires nor I had lost any air, which was a relief since the bicycle pump doesn’t perform the way it once did. All in all, things are not as bad as they could be, pandemic and all.
Posted by Tied to the Post-Twin Rocks Trading Post at 4:01 PM No comments:

The Crow Has (Finally) Landed

It’s been a long time coming, but the Crazy Crow Cafe at Twin Rocks has finally arrived. Steve has been considering a new restaurant concept for over ten years, and that plan is now a reality. Under the guidance of Frances van der Stappen, the cafe’s general manager, our new casual Four Corners comfort-food cafe started serving customers over the Memorial Day weekend. With current restrictions concerning the Covid-19 outbreak, it was the ideal time for us to scrap our old sit-down restaurant concept and do something completely new. 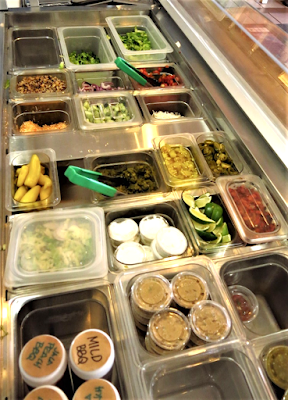 Our original plan was to open in early March, and Priscilla’s husband Luke Sagg spent much of last winter installing a quick-service, fresh-food bar, where customers can design their own meal and our staff assembles it right on the spot. Two days before the proposed opening, the town of Bluff decreed all businesses were to close and our grand opening was postponed.

There will be no indoor seating at the Crazy Crow Cafe. Food is prepared as to-go items, with ample seating spread out on the porches and between the café and trading post in an area we now call the Beer Garden. The new concept offers a surprisingly diverse set of selections, with vegan, vegetarian, and gluten-free options, as well as more traditional choices. The Crazy Crow Café is a great fast, fresh, and friendly meal, with a distinctive taste of the Southwest. It will be open 8 a.m. until 8 p.m. Monday through Saturday. 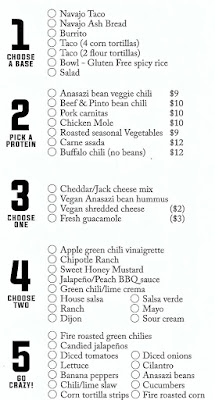 These days, safety is our first concern and all visitors are asked to wear masks. Masks and hand sanitizer will be supplied as a courtesy. Our staff promises all tables and chairs will be sanitized after each and every use; all personnel will wear protective gear and restrooms will be cleaned every hour or sooner, as needed. Food and drinks are served in environmentally friendly, single-use containers. We have made a commitment to serve local foods whenever possible. Our buffalo is supplied by the Ute Mountain Ute tribal herd; fresh organic greens from a grower in Blanding; and Blue Bird Flour and Anasazi Beans from Adobe Milling in Cortez, Colorado. 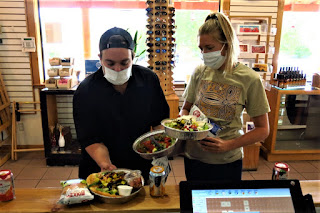 We will feature Utah craft full-strength beer, and soon hope to offer growlers or six-packs to go. Our new Beer Garden, located just behind the Sunbonnet Rock, will be shaded and a comfortable place to enjoy a drink with your meal. For dessert, a wide array of ice creams are available. We also offer our legendary Peaches de Chelly, our popular mocha brownie sundae, fresh fruit cobblers, and our famous cinnamon apple pie. Breakfast options at Crazy Crow Cafe include a variety of signature burritos, freshly baked quiche, scones, and more. Espresso and other craft coffee will be available all day long.

As we move from high-medium risk to low risk and eventually, the “new normal,” you will see more old favorites and some new items, including fish and chips, burgers, pork carnitas tacos, roasted veggie quesadilla, Bluffalo Bites, and more. We are presently creating a new Crazy Crow Cafe website that will offer online ordering.

When asked what her goals are for the new Crazy Crow Cafe, Frances sums them up very clearly. “Crazy Fast/Crazy Friendly/Crazy Fresh/Crazy Clean and Crazy Fun.” It sounds like you will have to be crazy to resist trying out our new dining options. 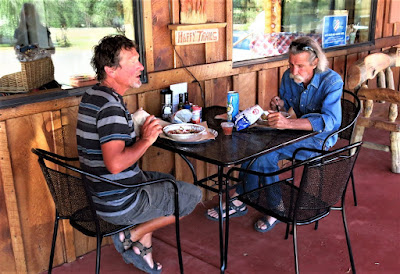 More information can also be found on our website at www.twinrockscafe.com.

Posted by Tied to the Post-Twin Rocks Trading Post at 4:02 PM No comments:

The Charm of Hummingbirds 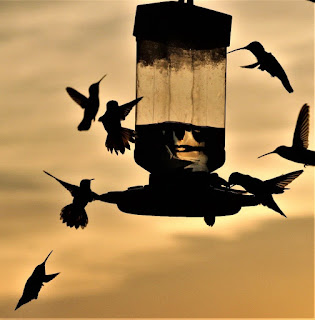 A “charm,” the collective noun used to describe a group of our tiny feathered aviators, has returned to Bluff for the season. Susie put out her first feeder in late March, and Frances filled the six stations on the Twin Rocks Café porch a week later. Ever since then, we have had a fine flock of our returning feathered friends. 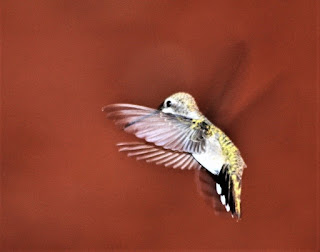 Hummingbirds stay around Bluff nearly six months to rest during their annual migration from Canada to Mexico. Folks from the Four Corners region enjoy watching them drink the nectar of budding flowers and sip the sugary liquid from feeding stations offered by local citizens. To many Native American tribes, the tiny birds have special significance, and they are viewed with great admiration and respect. 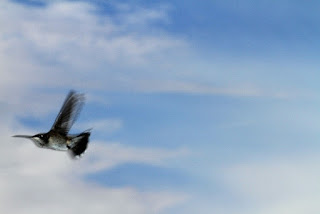 Navajo people refer to hummingbirds as da-he-tih-hi, which loosely translates to “small birds able to hover.” Hummers are considered medicine people and healers of all flying creatures. No animal on earth has the high heart rate or immense appetite of these aviators; they eat twice their body weight every day during migration season. 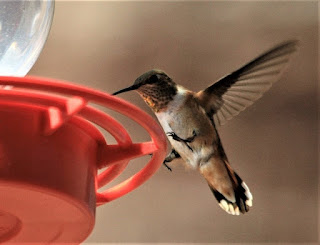 To the Zuni people, these small aeronauts are called ts’uuya and represent messengers who bring joy and beauty. Zunis believe hummingbirds intervene for humans to bring the blessings of rain to our hot, dry land. Zuni craftsmen are masters of a difficult jewelry-making technique called inlay and for decades have produced hummingbird bracelets, pendants, pins, and other adornments to honor the tiny creatures. 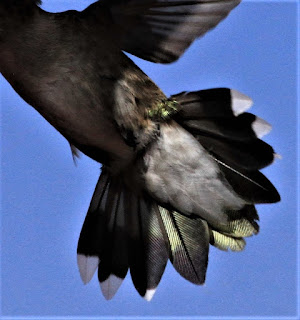 By mid-September the hummers begin to disperse, and we put away the feeders for winter. During their residency in Bluff, we routinely go through several pounds of sugar each week to keep them humming. They are the world’s smallest birds, and their total body weight typically equals not more than that of a copper penny. While the feathered flyers are away, everyone is eager to see them reappear with the coming of spring, when we will once again play host to a new Charm of Hummingbirds.

Posted by Tied to the Post-Twin Rocks Trading Post at 1:14 PM No comments: