Last Sunday I stood at the easterly entrance of Twin Rocks Cafe and watched as the sun expanded its influence over this small river valley. At the old Jones farm an east-west line of mist hung like a curtain over the field. As the sun's rays touched the frosty clouds, the fog glistened like a shimmering veil. The scene reminded me how traditional Navajo people believe there are portals to mystical, parallel worlds where sparkling, all knowing beings exist in peace and tranquility; a Navajo Shangri-La as it where. Watching this ethereal scene unfold made me wonder whether experiences like this are the origin of such legends. 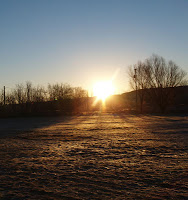 Reaching into my jacket pocket and pulling out my iPod, I set the earphones and scrolled through my play list, landing on an a capella version of Amazing Grace by LeAnn Rimes. As she lent her distinctly powerful and emotionally charged voice to Newton's timeless lyrics, I watched the sunrise enhance, then evaporate the veil; ultimately consigning it to the heavens. With thoughts of mystery and magic in my head, and LeAnn's song ringing in my ears, a considerable chill ran up and down my spine.

This time of year, the morning light on the red rock landscape is awe-inspiring. At dawn, the tufted grass on the upper benches glows golden with rosy red undertones rising from the bumpy hillocks of blow sand. Stunted and gnarled vestiges of sage and Navajo tea add a dark purple, shadowy effect to the singular scene. Looking off to the wide expanses of the four sacred directions, there are shifting degrees of light and shadow. Statuesque silhouettes manifest monuments, mesas, canyons and clefts in soft, watercolor detail.

Dropping into town through the gateway rift of Cow Canyon, I see jumbles of fallen, rough, nature hewn rock of earthy red and sunburnt white. A ragged line of bowed and buckled cottonwood trees crowned in gold escort me into our quaint little pioneer settlement. The contorted roadway discharges into a wide river valley braced on the northern and southern boundaries by towering bastions of mineral stained red rock. A semi-verdant hayfield carpets the valley on the left. To the right begins the town of Bluff herself, its cluttered groupings of varied and unique home sites spread sporadically about town. The only similarity of these dwellings and outbuildings being that they rest closely clustered under cottonwood trees that have, somehow, writhed up out of the less than fruitful earth. These much appreciated topiaries offer shade in summer, color in the fall and dramatic, skeletal effects in winter.

The town of Bluff has always been an inspiration to me on many levels. Here I realize a calm peaceful niche where old dogs and no longer young men can sit back, relax, commemorate and resuscitate, and the youth can truly live. To be born unto this place, to be labeled a Bluffoon, is considered by many to be a high honor. There are those who claim membership through association, ancestral connectivity or simply adoption. We accept all positive minded beings with open arms. The more uncommonly singular the better! The unique atmosphere and attraction of this fair hamlet is based on a cosmic connectivity and magnetic energy from iron rich rock enhanced by Bluff's good citizens.

To come and stay one must be attracted to the earth; Gaia dwells here. We embrace the dynamically crystalline night sky, uninfluenced by light or man made structures. We are moved by echo, transfixed by visions of the great expanse and absorbed by silence. Traditional Navajo people promote the Beauty Way or Pollen Path, which translate into focusing on the light and evading the darkness. They seek the way of enlightenment and so do we. Whether you find your destiny through the natural world, the world of science or somewhere in between does not matter, so long as you discover your truth and your proper place in the world. Our search has left us here.

Ella and The Great Unwashed

Not long ago Ella Toney dropped by with some of her signature stamped jewelry. Ella said she needed a little money to buy hay for her son’s livestock; he had done her a good turn and she needed to return the favor. Although we did not really need the jewelry, Barry and I agreed to buy it anyway. We are fond of Ella and realized she needed a individual economic stimulus package. After all, what’s a few hundred bucks when the federal government is spending trillions? 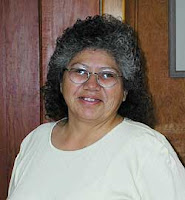 Over the years, I have developed a theory that there is a universal energy that notices and rewards good deeds. Some call it God, Barry refers to it in terms of string theory, but I think it is less complex. I believe the good energy radiates out and touches others who correspondingly respond to the positive stimulation. In any case, before we had finalized the transaction with Ella, a customer telephoned to buy a Ray Lovato turquoise necklace, validating my hypothesis.

Borrowing a page from Barry’s philosophy text, mixing in a little of my own testament and making a large round shape in the air with my index finger, I said to Ella, “You see, there is this great cosmic circle. Here’s how it works, your son does something nice for you, and you return the kindness. We buy your jewelry and somebody calls in to purchase something from us. It’s all part of the cycle. It’s . . . magic!” Looking over her shoulder and winking as she exited into the bright October sunshine, Ella said, “Steve, that’s called a blessing!” As I stood pondering Ella’s comment, a customer who reminded me of playwright Edward Bulwer-Lytton’s “The Great Unwashed” came walking in.

At Twin Rocks we often see those who have spent a lot of time in the outdoors. Some are beautifully tanned and others, having forgotten their sunscreen are red as lobsters. Most are freshly scrubbed, but a few arrive before experiencing the sublime and reinvigorating pleasure of a shower or bath. This customer fell into the latter category. He had spent so much time hiking and camping in our red rock sanctuary that his fingernails were black and his formerly straight blond hair had evolved into dreadlocks. He smelled of smoke and sage, and there was a crust of red dust on him that, despite his fair skin, made him look almost Native.

Having walked through the small museum we maintain in the back room of the trading post, he expressed interest in the Twin Rocks Modern weavings by Eleanor Yazzie and watercolor paintings by Serena Supplee we currently have on display. These are some of our favorite Navajo rugs and Serena is a perennial favorite at the trading post, so it did not take much to engage me in a spirited conversation. After only a few moments of discussion, however, the visitor quickly changed the topic. In the every day odyssey that is Twin Rocks Trading Post, that in not an unusual occurrence. Our dialogues with customers frequently take unpredictable turns, and we often wind up discussing the most unexpected and enlightening topics. In this particular instance, however, the abrupt switch took me by surprise.

As I explained how Serena had been “directed by the Great Spirit” to paint rug patterns and how Eleanor had quickly adopted these as her own, the man said, “Oh, that’s a blessing!” In short order he launched into a lecture on respecting the needs of others and how his life had been changed by learning that fundamental principle.

An hour and a half later, as my eyes were becoming droopy and I was seriously concerned I might fall over from fatigue before his discourse ended, he said, “My girlfriend recently told me I am too impulsive and insensitive. She’s right, it was a blessing; she blessed me with that information.” With that, he said goodbye and left me standing there once again.

Since our visits from Ella and the Great Unwashed, Barry, Tina and Priscilla have blessed me many times with valuable information about my personality and daily habits. After an initial bout of sensitivity, I began to consider what the Great Unwashed had said and realized he was right; blessings often come in strange and unusual ways, and there is nothing more strange and unusual than the trading post staff. As Ella would say, “Steve, that too is a blessing.”