“This is the desert after all,” I thought to myself as Grange and I sped along Highway 191 North towards Salt Lake City. He and I were heading back after his stint at home during the COVID-19 shutdown, and to get there we were traversing Utah south to north. My in-class period has long since expired, but Grange’s is just blossoming, so these days I am cheerleader, driver, financial backer, and emotional supporter; in other words, dad. 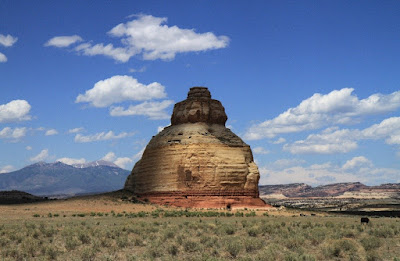 Central Utah’s undulating, split, broken, up and down, rust-colored landscape was spectacular in the early evening. Asymmetrical rock castles, fortresses, and temples emerged at every turn. Sandstone barricades pushed hundreds of feet into the air. Clouds raced across the skies, casting billowing shadows that cascaded across the land and painted an ever-changing, spectacularly visual, panorama. It was easy to see why landscape artists find this geography inspiring. This is enchanted, sacred ground.

It has been dry in this part of the country, painfully dry. Parched is a term that comes to mind. Vegetation, always in short supply along this route, is almost unknown. Winter is, however, coming. Snow will blanket the middle band of Utah before long. At that point, however, the road was smooth, dry and well-maintained, so we sailed through deep canyons and broad valleys with ease. “Like a bobsled on ice,” I thought to myself.

As we crested the summit of a large, undulating hill, off in the distance I could see a swatch of shimmering gold. “Ah ha, a cottonwood,” I advised myself. In fact, it was a grove of cottonwoods, an entire family of settlers that had found a seep or underground aquifer. Somehow, they or their ancestors had discovered the scarce resources necessary to thrive in this barren land and there they stood, majestic. 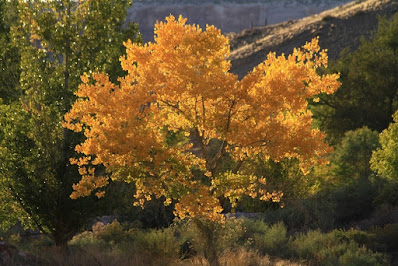 All this made me think of the Navajo, the early pioneers who settled in Bluff and of the community’s modern-day inhabitants, too. Here, in the heart of the Colorado Plateau, where cactus, yucca, and low scrubby plants predominate, these individuals also found the nutrients needed to form roots, leaf out, and raise saplings. How or why is not easy to determine. In some cases, it may have been as simple as fate, seeds deposited, a foothold gained, sunlight collected, and limbs projected. For others, the explanation is more complex, spiritual maybe, at times irrational. Whatever the reason, Bluff has grown its own grove in the center of this red-rock desert. 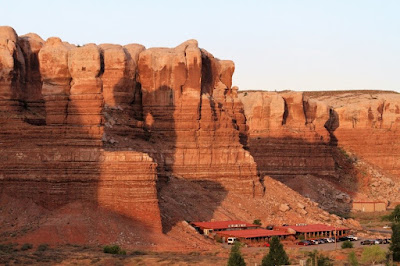 Glancing over at Grange resting peacefully in the passenger seat next to me, I felt pleased my own seedlings had sprouted and nourished themselves in this trying climate. They have now transplanted themselves into different environments, extending their feelers, and engrafting themselves onto another world. Their roots will, however, be forever grounded in the stark, natural beauty of the desert Southwest.

Posted by Tied to the Post-Twin Rocks Trading Post at 6:34 PM No comments: