My nephew Adam and I rose early Thursday morning to get a jump on the day. We were heading out to the Rez to meet "Brother John." It had been rumored that John was in possession of some top-grade turquoise, and he had agreed to meet us half way from Santa Fe to tempt us with his bounty. Unable to resist the offer, Steve and I had drawn straws to determine who would benefit from the experience. I drew the long straw and looked forward to the meeting because John has excellent taste in turquoise and is a wealth of information regarding its history and legend. Combine that with John's special, eccentric way of presenting his collections and you have the recipe for a true learning experience.

Adam was my designated driver. My family seems to be losing confidence in my ability to focus on our majestic highways and byways, so any time there may be poor lighting conditions, I am assigned a chauffeur. It is unanimously agreed that the world is a safer place with me in the passenger seat. I told Adam that he was only along to benefit from my long-standing experience in the art of wheeling and dealing and that he should not take his role too seriously. With my dignity firmly re-established, we set out on our journey.

As we drove in a southeasterly direction across the vast, rugged openness of the reservation, we witnessed a mystically potent sunrise over the head of Sleeping Ute Mountain. There were quirky, dark linear formations across the face of the fire ball, and the early morning light had an ominous blood-red glow. I half expected the old Ute to prove legend correct by rising up, shaking off the centuries of accumulated dust and debris, then proceed to introduce the modern age to the power and might of the Weeminuche band of Southern Utes.

As the sun climbed higher, the threat of monstrous mayhem faded from my mind. Adam had found his groove, and we were rocketing across Red Mesa. Canyons, mesa tops, and open plains flew by at an alarming rate. I had just put in a Celine Dion CD and cranked up the volume. I am of the opinion that this is the only way to listen to this amazing vocalist; her music must be felt as well as heard. My young driver was fearlessly putting the Toyota pickup's three-hundred horsepower, "i force," V8 power source through its paces.

He was pushing his limits on these notoriously narrow, roller-coaster roads, and it was beginning to wear down my molars. The music was moving my emotions in one direction, Adam's driving in another. I was beginning to wonder whether my fate was to become permanently ingrained in the landscape of Red Mesa. I calmly reached over, gave my nephew a solid thump on the arm, just to get his attention, and told him that I was responsible for all reckless driving in this rig and to "ease up." We continued on our journey at a slightly reduced rate of speed.

The land of the Navajo really is a place of beauty; the subtle and contrasting landscape constantly evokes wonder and strong emotional reactions in me. Having been a student of Navajo legend for some time, I find myself recreating the stories as I travel through the reservation. I visualize Johonaaei emerging from the eastern horizon with the sun shield on his back, his daily sojourn bringing him to an evening rendezvous with his mate, Changing Woman, on the edge of the Pacific Ocean. I see Talking God within a flock of small birds, and Monster Slayer repelling the backlit, knife-like flanks of Shiprock on one of his many adventures.

We arrived at our New Mexico destination and instantly spotted John. John wears strands of neon-green Damale turquoise beads, which glow as if they have been irradiated. Today, he had added vivid blue strands from the Tyrone mine to his attire. The contrast was eye catching to say the least. I nudged Adam and said, "There stands a master salesman; watch, listen, and learn, my young Jedi." John was not interested in unveiling his cache at the convenience store, so he led us up a gravel road which turned to dirt a few miles from town, and pulled his truck under a stand of juniper and pine trees. It was all very covert, which is an essential element in the disclosure. John jumped out of the pickup and scoped out the situation. Finding the set-up to his liking, he proceeded to display his treasure. I was flabbergasted by the color and variety of the stones, and knew for a fact that I was soon to be in big financial trouble here.

Before starting on this adventure, Steve and I had discussed spending restraint, and just plain common sense. We both know each other's weakness for high-grade turquoise and had agreed to go easy on buying this time. Well, when John began to open up those cases, all common sense left me. The next few hours were a blur, and I was in a state of turquoise-induced bliss. Brother John began to share his knowledge and experiences about the who, what, where, when, why, and how he had come to have such a stash. He was working his magic, and I was spellbound. 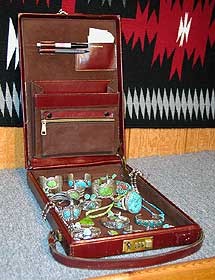 I am sure Adam learned much from this experience; probably not what I had set out to teach him, but it was a well-structured lesson none the less. As for me, I didn't recover until we wheeled up to the trading post a few hours later. We had made good time. I suspect Adam had taken advantage of my distraction and let those horses run on the way back.

Steve was standing behind the counter as I walked into the store. His first question was, "How much did you spend?" Instead of answering, I set the briefcase on the glass counter, popped the lock, and slowly opened the lid, exposing the contents. My brother-partner groaned in amazement, and his eyes began to glaze over as he admired the contents. "That's what we have been looking for," was all he said.

Posted by Tied to the Post-Twin Rocks Trading Post at 5:01 PM