After years of searching for my essential elements, I have finally realized that one thing I need in my life is texture. I am like a child who explores everything by touching it, smelling it, and occasionally even putting it in his or her mouth. At Twin Rocks Trading Post, I am constantly running my hand over rugs hanging on the walls. I close my eyes, walk down the hall leading to the back door, and let my fingers wander across the fibers, feeling pattern changes, exploring irregularities, and imagining weavers working the wool. 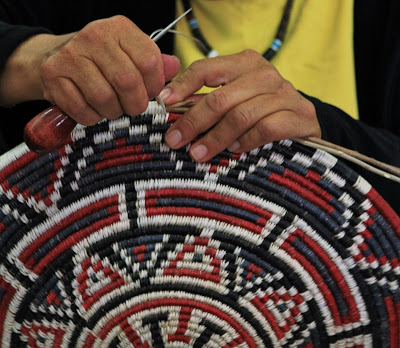 I love picking up Navajo baskets to feel the roundness of their coils and the firmness of their weave. At times, it almost seems my fingertips can decipher the pattern without help from my eyes. I visualize the basket makers out in washes harvesting sumac and imagine them preparing and dying the splits, envisioning the evolving design spiraling out from the center.

Turquoise also fascinates me. I enjoy the coolness of the stones on warm summer days. As temperatures soar, the stones remain temperate, soothing. With our cooler struggling to alleviate the heat inside the buildings, I often rub the pieces on my forehead to ease my troubles and wear away my worries.

When we lived in the home above the trading post, my son Grange often asked me to make him peanut butter and jelly sandwiches. He, like his dad, was, and still is, capable of living exclusively on peanut butter and jelly. To this day, his mother prefers the smooth variety. I, however, want texture and opt for extra crunchy. When it came to making sandwiches for Grange, I would always say, "Hey buddy, do you want the super-extra-crunchy-yummy-delicious peanut butter? Or the smooth?" You can guess his response. I was easing him into a world of texture.

One thing Barry and I most enjoy about the trading post is the fabric of its people. The art is beautiful, sometimes sublime, but what makes it really interesting is the underlying culture and its texture. When you look at a weaving and realize there are generations of tradition woven into its warp and weft, when you can feel the connection to the land in the creation, and when you see tradition in its construction, you know you are dealing with something really, totally real.

The other day, as I was mulling over a newly arrived weaving, caressing it, and wondering whether I needed to, like a child, get it into my mouth to really understand its fiber, John, an Anglo who works on the Navajo Reservation, came striding through the front doors with his Navajo husband in tow. As John and I talked about things on the reservation, the receding culture, the loss of language, the rapidly diminishing crafts, John turned toward his spouse and, with a jerk of his thumb, said, "Well, I am more Navajo than he is."

What John meant, of course, was that he believed he has a better grasp of Navajo language and traditions than his partner, a full-blooded Navajo. John felt strongly about his statement and also firmly believed it was true, even though he is not a “real" Navajo. John has spent enough time living among the Navajo, learning the language, and trying to understand the nuances of the people that he certainly knew more about Navajo history than his companion.

A few days later, one of the old-time traders called and said he wanted to bring some friends to the store. It was Sunday evening and we had closed. I could not, however, pass up the opportunity to see him, so I agreed to meet them for a visit. When they arrived, we talked about Navajo rugs and jewelry. After a while he shrugged his shoulders, gave out a deep sigh, and said, "You know, there just aren't many real, old-time traders like us left." I was flattered to be included in the pantheon of "old-time traders," and smiled broadly, but my mind jumped back to John's comment about his Navajo partner. At that point, I could not help thinking about trading post texture.

The "real" both men were referring to is a person's texture, the interwoven fiber of the individual. The strings that come together as a result of living in a certain environment many years. I could tell that John's spouse had been raised on the reservation; he had real, red sand between the soles of his feet and the pads of his sandals. He had watched Grandma herd sheep and spin wool; he was real. Navajo was in his soul, in his mind, in his heart, and pulsing through his veins. Never mind that the blood was flowing a little slower due to all that fry bread he had eaten, despite John’s commentary, it was genuine Navajo.

I was much more confused by why we had been included within the definition of old-time traders. We were not from an old-time trader family, and not that old. In fact, we are, for the most part, Johnny-come-latelies. While rolling the thought around in my mind several days, I finally decided the answer had to be . . . texture. After so many years of doing what we do, we have been woven into the trader tapestry. We might, however, be more like pound rugs, with lots of dirt ground into our weft threads to make us seem more substantial. In any case, our fibers, the very molecules of our beings, are comprised of the same material that makes up old-timers: a love of the people, a passion for the art, and a strong connection to this red land in which we live.

Posted by Tied to the Post-Twin Rocks Trading Post at 10:40 AM