As I peddled south the sun dipped below Comb Ridge and I began thinking about the trading post, finding myself laughing out loud. Realizing how ridiculous I must look, I quickly checked the road to ensure nobody had seen my fit of laughter. I worried that anyone witnessing the episode would assume I had ridden myself insane. 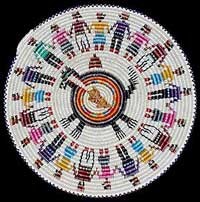 The chain of events leading to my crackup began when Lorraine Black slumped into Twin Rocks earlier that week with a basket featuring Coyote surrounded by a circle of people holding hands. I complimented her on the weaving and began measuring the size and counting the coils as a prelude to negotiation. She immediately halted my evaluation and informed me the work was incomplete; it needed a horned toad fetish sown onto Coyote's belly to finish it.

In the past, Lorraine and her sister-in-law Peggy Black have used the coyote motif in conjunction with horned toads to illustrate how Coyote attempted to relieve the toad of his clean hogan and well-kept farm. In the children's story relating to the incident, despite Coyote's persistence, Horned Toad refused to voluntarily surrender the land. After becoming frustrated with the circumstances, Coyote devoured the toad and went inside the hogan to inspect his newly acquired property. Having been swallowed whole, Horned Toad decided to pull the trickster's vital organs until he killed the thief and reclaimed his farm.

Lorraine and I unsuccessfully searched the cases for a suitable fetish. After a while, she said, "Hey wait, what's that?" I told her it was a badger fetish and wouldn't work for what she wanted. As she inspected the carving, I could see the wheels begin to turn. She was about to give birth to a new tradition.

Navajo culture tends to be somewhat fluid and this was going to be one of those times when adaptation carried the day. So, as Lorraine began sewing the carving onto the basket, she also fabricated a story to convince me Badger was an appropriate individual for the design. In the end, we had a good laugh and the tradition of Coyote eating Horned Toad became the story of Badger and the trickster.

A few days later, I was engaged in cleaning up a mess in the showroom while Barry talked to a young couple about Navajo baskets. I noticed him reach for the Badger/Horned Toad basket and begin telling the story of Horned Toad's clean hogan and nice farm. Apparently, he had not realized how tradition had migrated or how Horned Toad had become Badger. Not wanting to embarrass him in the middle of his sales pitch, I waited until later to note the change.

As I continued down the road thinking about the basket, Barry's sales pitch, and the migratory nature of Navajo culture, I was reminded of an experience I once had with mercury. I was probably 16 years old and had acquired a small amount of this fascinating liquid metal. I was enchanted by it, and after a day of sloshing it around in my hand, watching it move in beautifully fluid motion, seeing it separate into small balls, and rejoin into one large pool, I wound up on the silversmith bench at Bluff City Trading. It struck me that I needed to know what happened if I put the mercury under a flame. Since it was already liquid, I wondered what would happen when it was heated. Had I not slept through high school science, I would have already known the answer to this mystery.

Barry distracted me before I was able to fire up the torch, so I never completed my experiment. Sometime later I mentioned my project to one of our silversmiths who said I had been fortunate not to have finished the job. He informed me the mercury would have vaporized and probably found its way into my lungs, killing me almost instantly. That memory caused me to consider Navajo culture and how it moves like the mercury in shimmering, constant motion. The beauty of the liquid metal is the beauty of the Navajo culture; they are both forever moving, changing, and evolving to fit the circumstances. Fortunately, however, when properly managed, neither element is fatal. 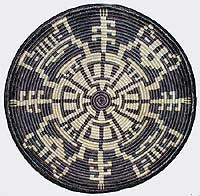 As I descended into Cow Canyon, a basket woven several years ago by Kee Bitsinnie and a story from Navajo religion by Gladys Reichard came to mind. The weaving and the story are based on a Navajo legend about the fourth world. The story is of a time when Navajo people had not been on the surface long when the they saw the sky bend down and the earth rise up until they touched. At that moment, Coyote and Badger sprang forth from the point of contact. After their creation, Coyote went to live among the earth surface people and Badger descended into the lower world. At that moment, I realized Lorraine may not have been fabricating her story, she was simply putting her own spin on a traditional tale. I could visualize Navajo culture, which like the flow of liquid metal, was perpetually dancing, changing, evolving, growing, moving forward and receding, ever-changing, shining, shimmering, and enchanting observers like me.

Posted by Tied to the Post-Twin Rocks Trading Post at 7:54 PM