Whose Story is it Anyway?

Of all the people we work with, Dennis Ross is one of our all-time favorites. Our fondness for him is not necessarily based in his artistic talents; it is mostly about the way he conducts his life. Biologically, Dennis is half Navajo and half Hopi, which makes for an interesting cultural mix. Historically, Navajo and Hopi people have been at odds with each other because of the federal government’s Navajo/Hopi land policy. 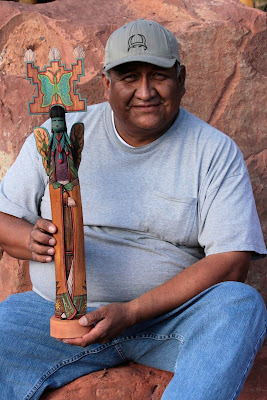 To complicate things, Dennis was raised on “placement” and is a devout Mormon. Now, you can imagine the potential ideological conflicts associated with being Navajo/Hopi/Mormon. Dennis, however, handles these apparently competing interests with miraculous aplomb. When people ask whether he feels internally conflicted, as Dennis assures me they often do, he replies that he feels no conflict whatever. I believe him, if only because I understand we are all in a similar situation. Whether it is Navajo/Hopi/Mormon or Portuguese/Irish/Indian trader, we all must balance the differences in our heritage, training, and experience.

At Twin Rocks, we are forever discussing traditional Navajo stories and legends as though we know something about them. Unfortunately, even when we are directly experiencing Native American culture, it is still in many ways second-hand. As outsiders with white faces, it is virtually impossible to appreciate the importance of these life ways and what they mean to our American Indian friends. Much of that lack of comprehension can be attributed to the fact that traditions are extremely personal. There is, however, another intangible element that compounds the problem---you just cannot fully comprehend until you have immediate, personal experience.

From time to time, Dennis carves a set of six corn people, which represents the creation of the Navajo. In the set, there is First Corn Girl, First Corn Boy, Grandmother Corn, Grandfather Corn, and two corn children. One of the corn kids features multicolored kernels carved on its body, which he calls “speckled corn.” Dennis explains that this carving celebrates the intertribal, interracial nature of today’s Native American children. 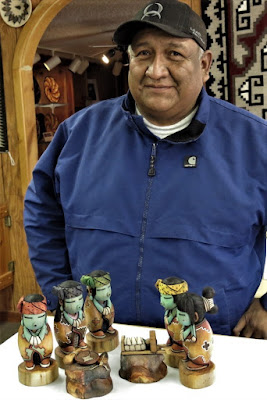 As we talked about his carvings, Dennis mentioned that he also makes corn people nativities. These nativities consist of the six original corn people carvings, along with a baby in a cradle board/manger. Being raised in the Christian tradition, I immediately felt the need to point out that there was one too many carvings in his set. “No,” he said, “there are six corn people and a baby.” “No,” I objected, “there should be one Mary, one Joseph, three wise men, and one baby Jesus, six altogether, not seven.” “Whose story is this anyway?” he wanted to know. “That’s just the point,” I replied, “It seems to me it is a Christian story and you should follow the Christian tradition.” “No, he said. “It’s a Navajo story.”

This dialogue reminded me of the time Jana took me to feast day at Acoma Pueblo. A traditional deer dance was in progress when we arrived and as it advanced the dancers entered the Pueblo’s mission church, San Esteban del Rey. Although there seemed a colossal conflict between the traditional values of the Pueblo dancers and those of the Roman Catholic church, I can remember tingling with excitement as we stood in the cathedral and watched the parade of Puebloans. To me, the dance seemed the epitome of what religion is supposed to be: acceptance of different values, love of one’s fellow man, and the celebration of life. I believed I was experiencing an exceptional combination of cultural chemistry.

Dennis reminded me that it is not about the story---it’s about the people, and we all experience tradition and culture in different, but equally beautiful ways. “Okay,” I said. “I need one of those nativities.” “See you next week with seven corn people,” Dennis said as he turned to go. I could not help smiling warmly at the man and his ability to balance the competing demands.

There is something larger at work in the land, and it transcends all of us and all of our stories.

Posted by Tied to the Post-Twin Rocks Trading Post at 6:48 PM