Jamie to the Rescue

We are rarely surprised when caravans of unusual vehicles fill the large gravel parking lot of the Twin Rocks Trading Post and Café. We have seen the grounds graced by visits of Bugattis, Lamborghinis, Austin-Martins, Ferraris, Harleys, and the occasional 6-stall horse trailer. But we have never seen anything like the parade of Mercedes-Benz SL sport cars that pulled in for lunch two weeks ago. 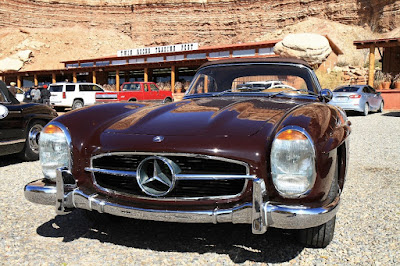 Advanced reservations had been arranged to host one hundred guests for lunch. They were part of a cavalcade of thirty-eight vintage Mercedes sports cars doing a group tour of the Southwest. Ten of those cars were the rare and precious Mercedes-Benz SL Gullwings, a futuristic auto featuring doors that swing up and out. Produced only between 1954 and 1957, less than 3,000 were built and shipped to America where they proved remarkably popular. At a price of about $6,800, the car cost three times more than the average sports car at that time. There was nothing average about these elegant autos, and their values today have soared into the 2.5 to 4 million-dollar-zone. In 1999, this model was named “sports car of the century.” 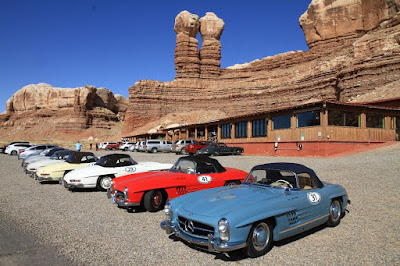 Joining the Gullwings were another twenty-eight SL Roadsters, a classic car only produced between 1957 and 1963. In total, more than $50,000,000 in autos filled the parking lot. All were immaculately detailed with beautiful leather interiors. A full spectrum of custom paint jobs were represented, and every visitor to the café came out to take photos of their particular favorite.

The group, driving a Moab-to-Moab circle of the Four Corners, stayed and enjoyed lunch for about ninety minutes. Eventually, individual drivers began to exit the parking lot on the next stage of their journey to Page, Arizona. Finally, all the classic cars had pulled away, except for one solitary vehicle which failed to start.

It is hard to imagine that any place in America is further from a Mercedes-Benz dealership or qualified mechanic than Bluff. It was pretty quickly discovered that the driver had left his headlights on for his entire visit and he had a very dead battery. After determining that nobody on the staff had jumper cables, we did what we often do when Bluff faces such a crisis.

We called Jamie Olson to help out.

In short order, Jamie arrived in his 1989 Ford F-150 pickup truck. A remarkably durable and dependable vehicle, Jamie’s truck is immaculate from the inside to the engine block, but its peeling paint job shows it is a victim of southwestern Utah’s blazing sun. 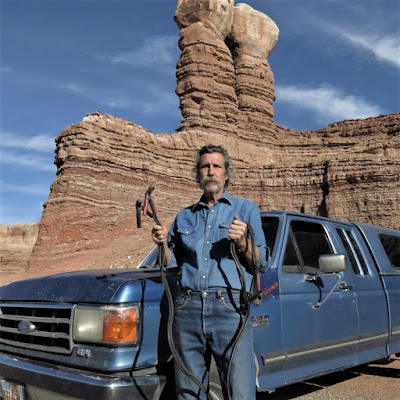 Jamie is Bluff’s jack-of-all-trades. Everyone recognizes his excellence as a jewelry artist, but he is also an accomplished concrete craftsman, carpenter, and storyteller. It is not at all unusual that when needed, Jamie is there to help.

To jump start the Mercedes, it was necessary to reach the sports car’s battery which is rather inconveniently located just behind the passenger seat. Jamie managed to reach the battery, hook up the jumper cables to his dependable old Ford truck, and jump started the engine. The greatly relieved owner thanked Jamie and sped away into the afternoon dust.

Once again, Jamie saved the day. Everyone who witnessed the scene enjoyed the incongruous image of this flashy sports car next to Jamie’s old blue truck. Just another day in the Twin Rocks parking lot.
Posted by Tied to the Post-Twin Rocks Trading Post at 11:31 AM