Last Saturday Steve took Grange to a wrestling tournament in Colorado to help fine tune his grappling skills, so I was alone in the trading post. Craig was next door managing the cafe and Priscilla was on Grandma duty at her home across the river. Aside from cleaning a mile of glass by myself, I don't mind running the store independently. Craig, Steve and I have been doing this sort of thing so many years it is second nature to us. It was late in the afternoon and, because of the extreme angle of the sun, brilliant golden sunlight streamed into the building through the large plate glass windows. It was still a bit chilly outside, so I had the front doors closed to the westerly wind. As I stood near the cash register writing an order, I heard a slapping sound on the steps just outside the Kokopelli doors. At first I thought it might be Buffy, greeting customers by whipping her tail against the wooden threshold. That good natured and mellow dog has more friends than Steve and I combined. 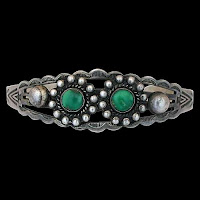 Because of the unusual sounds emanating from the opposite side of the entry, I watched the front doors closely as the left one opened and a dust cloud rolled in. I could tell there was a man there somewhere, but he was not clearly visible because of the aura of red dirt. The fellow must have been slapping his clothing in order to liberate the accumulated dirt he had somehow acquired; a generous gesture considering I would be the one cleaning up after him. The golden glow of the setting sun back-lit the character and caused me to think of an adult version of Pig-Pen, the character in Peanuts. As the dust settled, a man emerged from the haze. He was slightly over six foot tall, around fifty years of age and filthy. He was reasonably well dressed, but looked like he had just come in from the wilderness. The man smiled brightly, slipped off his Carhartt jacket and, halting by the door, turned to me and said; "I know I am dirty, but I realized you would be closing soon and wanted to pick up something for my daughter."

I waved the man in, and asked where he had acquired such a goodly amount of grime. He replied, "I have been in Grand Gulch for ten days, and it was marvelous!" As he came closer, I could see the man's bright brown eyes behind a grungy, mostly gray beard which was capped by a matted mane of brown hair also streaked with gray, but less so than his whiskers. From where I stood I could see this man had probably not bathed for the duration of his trek. As the soiled son looked through the cases, I finished my chores and discovered he was from Chicago. He was in the habit of coming to the Southwest every spring and fall to clear his mind and reconnect with the good earth. He told me that without refreshing his spirit at least twice a year he would not be able to survive his fast-paced lifestyle in the great Illinois metropolis. His dingy jeans were scuffed and torn from hiking the canyons and his khaki shirt was deeply stained and salt encrusted from heavy perspiration. The man had indeed made close contact with Mother Earth. I have to say, however, that under all that grunge the guy looked invigorated.

As we spoke, the man noticed a Fred Harvey bracelet and asked to have a closer look. I walked over, opened the case and handed him the bracelet. I had begun to explain the provenance of the piece when a pungent perfume assaulted my olfactory. I stepped back in surprise, snorted to clear my nasal passages and wiped my eyes, which had instantly begun to water. I had just caught a whiff of "ode de ten days on the trail." A powerful aroma of wood smoke, stale sweat, dirt and potent cigars hit me like an offensive overture. The guy really smelled bad! I tried to continue my presentation from afar, but the odoriferous fellow noticed my distress. I suppose the inadvertent gasp, and tears running down my face, must have given me away. The guy looked at me, laughed out loud and asked; "Do I really smell that bad?" I apologized for my reaction and said, "You definitely make an impression!" He laughed again, handed me the bracelet and said, "Okay, my daughter will love it!"

As the man departed he promised to go straight to the Desert Rose Inn and get cleaned up before dinner. I thought of calling Cindy and Amer to warn them of the redolent fellow but thought better of it, lest the gentlemen discover my disclosure. When the man drove off, I quickly opened both the front and back doors and turned on the overhead fans to purge his perfume from the building. It took awhile, but I finally felt comfortable that I had accomplished the task. I turned the open sign to closed, shut and locked the doors and headed home for the evening. On my drive north I contemplated the unusual people we so often meet in this business. Many of them come to this country to connect with the natural world. Bluff City and the surrounding countryside seems to call to those in need of solace and reflection; a portal to Gaia can be found here. As I pulled into the driveway of our home, I wondered if my close encounter with Wildernessman had left his essence on my being. Laurie has an extremely sensitive sense of smell, so if I wasn't careful I would be eating dinner on the back porch with her nasty cats.

Posted by Tied to the Post-Twin Rocks Trading Post at 3:48 PM