Owls have always fascinated me. For one involved in trading with the Navajo people, this may seem a serious handicap. That, however, has not been the case. In fact, in spite of their notoriety as harbingers of death and representatives of the dark side, owls seem to have a relatively good reputation among the Navajo. 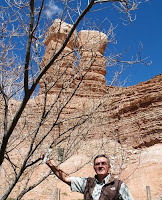 One of my favorite Navajo legends tells of a time when day and night animals played a shoe game to determine whether it would be all day or all night. The day animals had Coyote as their leader, and the night animals elected Owl to head their team. Many believed the contest should result in a tie, because if either side won there would be no balance, the world would be all light or all dark.

For a long time the game surged back and forth, with no apparent winner. At one point, however, the tide turned in favor of the night contestants and some began to suspect Owl was cheating. Red Bird finally revealed Owl’s deception and all agreed that from that point forward the earth would be half day and half night.

Priscilla has explained that owls are actually viewed as intermediaries. Instead of being bad luck as many in Western culture have been taught, they act as a warning to a person in danger. When Owl appears, Navajo people believe you should bless him with corn pollen. In doing so, you ward off troubling times and protect yourself from harm.

Many years ago I was traveling home from an evening in Blanding when I saw a flash and heard a muffled thump. Immediately pulling over to see what I had hit, I noticed a small lump in the road and feathers scattered about. As I approached the mass, it became apparent I had struck an owl as it swooped down to capture a mouse that had been illuminated by the headlights. Wrapping the bird, which still held the mouse in its death grip, in an old jacket and placing the two in the back seat of my car, I continued on my journey.

The following day I dug a large hole behind the trading post and planted the owl and mouse along with a mimosa tree I had recently purchased. Over the years the trio blossomed into a beautiful planting which frequently reminds me of the magnificent bird and the cultural stories associated with it. Once in a while I imagine the owl hooting at me from beneath the cliffs. As its voice echoes across the rocks, I am reminded of the bird and its importance in Navajo tradition.

Probably because of my interest in this avian species, of the countless items brought into the trading post over the past 20 years, one of my favorites is a talisman commonly referred to as a bugaboo owl. According to Jana’s book, Navajo Ceremonial Baskets - Sacred Symbols Sacred Space, local basket weavers often make these good luck charms as a means of ensuring proper utilization of leftover basketry materials. These “protection devices” are generally hung in the corners of a building to ward off evil spirits. Although four are recommended, two or even one will work. As legendary medicine man June Black horse once explained, “It’s a little bit like insurance; the more you have, the better off you are.”

Realizing these charms might have a positive effect on sales, years ago we hung one over the cash register and spread several throughout the trading post. Since we have remained solvent, it seems to have worked. Through the years, however, our owl population has decreased as we distributed them to people who seemed in need of a little luck.

Based upon the success of the mimosa tree and our cash register experiment, as the economy worsened in 2008 and 2009, Barry and I decided on an innovative strategy; we planted one of our last bugaboo owls with a cottonwood sapling to see if they might sprout into a money tree. So far the seedling has only grown a few singles, but we are hopeful it will soon begin producing larger denominations.

With Warm Regards,
Steve, Barry and the Team.
Posted by Tied to the Post-Twin Rocks Trading Post at 1:38 PM