Rebels Without Any Shoes

On a recent trip to Salt Lake City, I was held up in a road construction zone while the big machinery rumbled past, scratching and compacting the earth. As I sat in the car waiting for the flagger to release me, out of the corner of my eye I noticed a large, unmolested patch of tall grass waving gently in the late afternoon breeze. The soft light made the stalks shimmer in alternating shades of deep green and pastel lavender. The scene reminded me of a summer day in the mid-1960s; a time when Barry and I had fallen into the rebel mode and were rapidly becoming an unbearable thorn in our mother’s side. 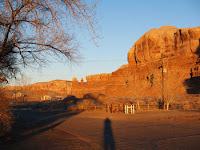 The rocks in Bluff, Utah.

That year the desert around Bluff had seen an unusually generous amount of moisture, so vegetation was abundant. Patches of weeds and clumps of grass sprouted everywhere. As a result of the plentiful rain, the goatheads were also thriving. For most children those pernicious stickers posed a significant problem; not for Barry and me.

Since money was tight, after school let out for the summer Barry and I jettisoned our shoes and went about barefoot. It did not matter that the gravel was sharp and the goatheads sharper, the soles of our feet were like leather and not much penetrated the thick calluses we had developed.

On that particularly memorable day, the morning began innocently enough. Barry and I got up early and went down to the wash to begin our planned earthworks. The sand was soft and easy to excavate, so, without giving any thought to the possibility of a cave-in, we dug holes into the bank to use as a fort. When the neighbor kids arrived and interrupted our engineering, a clod fight ensued.

As anyone raised in a rural environment knows, dirt clods are an effective means of defending yourself without much risk of permanent damage to the belligerents. Since Barry and I were not blessed with great pitching arms, it soon became apparent that we would get the worst of it. So, abandoning our fortifications to the enemy, we retreated into the interior of town.

A few minutes later we wound up at the Twin Rocks Store, which at that time was a cross between a bar and a small market. At the Twin Rocks, you could whet your whistle and get milk for the babies; all in the same transaction. As usual, there was an assortment of people waiting outside to do their business. As was also customary, though it was still before noon, a few had already imbibed.

With our egos bruised from the recent drubbing, Barry and I decided to redeem ourselves by educating these wayward individuals to the dangers of intemperance. When a Navajo couple became fed up with our sermon, a large lady grabbed Barry and, turquoise jewelry clanking, threw him in the back of a waiting pickup truck. I can still see the woman in her velveteen blouse with coin buttons, turquoise bracelets and squash blossom necklace holding Barry tightly as they drove away. On his face was an extremely sad expression that told me he was resigned to his fate. I was sure we would never see each other again.

Since television had recently come to the Simpson household, I had learned a lot about indigenous cultures. “Cannibals” I thought as my mind flashed an image of Barry sitting in a large, boiling caldron. “How am I ever going to explain this to Mom,” I remember thinking. Resolving that I could wait until dinner to inform Rose of her loss, I struck out for the wash. Maybe I could offer a truce and get back to my excavations. “It is always better to stay busy in difficult times,” I assured myself.

A minute later I noticed the pickup truck begin to slow. When it had come to a full stop, the Navajo abductors rolled Barry out of the truck and into the soft dust. By the time I arrived on the scene, Barry had brushed himself off. “That was close,” he said. “Yes,” I responded, relieved that I would not have to tell Mom that her son had been stewed into bones and broth. “Better keep our lectures to ourselves,” Barry suggested as we hotfooted it down the graded dirt road towards home.

And that is how the Rebels Without Any Shoes learned that it is better to give than to recite.