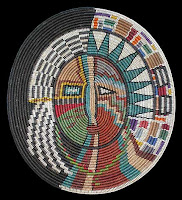 Last evening, I arrived home to a glorious sunset. As I pulled into the driveway, an orangy red glow radiated about the town. The streets and spaces between buildings visible from the west were ablaze with a fiery glow, while those running perpendicular to the light rested in murky shadow. Laurie and the girls were not due home from Monticello until later that evening, so I had a little time to kill. I grabbed a light jacket from the house, snatched a big white plastic lounge chair from near the carport and took a seat on the lawn to enjoy the autumn sunset.

The sun sank lower on the horizon behind me, and the skyline took on that blue/black/purple hue unique to this time of year. Main street was relatively quiet, the air crisp, clean. . . invigorating. The maple trees in front of the house were decked out in leafy halos of red, orange, yellow and brown. Dispersed light set the foliage on fire as the great, luminescent orb settled in for the night.

As I sat back and mentally relived the day at Twin Rocks, I shivered in the cold fall air. A question posed by an agitated e-mailer weighed heavily on my mind. I had received the note entitled, "A much needed correction", just before leaving for home. In the message, the sender strongly questioned the integrity of Elsie Holiday's interpretation of Changing Woman. The tone of the dissenting message disturbed me, and cast a shadow of negativity on a near-perfect day.

In a video we produced, Elsie described the deity she portrayed in her latest weaving, and gave her personal view of Changing Woman and what she stands for. The e-mailer was adamantly opposed to Elsie's version of the cultural icon, and said in part, "Being Navajo myself and growing up with these stories I am offended that someone could make something so beautiful and not know the meaning behind it."

Steve and I have spoken extensively with Elsie about her culture. Elsie was raised traditionally, and her father is a recognized medicine man. She often consults him before weaving such iconic images into her baskets. At times, Elsie seems embarrassed by what she apparently perceives as her poor language skills. In my opinion, however, there is no one more eloquent when it comes to presenting a mythological story through art. 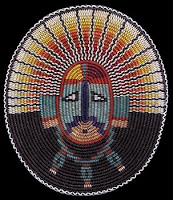 Elsie's critic went on to say, "I admit there are many versions of the story but I have never heard one of Changing Woman being spiritually or physically female AND male. PLEASE CORRECT ME IF I AM WRONG!" As I sat there in the deepening twilight, I contemplated an adequate response.

As I understand it, the bedrock of Navajo mythology is attempting to discover a balance in one's life, and trying to hold onto it as one grows and develops. I think the key is, "as one grows and develops." I have read a number of books on Navajo myth and legend, but do not claim to fully understand it or have the personal perspective of a Native. What I have come to realize, however, is that even the recognized experts have differing opinions when interpreting Navajo mythology. And when it comes to individual beliefs, . . . well let me just say, "Katie bar the door!"

Experience has taught me that criticizing the cultural interpretations of others is detrimental to my own basic education. Anyone who intently studies a subject and honestly contemplates the possibilities will generally have something interesting to say about the topic. Many of the artists I have spoken with have given me thought-provoking and throughly stimulating interpretations of their traditional stories.

I do not feel that legends were meant to be translated literally. Instead, I believe they were intended to teach through metaphor. The intent or meaning of the story is contained within, but must be lived and practiced to be totally understood. Education and contemplation are a journey of understanding; a quest for knowledge. If they are approached with honor and respect, there really is no wrong answer, just different levels of understanding.

I have learned that artists such as Elsie have a special talent; through their creativity they have the ability to motivate. These incredibly creative individuals bring hope for the future of Navajo culture. They create not only to make a living, but to inspire. Open your mind and discover the mystery of an age-old culture that has relevance even in today's world of science and technology.

In the darkness I sat there thinking, listening and feeling, while Laurie's feral cat population rustled the nearby bushes. The more friendly of the pride tugged at my shoe laces. Then, out of nowhere, came a distinctly pungent odor in the chilly night air; a skunk was afoot. I stood up and moved cautiously towards the house, having no desire to meet Mr. Pole Cat up close and personal. It seems there is always someone or something causing a stink and fouling an idyllic situation.