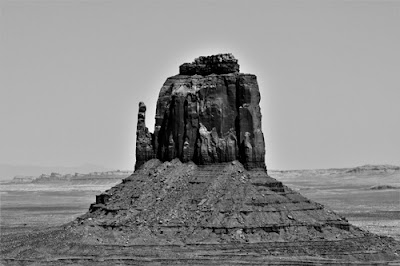 Back in the 1950s, when I was a kid growing up in Louisville, Kentucky, just about my favorite thing was to spend Saturdays at the West End Theater double-feature matinee. For 40 cents, I could see two westerns and enjoy a small box of popcorn and a soft drink. I caught a free ride on any city bus, since my Dad was a driver and everyone knew me.

For me, the very best movies were when John Wayne and the U.S. Calvary raced around chasing Apaches in a wondrous place. I learned was called Monument Valley. I didn’t know where this place was, or even if it was real, not a movie set, but I dreamed of going to this mystical landscape. As later movies were released, I discovered the fantasyland actually existed in living color and not just on black and white film. This was the place in the world I most wanted to see. It turns out that a great many people feel same about Monument Valley. 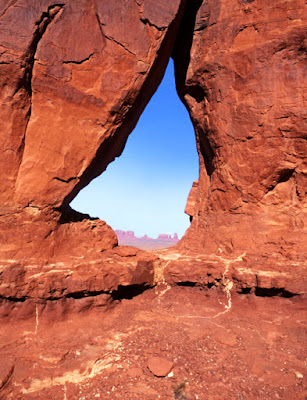 Today, Monument Valley is a Navajo Nation Tribal Park, one of their public attractions shut down since March due to the Covid-19 virus. Stradling the Utah and Arizona border, the park lies just 45 miles south of our home at Twin Rocks. This location is one of the major attractions for tourists, both foreign and domestic, traveling through the Four Corners region. It has not always been so. The area was virtually unknown until an intrepid couple, Harry and Mike (Leona) Gouldings, set up their original trading post in a tent during the 1920s.

At the depth of the Great Depression, the Gouldings realized they and their Navajo neighbors were destined to a life of poverty unless they did something to secure their collective futures. Harry Goulding had a set of beautiful photos taken of the area and decided, like so many of his generation, to follow his dreams. He headed for Hollywood, determined to get his foot in the door of the movie business. 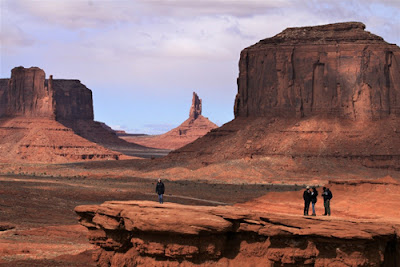 The Gouldings took what little money they had, packed food and bed rolls and drove to Los Angeles, where they camped out in the office of the great American film director John Ford. It was 1939, Ford was considered the top director in the film industry and he loved making Westerns, which at that time were largely shot on sound stages or in undeveloped areas around southern California. For three days, the determined Gouldings sat in Ford’s outer office and waited for a chance to talk to the director, an ambition Ford’s staff rebuffed each day.

Finally, John Ford stormed out of his office and asked what these two characters, who were eating their sandwiches in his lobby, wanted. Harry Goulding told him he wanted to show him some photos of a location for his next movie. At that moment, John Ford found his stunning signature visual backdrop, and developed friends for life with the Gouldings and the Navajo people of Monument Valley. Three months later, production started on a film called Stagecoach, and the rest is cinematic history. It marked the beginning of a new era of American films shot on location, and brought much needed prosperity for southern San Juan County, Utah. One of the most stunning and visited sites in the valley is named John Ford Point. 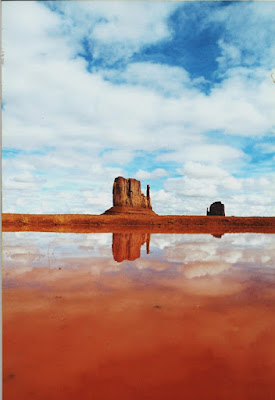 Stagecoach was only the first of the great Westerns John Ford made in Monument Valley. He would conclude nine more films there, and the location became the most iconic landscape in America. In addition to serving as locations for hundreds of movies, it has also provided the backdrop for everything from Japanese whisky to German motor cars ads (and remember the Marlboro Man?) The economic impact of film-making in San Juan County has been tremendous. Harry and Mike Goulding built a substantial two-story trading post that appears in many Ford movies. As the film makers continued to come, they added cabins, rooms, and food services.

The movies also brought much needed employment for a great many local Navajo people. In a succession of movies, Navajo actors appeared as Cheyennes, Comanches, Apaches, and occasionally, Navajo scouts. They also got a great deal of work building sets, hauling freight in their wagons, and assisting in feeding and caring for the large groups of Hollywood professionals, livestock, and movie stars. 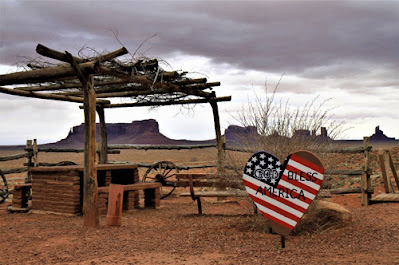 Goulding’s Lodge is now an extensive hospitality site serving the traveling public through their large motel complex, cabins, restaurant, swimming pool, arts and crafts gallery, and museum. It is the destination of choice for people worldwide. Last summer, when we were still getting foreign visitors at Twin Rocks, I talked to a mature man with a decidedly Down-Under accent. He told me he had just spent three days in Monument Valley and that it had always been the dream of his life to visit this special place. When I asked how long it took to come from his home in New Zealand to Monument Valley, he told me that he had logged 27 hours on an airplane and it was worth every minute. 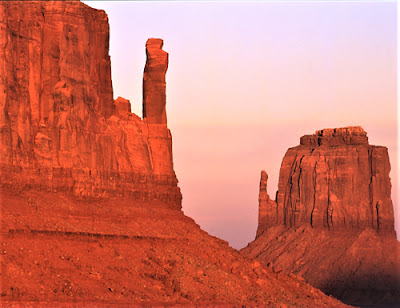 Today, I live just forty minutes north of Monument Valley, and I confess I don’t get there often enough. Before Susie and I moved to Cortez in 1990, we had already spent all our vacations, and most of our disposable cash, exploring the Southwest. We loved the Four Corners region and spent many hours waiting for the sun to either rise or set for the right photo. Since visitation to Monument Valley Navajo Tribal Park has been closed these last five months, I have missed my occasional drive down the road to see the place after a rare rainfall, when the fog has settled, or when friends come to visit.

I guess one of the few positive things about these last terrible months of doubt and confusion, is that it has made a lot of us resolve to stop taking things for granted. As soon as it reopens, I plan to be one of the first visitors back in Monument Valley.

Posted by Tied to the Post-Twin Rocks Trading Post at 2:59 PM