Recently one of our loyal readers asked Rick how “Tied to the Post” got its name. Rick had never actually considered the question, so he did not have an adequate response. As Napoleon Bonaparte suggested, “History is the version of past events that people decide to agree upon.” At Twin Rocks Trading Post, there is rarely agreement on anything, let alone our history. In hopes of addressing the issue with a sense of credibility, I went back into the trading post archives to find the answer. The story set out below was first published in 2003. So, true or not, it has obtained the patina of age, which lends it some credence. This is what I found:

Barry and I have often mentioned in our weekly mailings what an interesting and enjoyable childhood we had growing up in Bluff. The other day we were discussing (maybe debating is a better term) how certain things occurred. As you might guess, we do not always remember our history exactly the same. 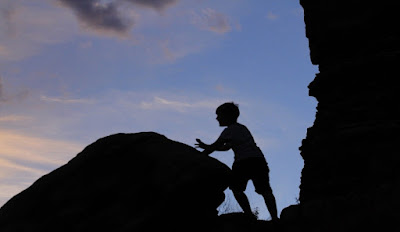 One particular conversation centered on our long-time friends, Perry and Ray Johnson. These brothers also grew up in Bluff, and despite our many childhood scuffles, we have remained friendly over the years.
During our youth, Momma Rose, our mother, typically referred to us as “hellions.” Rose understood that without a change of course we were destined for eternal damnation. Notwithstanding Rose’s forecast at the time, our offenses were typically of the misdemeanor variety. Half-naked, we circumnavigated Bluff, scaled sandstone cliffs, and terrorized our neighbors. Since we never wore shoes, our feet developed large callouses that were impervious to the gravel streets and goat-head stickers prevalent in town. We were as dark skinned as most Native children, partly because of our tans, partly because of our Portuguese heritage, and mostly because baths occurred only once a week in the Simpson household. We were frequently mislabeled Navajo, and that pleased us greatly. 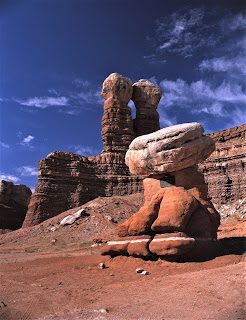 On the particular occasion in question, we were engaged in a running battle with Perry and Ray. They are older and had better throwing arms, so they had the upper hand. Notwithstanding their age advantage, we held our own. Since none of us had any future in the Major Leagues, there were not many direct hits and no serious injuries. When Perry and Ray had had quite enough, they simply rounded us up, tied us to a fence post, and walked away. A while later Rose wandered by, noticed our predicament, and, after an obviously difficult internal struggle over the advisability of setting us free, released us back onto the streets.

The discussion about Perry and Ray led Barry and me to conclude that our time at Twin Rocks was like being “tied to the post.” Because there was a historical connection, we decided “Tied to The Post” would be a fine name for our weekly stories. And so, it became.

Barry and I readily agree that the things keeping us tied to this location are many and varied; the people are great; the geology is starkly beautiful; the history is extremely interesting; and the business is, well, adequate. The primary element that stands out in my mind, however, is the light. Sunlight on the cliffs does magical things to this river valley, and to me personally.

After several years back in Bluff, I decided fall is my favorite season. In September and October, the light is so pure things absolutely shimmer. The trees sparkle in the breeze, and you can almost feel their movement. Later in the year, they lose their leaves and, when the sun goes down, they look like those paintings we all did in primary school, the ones where you put a blob of ink on a page and blow it with a straw to make the ink run. 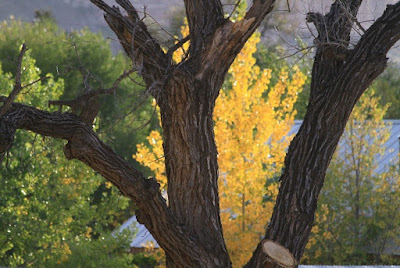 In October the trees have that barren feel and when the sun has just sunk below the horizon, are backlit with residual light. It is a strange and beautiful sight, almost Halloweenish. In the mornings and early evenings, the cliffs glow as though someone built a fire under them. The pink and red hues of the sandstone beam. I often think Bluff must now be as Santa Fe and Taos were in the early days.

During my first months at the trading post, I used to close the store and sit on the porch watching the sunset. Frequently, people would stop to talk. On many occasions, the conversation halted after a while, and I would notice the visitors looking around as though they were searching for something. They would then ask, “What is it?” At first, the question baffled me, but after a while I decided they were actually feeling what someone later described as the “magic of Bluff.” It's hard to put your finger on it, but I finally decided it is a combination of the smart and creative people who live in and around our community, the stunning scenery, the peaceful solitude, the bone-dry climate, the clear and starry nights, and the crystalline illumination. Maybe it is also Bluff's history, which at times is almost palpable. And that is what keeps us tied to this post and how our stories got their name.

Posted by Tied to the Post-Twin Rocks Trading Post at 10:48 AM