Years ago, I found myself in the parking lot of a Chinle, Arizona, fast-food joint waiting for Jana to return with her bagful of guaranteed heartburn. Kira and Grange sat in the back seat, anxiously anticipating their share of the spoils from Jana’s culinary expedition. The reservation dogs circled, and I couldn’t help notice how well fed they appeared. I had seen countless Navajo Nation canines, and none had ever looked as perky and portly as that group. They trotted around the parking lot with their tails sticking straight in the air, as though they were masters of this red-earth universe: no skinny, slinking dogs that day

After about ten minutes of watching the cocky canines, I saw yet another pair coming my way. As they approached the car, I noticed the larger dog had a great wad of chewing gum stuck to his left buttock. Completely oblivious to the sticky mess on his backside, he proceeded to search the grassy area near the highway for choice morsels, while his buddy did the same. 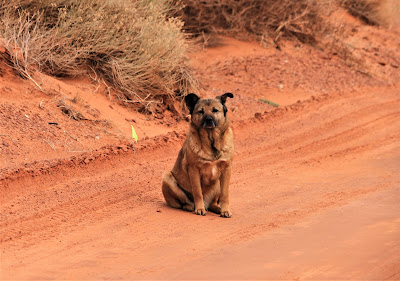 I began thinking there had to be a children's story in that situation, so I took up my legal pad and started scratching notes: "Don Coyote, son of Diablo Domingo from Red Pop Ranch, Arizona, and Bonita Rosa, from just over the hill at Funny Farm, New Mexico . . . . It was a union of convenience that produced this wily reservation pup. Half coyote and half Andalusian Hound, he had given himself the title "Don," indicating a nobleman of Spanish descent, to ensure his acquaintances acknowledged his patrician origins . . . . Nacho Sanchez, his trusty sidekick, an undocumented alien from the southern region of Mexico . . . Rebecca Rabbitat, environmental engineer, Don's sweetheart from Hubbell Trading Post." You get the picture.

Kira finally noticed I was feverishly writing (probably because my pen had run out of ink, and I had confiscated her sketch pencil in an effort to continue the creative process) and asked, "What are you doing!?" I replied that I was jotting down ideas for a children's book and asked, "Do you want to hear them?" "No," she replied, completely uninterested. At that moment, my creativity flagged and I was left to contemplate the dusty reservation town outside my windshield. It began to dawn on me exactly how much the people, and animals, of this red land had become incorporated into my consciousness. The thought took me back to a time when I was young.

After a few years of living in northern California with Rose’s parents, Duke decided it was time to bring the herd back to the land of their roots. When we returned to Utah, we lived in a tidy white house next to Blanding Elementary School. Located on the same parcel of land was a new mobile home (trailer) owned by my paternal grandfather, Woodrow Wilson Simpson, and my step-grandmother, Fern Powell Black Simpson. "Woody," as he was known, had a name of familiar origin. Although he was not overly presidential, he always had a drawer full of toys for us to play with when we visited, and a head full of funny songs which he related while he bumped us up and down on his knee. Songs that went like this: "Then comes Noah stumblin' in the dark, tryin' ta find a hammer just to build himself an ark. Then come the animals two by two, the hippopotamus, the kick kangaroo. Then comes the lion, then comes the bar, then comes the elephant without any har."

Shortly after we moved into the white house, Woody's mobile home caught fire. After the insurance adjuster finished his evaluation, we purchased the trailer, renovated it, and moved it to the east side of town. It was placed behind what was then the Plateau filling station, and we commenced our new lives at that location. Since the trailer had only two bedrooms, Craig, Barry, and I slept in sleeping bags on the living room floor until a second trailer was secured as our exclusive sleeping accommodations.

I often thought of these arrangements during the Paula Jones/Bill Clinton affair and the impeachment hearings associated with President Clinton. Recent events have reminded me of that particular time. Back then I closely identified with Paula Jones, since we both had been raised in a single-wide and were both also associated with presidents; she with Bill and I with Woodrow Wilson Simpson. I often, much to my wife's chagrin, proclaimed that Paula and I were kindred souls since we are both "trailer trash." For me, it became a badge of honor. Paula may not have agreed.

While I sat watching animals meander around Chinle, thinking about my childhood and how the Navajo people had fully incorporated themselves into my life, I remembered an oak display cabinet we had during our trailer tenure. When Blue Mountain Trading Post was constructed in 1976, that display case became incorporated into the built-in cabinetry and has remained there ever since. It made me consider how the people of Twin Rocks have become as indispensable to me as that display is to Blue Mountain Trading Post; remove it/them and what you have left is a large void.

By the time I started my journey home from Chinle that day, it was twilight. Kira, Jana, and Grange had proceeded south to Tucson, and I was left alone with my thoughts. As I sped along the narrow reservation road, shadows played on the barren land, and I was struck with its stark beauty. Sloped mesas and jagged spires jutted into the sky. As the sun set, the lights of the reservation glowed like mica stars placed into the firmament by First Man and Coyote, the trickster. I was once again reminded of a prior time.

The first time I flew into Los Angeles at night I was startled by the symmetry and number of lights on the ground. The reservation has none of that uniformity or numerosity. The lights are few and scattered: a small camp here, a cluster of buildings there. Most reservation towns contain far fewer people than one Los Angeles city block, and the dwellings are scattered helter-skelter about the landscape. It could be that confusion which attracts me.