Priscilla and the Apple

Earlier today I was talking with Priscilla Sagg about something that happened a while back. The incident was extremely funny, but will not be directly related in this story because we don't want to hurt anyone's feelings. Since she has been at Twin Rocks Trading Post with me since we opened the doors in the fall of 1989, Priscilla is my Number One Employee and Number One Buddy. We go all the way back to when she and I would open the doors in the morning, clean the showcases, vacuum the floor, and wait the rest of the day for customers who never arrived. Anyway, as a result of the story I told her, she reciprocated with an interesting tale of her own. She said she had been visiting with some tourists who very nicely gave her an apple. After she finished eating it, they asked whether she had ever had one before. Once we all stopped laughing, I began to realize just how complicated the question really was. 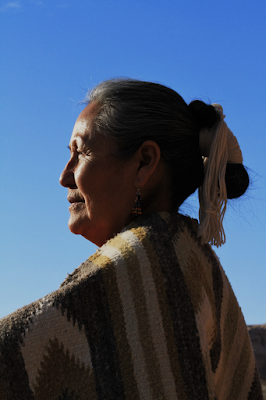 The apple-givers obviously assumed a certain lack of availability and a certain lack of development this far out of the mainstream. That really was not such a bad assumption. I have often thought Bluff is located at a cultural crossroad and a cultural divide. I have also concluded it lags approximately 50 years behind the rest of the world. The town is situated just two miles north of the northern boundary of the Navajo Reservation and although it is a small town of approximately 250 people, it has most of the modern conveniences. Just south of the San Juan River, however, many Navajo people still live without the necessities. Some have to haul their water in tanks carried in their pickup trucks or on trailers. They do not have access to electrical lines, so power is obtained by portable generators or batteries. Recently, in relative terms, cell phones have compensated for the lack of telephone lines. I have seen pickup trucks parked close to the window of a home with a cord running in to the television set. The outside culture is being piped directly to the inhabitants through means of a truck battery.

Years ago, Damian Jim worked at Twin Rocks. Damian is a talented artist, graphic designer, and computer technician. After working at the trading post all day maintaining our web site, keeping our computers alive, and doing a variety of other highly technical activities Barry and I couldn't even begin to comprehend, he would go home to his one-room house that did not have water, electricity, or telephone. I often marveled at him carrying his laptop computer out the door, since it was completely incompatible with where he was going, or so I thought. I ultimately came to realize that Damian had been successful in neatly fitting his two worlds together. It is amazing what can be accomplished with a fully charged battery and a gas light. The culture that referred to computers as "the talking metal" was being revolutionized by Damian's generation.

It is these dichotomies that make being at Twin Rocks so interesting. We get to see what remains of a rapidly changing Native American culture on an everyday basis. We also see how that change is impacting the people and how the outside world views this evolution. Questions as simple as, "Do Navajo people sing?" and "Where do we find real Indians?" show deep interest and a compassion for the people, along with a great lack of understanding. The trading post is frequently the interface between the people who want to understand Navajo culture and Navajo people themselves. In a sense, we are a broker of information, a learning institution. Information passes both ways through the post, and we are able to experience both sides of the equation. Barry and I have a window on the events affecting local Navajo people, and it is an interesting position from which to view the progress.

Posted by Tied to the Post-Twin Rocks Trading Post at 3:06 PM