When Barry and I were young, the Simpson family operated a small filling station on the south side of Blanding, Utah. This was our first venture into family business, and we have been working together, off and on, ever since. Duke began leasing the small Plateau service station when we were 10 and 9, respectively. During summer vacations, we maintained a rotating schedule with Craig, our older brother, consisting of a morning shift the first day, an afternoon shift on the second day, and play on the third. Since this was before self-service, we pumped gas, repaired tires, checked oil, sold snacks, and did all the other things associated with small filling stations.

Duke was always good about showing us techniques to make the operation better. Since we were young, we were mostly interested in drinking soda pop, eating potato chips, and just making it through the shift. Duke ran a tight ship, so he was always after us to walk out in the parking lot and pick up the trash deposited there the night before. Earlier today, as I walked back to the trading post with lunch in my hands, I noticed a potato chip package in the Twin Rocks parking lot. Since my hands were full, I couldn’t get out to pick it up, which started me thinking about how we have gotten so busy around here that we don’t always get to things as quickly as we should.

Consequently, I realized there is a wrapper in my emotional parking lot I have been meaning to retrieve. Picking it up requires writing this article. The bit of unfinished business originated when I was asked to write a short essay for a book friends of ours were writing. Since Barry was out of town, I became solely responsible for writing a piece focusing on modern-day trading posts. In doing so, I mentioned several traders I felt had made significant contributions to contemporary Navajo weaving.

One of our friends read the draft and called to inquire what criteria I had used to determine the traders I included. She obviously believed I had a given a lot more thought to the issue than I had. Her point was, “How do you define an Indian trader?” As usual, she had put her finger on a difficult issue. In the past, an “Indian trader” was one who operated a trading post on a reservation, who traded with “Indians,” and who held a federal Indian trader’s license. Using that definition, Barry and I certainly are not classic traders. Her idea of an Indian trader reflected on the relationship between the traders and the “tradees,” and discounted the day-to-day operations of the establishment. She felt strongly it was the relationship between the people that determines whether you are, or are not, a true trader.

During our discussions, it became apparent the trader connection she felt was so important frequently manifested itself in the form of bad financial decisions, which were often good personal choices. Such decisions are typically the type that make you question your sanity, but make you feel good when they turn out. Typically, we justify them even when they don’t go right by saying, “Oh well, we were destined do it.”

Jana, my wife, frequently reminds me we are never going to get rich making so many of those “oh well” decisions. Maybe we all have to realize we are never going to be wealthy anyway, and that the “oh wells” are what keep us smiling. One “oh well” incident I frequently laugh, and cringe, about involves Navajo folk carver Rena Juan. Many years ago, Rena and her now former husband, Harrison, came into the store with several sculptures. It was almost Christmas and Rena was looking for a present. She had her eye on a peyote rattle. The piece was nicely done and had won a blue ribbon at the Gallup Intertribal Ceremonials. Since I was feeling flush at the moment (I am particularly careless when business has been good and there is a little cash in my pocket), and since Rena and Harrison had been good to me, I told her I would just give her the rattle. She objected and offered to carve a small portrait of me in return. After telling her I did not want a carving of me and listening to her insist, I finally gave in. 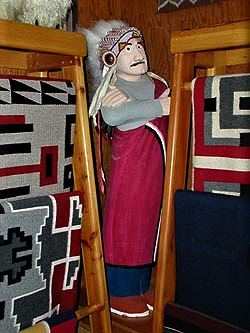 Afterwards, every few months Rena would stop by Twin Rocks and insist I allow her to photograph me for the carving. Over several months, she gathered pictures of me from virtually every angle. I often stated I did not want the carving, but she persisted. About 20 photographs later, I began to press her to just get the project done; I couldn’t bear up to the photo sessions forever. Months later she stopped in with a large carving. I had to admit it was a funny piece, but I was expecting a small carving and this was about four feet tall. Since I was still a little naive in the ways of trading, I thought she had gone out of her way to compensate me for Harrison’s gift. No, that was not the point; she wanted $800.00 for the carving. I informed her I would not pay, that it was supposed to be a gift and she would have to take it to one of the other trading posts. Certainly, the other traders would pay handsomely for a carving of me! Rena, realizing I had her over a barrel, decided a serious discount was in order. At that point, I said, “Oh well,” and wrote the check. It certainly made Barry, Priscilla, and everybody else around here question my ability to operate the business. I was almost retired on the spot.

Putting the carving in a dark corner of the post, I thought nobody would notice it. The corner was not dark enough, however, because from time to time I would hear a “What is that?” and I know somebody has discovered me. The carving was set back by the rug racks, which when she was young was one of Kira’s favorite hiding places, and the piece always unnerved her. One day I came to work to find a cardboard box over its head. I pouted a little over the insult and put the box back under the counter, pending an inquisition into who had done the dirty deed. Nobody would admit to the cover up. A few days later, I caught Kira sneaking around the corner with the box, climbing up, and placing it over my head once again. Apparently, she didn’t like me watching what she was doing behind the rugs! After that, the carving wore a headdress so boxes could never again disgrace me.

With that, my emotional parking lot is clean! Oh well!
Posted by Tied to the Post-Twin Rocks Trading Post at 2:34 PM