A holy man once said, "He who loses his life shall find it." I have often pondered that bit of wisdom and wondered how it applies to me. I am sure, one day, I will understand the depth of the message. For now, I am still trying to understand and fully appreciate the life I chose so many years ago when I decided to go into the family business, to become an Indian trader and restauranteur. Earlier this week, I met an old insurance salesman from Arkansas who had been in the store. As we talked about his agency, the life it allowed him to build, how he hadn't had a real vacation in several years, and his inability to convince himself it was time to retire, he said, "It's hard to kick an old dawg off a gravy train." 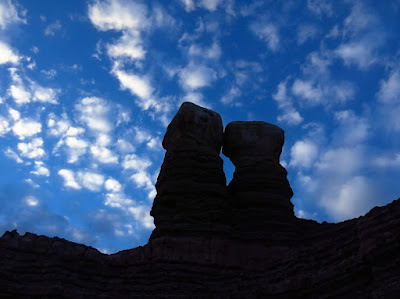 For this part of the country, I think Steve and I have engineered a pretty good locomotive. The gravy is thin, but it is gravy. Since our precious children have grown and moved their lives north of here, Laurie has become convinced we need a few more "Tender Vittles" in our doggie dish. My wife doesn't understand how I have gotten so embedded in the trading post and cafe. She recently accused me of spending all my time and energy on the business, thus leaving precious little time for visiting the kids and with her. I gave Laurie all the standard explanations, but she wasn't buying it. My wife sometimes thinks of my chosen profession as "a futile effort.” Sometimes I feel the same and have trouble expressing my passion for the place. Because of the inability to express myself properly, I have a bad habit of redirecting the dialog and attempting senseless abstractions. Laurie, long ago, caught on to my strategy, so she is more difficult to maneuver. In response to a recent distracting discourse, she gave me a harsh look, and said: "As usual you have taken a meaningful discussion and twisted it to suit your needs." "Well that's the way I interpreted it, and isn't it all about interpretation anyway," I pleaded.

My wife rolled her eyes and shook her head in disgust. She picked up her keys and headed towards the door saying, "You are impossible! I have to go to work now." Out the door she went, mumbling to herself in frustration. As I watched her depart, a smile of satisfaction for winning the debate spread across my face. My eyes fell upon our three children, who were home for the weekend and gathered at the kitchen table for breakfast. They had witnessed the entire event. All were shaking their heads and rolling their eyes, just like their mother had done. My middle, sassy child, Alyssa said, "You have got to be kidding! Don't you ever learn?” McKale my baby said, “Wasn’t it you who said: “When it comes to an argument with your spouse, even when you win, you lose?"

Before another “Discussion” ensued, a horn blasted outside making us all jump, and giving the kids a chance to wander off. Noticing Laurie gesturing from the driveway, and thinking I may be in for an apology, I pushed open the window to hear what she had to say. “There will be a class, at the church, on marital communication this Thursday---we should go." I groaned inwardly and waved as she drove off, grumbling under my breath, "What the heck can I learn about communication that I don’t already know? I communicate quite well thank you very much.” The last man standing, my son Spenser, tsked sadly, and walked away.

Later that same morning I was making my daily Postum run to the cafe when I ran into Nicole, a very nice young lady who once worked for us and was back for a visit. Nicole’s father and I went to high school together. I am very fond of him and his family. He had a business in Blanding, so we saw each other quite often. I consider him a good friend and appreciate that he had entrusted his daughter to us for training. I had intended to send my kids his direction when they were old enough to be indentured, but that arrangement never came to fruition.

I asked Nicole how her father was getting along, and she told me that he had become so disenchanted with the struggles of small-town business that he had sold out and moved north to work for someone else. He felt like he had made a wrong turn on the road of life by coming back home when he finished college, that he had done his wife and children a disservice by settling them in such a rural, economically challenged area. His earlier decision had come from the heart, and was based on emotion rather than sound economic principles. He had returned to support his parents as they aged and to give his children the opportunity to enjoy a closely knit extended family. Growing up in a small town had provided Nicole's father with a strong sense of well-being and a solid foundation in a world that does not always provide such fringe benefits. He simply wanted to offer his children the same experience. I know exactly how he felt. I have had the same thoughts. But, he had bowed to the pressure and given up the dream, moving his family upstate. The move had been good for him and his family; he is doing quite well right now.

As I wandered back to the trading post, I found my brother and business partner, Steve, polishing the glass counters to perfection. I don't know what it is with him and Windex. It may be an obsession, perhaps an escape. Anyway, I told him what Nicole had said about her father. Steve nodded his head knowingly and went back to the never-ending chore of removing fingerprints from the showcases. I know he has often contemplated those same issues. When I look back at the reasons my family and I are here, I realize that they are similar to those embraced by Nicole's father to rationalize his coming home. He had to give up on that dream when he moved away.

Our parents provided us with a safe and secure home when we were young and have supported us in all of our endeavors---as long as those undertakings were honorable. Our sense of family and community runs deep for us in San Juan County. Wasn't it Dorothy who said, "There's no place like home"? The relationships we have developed through the years are more valuable than any material possession we could have acquired. It feels good to be here at the trading post and cafe; the harmony and dynamic of the place are in tune with its surroundings. Here you will find a truly human and friendly atmosphere, not because of Steve and me. We are mostly antagonistic and unpleasant, and getting worse daily (especially Steve). Maybe there is more time and room to grow out here. Maybe our faults are generally overlooked, or just ignored. At any rate, we have made our decision and must live with it.

When Laurie asked me to marry her, I mentioned that she would have to learn to live with imperfection if we got together. She thought I was kidding, but has come to know the truth in those words. Laurie puts up with my nonsense with the patience and love of a Latter-day Saint. She provides me with enough freedom to hang myself on a regular basis, but has always been there to loosen the noose when I begin to choke. She knows in her heart that I would be out of place in any other setting. I believe Nicole’s father made the best decision for his family and that both of us are truly where we should be. Only occasionally does Laurie force her hand, and drag me off to some communication in marriage seminar. I think she feels there is still hope for me.

While the economic rewards may be sparse, the emotional benefits of being on this gravy train are immeasurable. I think I'll stay until I am a very old dawg---God willing and the rocks don't slide.
Posted by Tied to the Post-Twin Rocks Trading Post at 3:05 PM