Where the River Meets the Rez

As I have mentioned countless times in our weekly missives (because I am in the repetitive phase), Priscilla and I have been laboring at the Twin Rocks Trading Post sales counter together for just a few months shy of 30 years. While she and I have been here from the inception, Barry, since he was at Blue Mountain Trading Post, our sister location, such a long time, claims he is eligible for inclusion by attribution. Priscilla and I are not so sure, but have agreed to take his petition under advisement. We are presently researching the request, and while we think he may have a 50/50 shot at success, we are not encouraging him. We find ourselves likely loath to allow Barry to horn in on our history. We do, however, want to keep an open mind and foster good relations, so we are willing to accept the possibility that he may actually develop an actionable argument.

In addition to our durational discussions, since Barry and I were delivered to Bluff head first about six decades ago, we are sneaking up on the title of "Old Men of Bluff." Barry, being a little more advanced in age than I, has a leg up and has attempted to assert his advantage. Melvin, our age-old associate from across the avenue is, however, firmly holding on to that esteemed appellation, so Barry’s pronouncements are perfectly pointless. 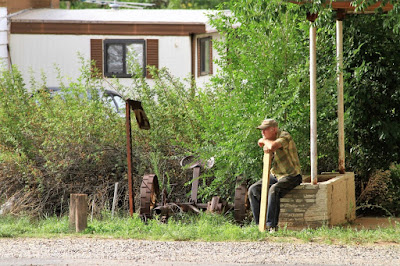 In his middle 80s, Melvin, but for a stint in the United States Army during the Korean Conflict, has called Bluff home since his own inception, or conception, as the case may be. Melvin is universally loved and admired by the residents of this geographically hidden hamlet. Barry and I are, well, not so much. We are, however, working to improve our image. Indeed, I have registered Barry for Teddy Bear Training, which dovetails nicely with the new Bears Ears National Monument envisioned by President Obama and eviscerated by President Trump. Between his soon to be perfected snuggling skills and the notoriety this area has received as a result of the Bears Ears proclamations, he is hoping to increase his weekly ration of hugs, which is recently retrograde. Priscilla has cautioned him he will be fortunate to get an occasional squeeze from his spouse, let alone a tight waist from a tourist. She has also admonished both him and me that I am unlikely to respond to training of any type so we shouldn’t waste our time or money on that boondoggle.

Priscilla at times thinks she should be considered for the position of "First Woman of Bluff," even though she does not live within the city limits. She does not want anything to do with the term “old” and has therefore amended the title to suit her own needs. Much to our surprise, after working with her all these years, we recently discovered she cannot definitively establish her existence. A while back, for certain undisclosed reasons, she began requesting her birth certificate and discovered that she does not exist. After an exhaustive search of local, state, and Navajo Nation archives, she was determined to be "persona non grata." Nobody can find any record of her birth and nobody will vouch for her arrival onto this earthly plane. Barry and I have consequently suspended her pending a conclusive culmination of this conundrum. How, we wonder, can she even make it to work if she is not extant? And, why should we continue signing her paychecks if she cannot positively prove she is actually here? What are we supposed to do---take her word for it?

Before Priscilla's birther bamboozle arose, Barry and I developed the habit of sitting in the wooden chairs arranged around the showroom until Priscilla arrives and jolts us into action. The idea was to allow time to address riddles such as this. When Priscilla's grandkids are not in town, that might have been around 10:00 a.m. When they are, however, encamped at her camp, it is later, sometimes much later. Between shepherding sheep and serving starving sucklings, it is a wonder she ever escapes.

Barry and I structured these morning "conferences" around old trading post photographs we have seen in historical texts and treatises. We assume that if it was productive for those old timers to sit around, talk, chew tobacco, and drink coffee, it should be for us as well. To date, that theory has not proven positive and all we have gotten is nauseous from snuffing Skoal and squeamish from slurping caffeine. We are not, however, giving up on sitting down. Now that Priscilla has been definitively determined a fiction, we wonder whether we will ever stop talking and actually get to work.

Often when he is not golfing, fishing, or hunting, our unofficial and unordained "Bishop of Bluff" Marx K. Powell, wanders through and weighs in. When Marx, who claims Karl Marx as his namesake, is in on the discussions, they can be an all-day affair. That is because Marx has information about the early days of the Gallup, New Mexico Indian art movement, the history of our small community, and innovative ways to add revenue to the bottom line that don’t involve indictments by the IRS. While his comments can be difficult to decipher, they do from time to time contain valuable nuggets. Marx is the grandson of Claude Powell, early inhabitant of Bluff, and Jack Powell, the widely-known trader from Yah-ta-hey and Black Hat trading posts. With a background like that, we figure he must know something, although we are conflicted about what that might be.

As the Priscilla predicament has persisted, customers are not being counseled, silver is not being sold, and turquoise is not being transferred, not to mention that Priscilla is not getting paid. This, of course, has created a crisis since cash is not collected or properly distributed. We have mentioned this to Marx, since he has offered sensible solutions to past problems, but even he is stumped. Barry has recently been looking into crowd sourcing to raise funds to lessen his liabilities, so he proposed using that vehicle to repopulate Priscilla. We are open to any suggestion, so post your postulations on #provide-priscilla-a-birthday. We look forward to receiving your advice.

And that, as they say, is the news of note from the land where the River meets the Rez: Bluff, Utah, United States of America. And, where Barry and Steve stoically sit in anticipation of an answer.
Posted by Tied to the Post-Twin Rocks Trading Post at 8:00 PM