A nice couple from Chicago walked in through the Kokopelli doors today looking for information. On his phone, the man had an image of a Bruce Hathale memory painting and wanted to know what we knew about Bruce and his brother Dennis. The couple was in their seventies and dressed for summer vacation. He was in the vicinity of 5'5" tall—pleasingly portly, had a ruddy, somewhat mottled complexion and an outgoing, gregarious nature. His blue eyes sparkled happily from behind black, wire-rimmed spectacles. The little man was clad in blue, khaki shorts that hit him at his knobby knees and was tightly encased in a darker blue t-shirt with a nautical theme, an anchor, upon the left chest. A pair of brown leather, Romanesque, sandals swaddled his ankles and stodgy toes. She was a good two inches taller than he and looked to be of Scandinavian descent. Her complexion was pale, her bobbed hair flaxen, and her eyes a pretty blue/green. The lanky lady’s temperament seemed calm and collected; there was a look of peace about her. Her figure was tall, lean, and slightly bent. Her color choice of preference was earthy. She wore tan, khaki hiker shorts with a ribbed, off-white, short-sleeved top and minimal brown sandals on her lengthy, manicured tootsies. 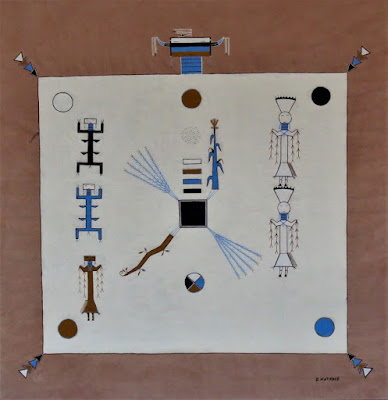 Memory aides were paintings on buckskin. These aides originated as a means of memorizing the multitude of ceremonies a medicine man must learn to practice the healing arts. The hides were rolled out and used as a foundation or stencil when a particular ceremony was performed. As time went on, medicine men decided it was best to commit the ceremonies completely to memory, so the aides began to disappear. With the old-style memory aides in mind, Roger Hathale, father of Bruce and Dennis, recreated on muslin (bedsheets stained with the local, red dirt to give them the impression of being painted on sand) ceremonies he was attempting to learn in order to become a practicing medicine man. Roger’s muslin recreations introduced drawings of the healing sand paintings to his two boys. When they matured, Bruce and Dennis began producing these “memory paintings” as folk art to help them make a living.

The man and his wife were on a quest to learn more about a memory painting they had acquired in Santa Fe 20 years earlier and the artist it sprang from. At the time, Bruce and Dennis lived in Blanding, the town 26 miles north of Bluff. Steve and I had bought and sold hundreds of their memory paintings over the years. We are also in possession of the same reference books the boys used as inspiration for their work. Because of the image on their cell, it was easy to discover which painting they had and the ceremony it referred to. After going over the facts of their painting, I noticed that the frumpy old feller was paying close attention to Priscilla, a little too close. His wife noticed his scrutiny, as well, but was doing a good job of playing it cool. That’s about the time things began to go wrong for the dear fellow. 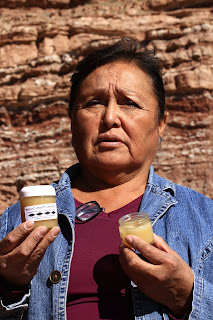 As I spoke with the man’s wife, Priscilla was showing him Nellie’s “Everything Cream,” the pinyon salve provided us by Nellie Tsosie that Nellie claims “will cure everything that ails you and make you more beautiful in the process!” As Priscilla laughingly explained Nellie’s assertions to the man, he asked if she used it. Dear, unsuspecting Priscilla said that she did, indeed. “I put it on cuts, bruises, my face, hands, and feet to alleviate chapped skin.” Lost in his attraction, the elderly Casanova smiled brightly, winked at our sisterly associate, and casually commented, “Well, you are quite lovely, AND, maybe with this cream my wife can look as good as you.” “Oh Dang!” I thought to myself as I snuck a side-long glance at the lady in waiting. Our neglected sweetheart now bore a severe look of warning in her flashing blue/green eyes. Even I, a master of marital missteps, would not, could not have gotten myself in this much of a muddled mess.

A look of distaste flashed across Priscilla’s face as she stepped back and away from the cad. That silly man must have recognized that his casual compliment had gone very wrong. My look of pity, Priscilla’s of contempt, and his lovely lady’s—of disgust—stopped him in his tracks. His dishonored damsel turned on her heels and headed for the exit, stage left. The poor man gave us a look of regret and quickly followed. We heard him exclaim as he passed back through the Kokopelli doors, “I am so sorry darling. There was no malice intended!” “Yah, well,” she retorted, “You should think before you speak!” 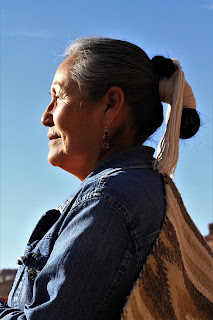 “Filters.” I said to Priscilla, as we watched them go. “What are you talking about?” Priscilla snapped back, still aggravated from the disagreeable discourse. “The older we get,” I calmly explained, “the more likely it is that our mental filters break down. This causes us to say things that should have been more carefully considered and perfected before becoming the spoken word. As you just witnessed, such thoughtless discourse can easily cause chaos.”

Priscilla thought about my comment before she spoke. “Well, that is certainly true with you and Steve, especially Steve, but THAT was over the top. A nice lady like that deserves more respect. He should paint To Love, Honor, Cherish, and Steer Clear of Stupid on muslin, frame it, and hang that memory aide on his wall!”

Posted by Tied to the Post-Twin Rocks Trading Post at 1:06 PM