The young man stood close to the sales counter, his eyes slightly downcast. With his freshly scrubbed face and carefully pressed walking shorts and polo shirt, he was the picture of a well-bred youth. Digging the toe of his river-sandaled foot into the carpet, he answered his mother’s inquiry with a determined, “No.” Unfortunately for him, his body language admitted what he would not. 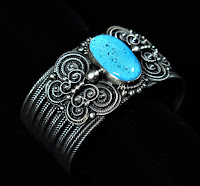 A few minutes earlier, as he and his parents entered the trading post, his father had gently, but firmly, instructed him to keep his hands in his pockets and not touch anything. Giving the boy a trickster’s wink, I inquired, “How will we make any money if kids are not allowed to break a thing or two?” The boy’s parents did not overtly express displeasure, but their disappointment was apparent. I imagined them thinking, “Don’t listen to the bad man. He will only cause you problems. You can tell from looking at him he’s trouble.”

Barry and I had been preparing to price certain antique jewelry pieces, so a Ray Lovato tab necklace, several bracelets, some earrings, and a few brooches were on the counter. The young man had not been able to restrain his curiosity and reached across the glass to more closely inspect one of the bracelets. As he did so, his inexperienced fingers fumbled and the cuff tumbled to the floor. It was at that moment the young man made a grave error.

Giving him a sharp look, his mother asked, “Did you touch that after we specifically asked you to keep your hands in your pockets?” “No!” he answered far too quickly, trapping himself before he could consider the consequences of his actions. At that point, an inquisition and lecture ensued. “Sweetheart, don’t you know you should never lie to your parents? What kind of man will you grow up to be if you can’t tell the truth? I’m not angry, I just need you to be honest, don’t tell me any stories.” When the boy still could not bring himself to admit the mistake, his mother said, “This is the way it starts, with a small, insignificant lie, and the next thing you know you’re stealing cars and going to prison for a very long time. Do you want to go to prison?” Up to that point I was supportive of the mother and felt she had been quite compassionate. Stealing cars and going to prison was, however, overstating things a bit. Not that I hadn’t used similar logic on my own children when they were young. These parents, however, appeared much better prepared to guide their child in the proper ways of the world than I had been. I have since learned a great deal about parenting and work hard at not making unsupportable statements.

As the couple walked out with their newly minted miscreant in tow, their comments reverberated in my mind. Although I had wanted to intervene in the boy's behalf, out of respect for his parents and with the hope he would soon redeem himself, I refrained from doing so. Barry gave me a knowing look and went back to his office. 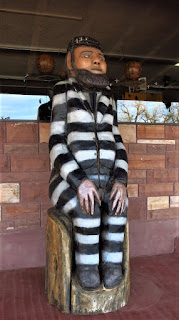 Standing by the cash register, I watched the family cross the parking lot and get into their car. They were extremely nice, and I regretted seeing the young man in trouble. As their vehicle pulled away, I sat down at the computer to write the next Tied to the Post essay. When I had finished the story, I asked Barry to let me read it for him. “Did that really happen?” he asked. “Yes,” I said defensively, looking down at the floor and digging my shoe into the carpet. Looking at me with a penetrating stare and a smirk on his face, Barry said, “You shouldn’t tell stories. What kind of man will you grow up to be if you can’t tell the truth? The next thing you know, you’ll be stealing cars and going to prison for a very long time.”

With Warm Regards,
Steve, Barry and the Team
Posted by Tied to the Post-Twin Rocks Trading Post at 11:52 AM