Most Sunday mornings, I am the designated manager at Twin Rocks Cafe. That is my reward for not attending church. While the cooks prepare breakfast, fry bacon, steam oatmeal, and bake biscuits, I sometimes stand at the south-facing picture windows, waiting for the sun to crest the eastern horizon. When it ultimately does, the sandstone cliffs embracing our small community glow with a stunning pink-coral radiance. It’s enough to take my breath away.

Promptly at 8 a.m., we illuminate the open signs and begin welcoming hungry travelers. Last week as I stood admiring the natural light, a late model pickup turned into the gravel parking lot. Hitched to the truck was a gooseneck trailer loaded with a vintage Ford F-250. The transport came to a stop and a couple in their early 30s hopped out and headed my direction. I could tell by the way they hurried along, they were in desperate need of a coffee infusion, so I alerted the server. 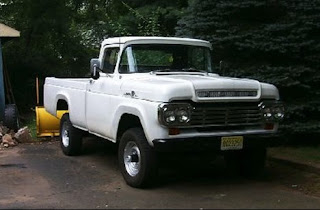 Once the pair had settled into a booth and placed their order, I asked about the classic car. “It’s her’s .” the young man said, pointing to his wife. Pleased I had taken an interest in her truck, she said, “It’s a 1959. Has some scratches and dents, a bit of rust; body looks good from afar; not so great up close; not bad for an old one.”


Feeling unexpectedly self-conscious, I surprised myself by declaring, “I’m a 1959.” “Oh, that’s interesting,” the woman said, wholly unaware she had exposed a nerve. For some reason, I could not help thinking that in describing the old ‘59 she had illuminated my own characteristics: more than a few scrapes and scars, not bad from a distance, but don’t look too closely. All of the sudden, I felt a strong affinity for the vintage truck.

Considering the current state of affairs: scratches, dents, worn joints, wiring not firing so well, leaky valves, and noxious exhaust, I was initially uneasy. Then I began to envision the adventures that old truck might have had in its prime. I thought of it tooling down a country road, feeling the excitement of new power and straining to find the limits, everything working at maximum efficiency. Over the sound of wind rushing through open windows, I could hear Elvis crooning Big Hunk O’ Love and My Wish Come True on the AM radio.

I conceived of projects started and completed: loads of building materials hammered into a beautiful home, rocks for landscaping, and bags of leaves raked from lush green lawns as winter approached. I could see children piling into the cab, on their way to camping trips, birthday parties, school events, and athletic contests.

The miles sped past, eventually delivering me to the present. There we were, the old truck and me, with all our warts and bumps, monuments to almost six decades of experience, rooted in the past, but looking ahead. It was then I noticed the young man’s ball cap. “Life is Good,” it proclaimed. “No, life is great,” I thought as the couple finished their breakfast and left to continue their journey.
Posted by Tied to the Post-Twin Rocks Trading Post at 2:26 PM