Twin Rocks Trading Post was packed with people. We had closed the cafe for a couple of hours to honor the wishes of our Navajo employees. Many of them still embrace the traditions of their forefathers and a solar eclipse is a big deal to The People. The Sun, Moon, and Earth are three of the most powerful of all entities and must be shown the proper respect when they, so obviously, interact. Taboos dictate restrictions of activity and viewing the celestial synergy. The idea is to be as unobtrusive as possible during the entire event. Cooking, cleaning, and serving others falls under the heading of “No Can Do!”.


During our temporary closure, many potential customers were standing around waiting for the House-on-Fire burgers and Peaches DeChelly dessert to come back on line. They didn’t mind lingering, but wanted assurances that we would indeed be reopening the cafe soon. While our patient guests dallied, they wandered through the trading post and about the parking lot watching the eclipse and conversing. Because Steve and I are not of the same mindset or constraints, we were working . . . sort of. I was perched on the high stool behind the counter while Steve sat on the porch steps talking to people and checking the progress of the moon’s shadow. Priscilla sat quietly in our office waiting patiently for the whole thing to pass. 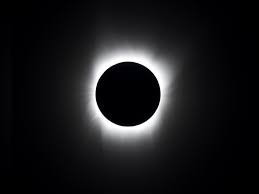 I sat there talking to several of the foreign tourists who passed by my perch while milling about the store. There were French, Italian, German, British, and a few others that I couldn’t easily recognize. As usual, it was my goal to learn as much about them and their “American Experience” as I could while they were in the building. Just after I wrapped up a conversation and purchase with a small and adorable Italian family, I looked up to see a Navajo gentleman in black hat and boots standing before me. He smiled brightly and said, “I couldn’t help but hear you speaking with those people about the eclipse, do you know the Navajo perspective?” “A little,” I replied noticing his neatly pressed burgundy shirt and creased Wrangler jeans, “but I am always ready and willing to learn more---if you are offering to educate me, I am listening.”

As he rocked back and forth upon his highly polished boots, the 50-something-year-old gentleman explained, “The Bearer of the Sun is the most magnificent and dynamic being in Navajo mythology. He is youth, vigor, and strength with a temper to match, thus his reputation for being uncontrollable. Mother Earth is the Sun’s partner, his mate. She projects discipline and restraint and is the epitome of affirmative action. She absorbs all negativity and redistributes it in the positive, nourishing, benevolent manner. Mother Earth controls all living things and promotes growth and upward movement. Some Navajo people believe that the Bearer of the Moon is a feminine entity, but most believe him to be male, the opposite of the Sun. He is an elder statesman, is restrained and self-assured, someone who has achieved confidence and projects stability.”

The man continued, “An eclipse is caused by the death of the orb which is revived by the immortal bearers of the Sun and Moon and the positive forces emanated by Mother Earth. During an eclipse, Navajo people must not eat, sleep, play, and interact on a personal level or travel. You are expected to sing or chant traditional songs related to the Blessing Way if you know them or, simply, be quiet and do nothing if you do not. Because the Sun and Moon deities have control over the life and death of humans, it is wise to patiently await the recovery, rebirth of the orb.”

During his explanation the man’s wife, a lovely lady, dressed in a floral print pullover and brown polyester slacks, browsed about the store, stopping and listening a time or two, then moving away. She seemed a trifle agitated or impatient, I couldn’t tell which, but there was something there. As he wrapped up his explanation I thanked him and said, “So you were raised traditional?” “I was,” he replied, “but I don’t believe that stuff now!” “Well,” I replied, “that is a bit of a downer, you had me going there. I was beginning to believe it myself.” Exasperated, I stepped into his trap and asked, “What DO you believe?”

“Well,” he said with a heavy sigh, “I believe that the end of days is near at hand. This eclipse is an ominous reminder to prepare yourself emotionally and spiritually.” His wife stopped her pacing just behind where he stood. She looked as if she might throw him in a headlock and drag him out the door. I thought to myself,  “This must not be a rare occurrence.” As we stood there looking at each other across the counter, he asked me in a matter-of-fact voice, “What do YOU believe?” I just stood there contemplating my reply while he stood there waiting for it. 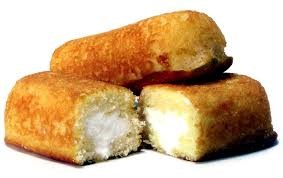 Inside my head, I was thrashing wildly about, trying to determine which way to take this conversation. What I decided was that I wanted it to end. Because it is usually quite easy for me to pull off, I decided to play the crazy card. Going with the first thing that came into my head, I said, “Twinkies, I believe in Twinkies! Every time I dip those golden sponge cakes with creamy filling in milk, I rediscover Nirvana. They are mana from heaven in plastic wrap.”

The man’s jaw dropped and a twinkle came into the woman’s eye. A look of exasperation covered his countenance and he began to speak, but the woman (Mother Earth?) took him by the hand and led him out of the building.

Posted by Tied to the Post-Twin Rocks Trading Post at 4:19 PM