Jamie on the Porch

It had been a quiet morning, so as lunchtime approached I pulled up the high stool which stands behind the sales counter, sat down and began reading the local news in our regional rag.  Apparently not much worth covering had happened over the past week, so the paper was thin.  To use a double negative, that was not unusual.  The Kokopelli doors were flung wide open and the sun streamed in through the entrance.  It was a laid-back day in Bluff, which was also not unusual. 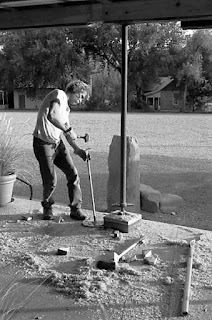 As I fidgeted on my trading post throne, wondering how the residents of San Juan County, Utah got by without generating more news for the reporters to report, I noticed an individual climb the stairs and approach the threshold.  Backlit by the afternoon rays, he appeared as a tall and rail thin silhouette.  For some reason I envisioned Joe Schemie, bass player for the band Three Dog Night. The words to their number one hit  Joy to the World ran through my mind and I began to question why that bullfrog always had mighty fine wine.  It could have been the wrap-around Ray Ban sunglasses, the longish dark hair and bushy mustache or maybe even the swagger that brought that particular group and that particular song to mind.  Or, it may have been just another flashback to my earlier years with no actual relevance to the individual entering the store. Whatever the case, this man in his late thirties or early forties reminded me of the Seventies.


Stepping just inside the entrance, the visitor placed his hands resolutely on his hips and in a smoky, gravelly voice demanded, "You buy from white guys?"  Looking at my inquisitor, I sized him up briefly and replied, "I don't care if you are purple, pink or aquamarine, let's see what you have."  He was taken aback by my response and stood unmoving for a moment, clearly contemplating the comment.  I was pleased as punch I had come up with such a creative retort and silently congratulated myself.  In any case, the man soon trotted out to his old Ford pick-up truck and retrieved a small package.  As he unwrapped the parcel, the peddler explained he had been in several stores from Grand Junction, Colorado to Moab, Utah and had been consistently told, "We only buy from Native Americans", which he clearly was not.  He had not even been allowed to show his work.  That, as you may guess, put him in a mean mood.  And that, as you may also guess, was the source of his agitation.

He introduced himself as James "Jamie" Olson and placed his work on the counter.  I was speechless.  His figurative "wearable sculpture", the likes of which I had never seen, was set with a variety of exotic stones and shards of legally collected prehistoric pottery.  The work was literally stunning.  Needless to say, we quickly arrived at an accommodation and I purchased his entire inventory.  That was almost 20 years ago, and Jamie and his art have been permanent fixtures at Twin Rocks Trading Post from that moment to this.  Because of our initial encounter, when people ask if Jamie is Native, we reply, "No, but we don't discriminate against white folks."

Jamie was born and raised in Palatine, Illinois, a suburb of Chicago, but immigrated to Colorado shortly after graduating high school in the early 1970s.  It was in 1994 that he started making jewelry.  As he likes to say, "Before that I mostly poured concrete and abused alcohol."  In May of that year he quit his job as a cement worker and gave up the hooch.  He has been sober ever since.  He now lives in and works out of a 1965 Winnebago, which is 7'x15', all inclusive.  The trailer serves as home, workshop and entertainment center.  To say Jamie likes things simple would be an understatement.  To say he has a few good stories would be a gross understatement.

Recently Barry and I convinced Jamie to lapse briefly back into concrete.  Although alcohol is strictly forbidden, cement is grudgingly allowed, from time-to-time.  When Twin Rocks Trading Post was built, the porch posts were improperly set and, as with a few Twin Rocks Trading Post employees, there has been some sagging.  Jamie agreed to saw off the poles, evacuate the old wood, fill the voids with cement and replace the beams.  "The employees", he said, "were on their own."

As Jamie has prosecuted his construction project to completion, an unending stream of admirers and interested parties has engaged him.  This has caused Jamie to offer his services on the porch for an extended term.  He is having such a grand time he even said he would work without pay if necessary.  According to Jamie, he has received overtures from numerous European ladies, both young and old, attractive and otherwise; employment offers from prospective employers  across the nation; and even a few opportunities he will not openly discuss.  "I love Bluff too much to leave", he explains when asked why he has not accepted any of the proposals.

The other day I came back to work after attending one of Grange's high school cross country meets to find Barry and Jamie designing a heating grate similar to the ones homeless people in New York City seek out during cold months.  "What's that?" I inquired. "It might get chilly this winter", Barry explained, "and we have to keep Jamie warm."  Jamie has apparently discovered the magic of Twin Rocks, and I have consequently begun to worry what happens if the word gets out.  If it does we may have to build a few more grates.

With warm regards from the Twin Rocks Trading Post staff.

Posted by Tied to the Post-Twin Rocks Trading Post at 3:08 PM