Of Hats, Saddles and the Boot

A businessman walked into the trading post and said to me, "Can you help me out friend? I have been on the road longer than expected and am worried my wife may be angry and have the door barred when I get home." Looking at him suspiciously and transitioning into my bartender routine, I asked, "Does she have reason to bar the door? Have you misbehaved?" Vigorously shaking his head from side to side, he replied, "Other than being a less than adequate communicator, I am a good and faithful husband. I love my wife, but often forget to keep her updated and informed." "Sounds familiar," I replied. "Step over here. I will show you our line of spousal appeasement merchandise and relate a story or two."

I told him that in the good old days, when communication was fairly simple and straightforward, Navajo men had an uncomplicated way of discovering if they were in the soup or not. If there were any question, a man would walk up to the Hogan, remove his hat and toss it in the door. If his companion were not upset, the hat would return unmolested. The gentleman would pick up his topper, dust it off and step into his home with a feeling of peace and security. On the other hand if his derby came back in a state of disrepair, he would have time to consider the implications and evaluate his options. The more damage done on his headgear, the more dire the state of affairs. It was a great way to divine one's domestic circumstance.

When Steve and I first heard of this solution to comprehending the mood of our spouses we adopted it posthaste. We informed our wives of this system and presented them with hats we had chosen for initiating the process. Since I am well balanced and adept at expressing myself, I figured there would not be much abuse in my future. I therefore chose a hat of straw. When I presented it to Laurie, she accepted it, contemplated the implications of my actions and promptly swatted me with it. I began to question whether I had made the right choice.

Steve, on the other hand . . . well, has a way of arguing a point with what he considers to be rational thinking. It is my opinion Jana and Laurie base their actions on equal parts, rational thought and emotional response. Steve has earned two law degrees and is great at negotiating business deals. Let's just be honest, however, the boy rates poorly when it comes to communicating effectively with Jana. That woman deserves a medal of valor when it comes to debating marital issues with him. I suggested he choose a German pith helmet for his headgear, one of steel that could survive a panzer attack. He foolishly selected a stark white Resistol 10X premium fur felt hat. When he presented it to his significant other, she stomped it flat, tore the edges and sent it sailing out the back door. Based upon historical interaction, Steve rightly considered that was a negative reaction. 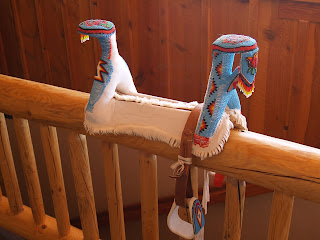 While we were on the subject of Navajo life ways, I shared a story of a medicine man that seduced a fair maiden of the high desert. He won over this svelte Native princess by proving to be well versed in the language of love. Although he was an overly large and not so handsome man, the hatathle was wise and worldly. The older man realized the young woman desired to learn and grow in knowledge and understanding. Through persuasive speech and extensive deed he convinced the young woman he loved her beyond measure and would always treat her like the rare and beautiful yucca flower she truly was. Thoroughly convinced, she fell for the conniving suitor.

All was well for a short time, but soon the medicine man began to take the maiden for granted and treat her as a prize mare to be paraded about and managed as if she were his personal property. The woman grew frustrated with her powerful husband because he no longer doted over her and never did anything to help around the house. His new bride came to loathe him and resent the union. In all respects she was nothing more than a slave. The maiden, however, was both bright and beautiful, unwilling to spend her life at the feet of a deceitful and demanding husband.

The little lady was well aware she had the right to divorce her lowly mate. Hers was a matriarchal society, and it was her privilege to expel this worthless cur from her life. One day when the medicine man departed for a traditional ceremony, the beauty placed his prize saddle outside their Hogan. The statement had been made, there was no question, and a split was imminent. Upon his return, his eminence simply picked-up the saddle, strode into their home and returned his property to its usual place. Immediately demanding drink and dinner, he would not concede to an interruption of the relationship.

The Navajo princess was not, however, dissuaded. The next time her spouse departed to practice his craft, the lonesome dove asked her brothers for assistance. The three siblings did a fast and furious, but altogether serviceable, remodel on her abode, one they hoped would repel the beast. Once again, the healer discovered his prize saddle resting in the dust. As before, he picked it up and headed for the door. This time, however, the entryway was but a narrow slit, slim enough to allow his new ex- wife ingress and egress, but far to small to allow his bulky frame to enter the Hogan. He had been resoundingly rebuffed and finally admitted defeat. Packing up, he remounted his fine steed and left the country in search of a more submissive mate.

"A few lessons we might learn from this mishmash of information", I said to the man, "are that: (a) communication is key to successful relationships, (b) a good and durable hat may be an fair indicator of your marital status, and (c) finding your saddle outside may demonstrate you are not paying close enough attention to your spouse's desires. Hopefully you do not learn these lessons too late to repair a bad situation. Be advised, narrow doors banish narrow minds, and being outwitted by an intelligent woman is all too common."

The businessman absorbed the metaphor admirably, purchasing a pair of earrings to validate his marital love and buying himself a woven palm cowboy hat from the gift shop next door to reopen the lines of communication. I hoped it would be enough to mitigate her frustration. As for Steve's attempts . . . well, that is a work in progress!

With warm regards Barry Simpson.
Posted by Tied to the Post-Twin Rocks Trading Post at 3:09 PM