For years I have struggled to adequately thank my father for the support and direction he provided during my youth. Like most sons of my generation, and all generations that have gone before, I am paternally challenged. Although I have tried in many ways to tell my dad I appreciate everything he has done for me, it never seems to come out right, or at all. If I start to jot down my thoughts, my pen and brain seem to simultaneously stall, creating a practical and emotional logjam. If I try to tell him, I just cannot seem to get the words out. After many failed attempts, I have decided to give it one more try, before one of us leaves this world. This then is mea culpa; my thoughts and confessions about my pop. 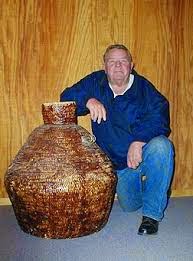 Over the past several years I have realized the more I try to differentiate myself from him, the more I become like my father. The more I experience in life, the more I understand what he encountered trying to raise five children in such a challenging environment. After one recent occurrence, I found myself responding in precisely the same way he would have 25 years earlier. My friend Dave always jokes that he frequently looks in the mirror and gasps, “Dad?” I am beginning to feel the same.

As a child growing up in this small town, the two things I remember most are unrestrained freedom and my father working a great deal. My dad, William Woodrow “Duke” Simpson, always seemed to be up early for work, returning home late in the evening. I imagine he must have felt like the mother birds that nest in the eaves of the Twin Rocks Trading Post porch. These mommas are never able to keep up with the needs of their hatchlings. While Duke was scrambling to meet our demands, mother Rose attempted to keep us out of harm’s way and prevent our long-term incarceration.

Duke had a saying that went something like, “Rose, those kids could break an anvil,” which was generally true. As a means of preventing us from destroying what he was trying to build, Duke always managed to keep us busy. If he had been a religious man he may have said something like, “Busy hands are happy hands,” or “Idle hands are the Devil’s workshop.” Instead, he would simply say, “Don’t you have anything to do?” If the answer was “No”, he had little trouble finding projects to keep us engaged. Initially he put us to work as attendants at a small filling station he rented on the south side of Blanding.

When we were at school, Rose and Duke took over. It was not an easy time for any of us. Although I resented the restriction the job placed on my free time, I was happy to have a little folding money in my wallet. I felt like a king when there were a few bucks in my pocket. Duke paid pretty well; a dollar an hour. It was not until much later I realized what those years of running the business taught me.

The filling station was probably the start of our venture into the trading post business, although there are many other influences that may have been the true catalyst. The local Navajo people frequently wanted to exchange turquoise and silver for gas and oil, and that ultimately resulted in the construction of Blue Mountain Trading Post.

I cannot remember how old I was when Duke began taking us on buying trips; possibly nine or ten. What I do recall is that he was always ready to pack up and head out on a new adventure. Sometimes it was a trip to a Colorado auction and sometimes it was a journey to the Phoenix flea market. No matter where we went, we universally had an interesting time. Duke was happy just to be on the road, and we were glad to see new places.

During one of those trips Duke purchased the entire inventory of a defunct shoe store. When he returned home, we had a yard sale that resulted in the shoeing of the entire town, for years. On another occasion he brought home a trailer full of western hats, shirts and jeans. The Blanding clothing market was nearly devastated.

These trips also allowed Duke to introduce us to the pleasures of the wider world. On one excursion to Colorado, Duke and I were driving through Moab when he asked if I wanted a beer. A short time later I was sitting straight up in the cab of the pickup truck with any icy brew in my hand. I could barely contain myself as I popped open the bottle. After one gulp, my excitement was extinguished. The taste was so bitter on my inexperienced tongue that my thirst for beer was permanently quenched. I think Duke knew what would happen, since a similar situation occurred when I acquired an interest in cigarettes.

As I graduated high school and college, I determined to leave Utah and never return. I had had enough of this state and my father’s business, so I left for the bright lights of the big city. I was convinced Duke was not quite as smart as he thought, and not nearly as bright as I. Surely he sees the irony in my coming back to the land, the people and the business he loves. I only hope he sees how much I appreciate the man he is, and the man he has helped me become.

With warm regards Steve Simpson and the team;
Barry, Priscilla, and Danny.
Posted by Tied to the Post-Twin Rocks Trading Post at 1:46 PM