Are You A Simpson?

Many years ago our sister Cindy began researching the Simpson family history. Having grown up in Mormon country, where determining one’s genealogy is essential to a full religious experience, she apparently felt compelled to unearth our own paternal roots. I have often wondered whether she initiated the enterprise after being led to believe we came from royalty and that she was, therefore, a princess. Simpsons, as we know, have vivid imaginations. That is, however, a different story that should be left for another day.

Having begun her project in earnest, she soon uncovered details better left in the past. Illuminating the activities of our ancestors was apparently an unnerving experience, and after arriving at that conclusion she folded her tent, locked the offending documentation in a chest and abandoned the undertaking. It is clear from what little information Cindy later disclosed that our antecedents were mostly outlaws, misfits, vagrants, miscreants and Democrats; the latter category being most worrisome. Intuitively understanding that our linage should never be open to the public, before Cindy began her investigative adventure I had consciously avoided the truth. Indeed, fearing what I might find, I steadfastly refused to interpret our family narrative. 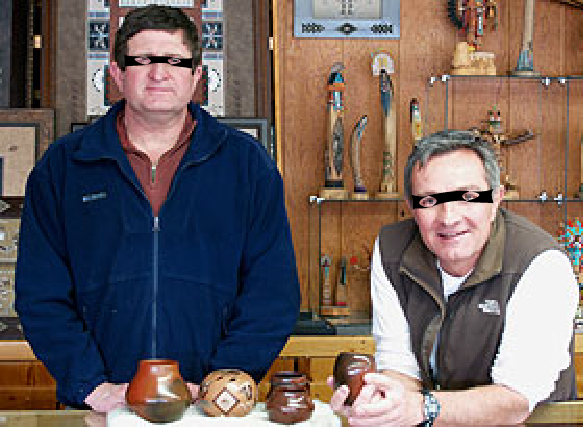 Last Tuesday as I sat at my desk trying to sort out the trading post accounting, which is always challenging, I was reminded of Cindy’s quest. Having heard the doorbell ring, I looked up to see a slender, well-dressed, middle-aged man enter the store through the Kokopelli doors. Since it was late in the afternoon, Barry had given up trying to peddle turquoise and was reclining in one of the wooden chairs strategically located in the middle of the showroom. “Good afternoon”, I heard Barry warmly greet the guest. “Good afternoon to you”, the man replied affably, “Are you one of the Simpsons?”

Knowing our history all too well, Barry’s posture straightened and he cautiously responded, “Well, that depends on whether you are from the CIA, FBI, NSA, IRS, ATF, EPA, BIA, BLM or one of those other governmental agencies designate by consonants and vowels and designed to trip up ordinary human beings. If, on the other hand you are from ABC, CBS or NBC, I have a story to tell, let’s talk.” While Barry was not interested in being incarcerated long-term, but was still looking for the fifteen minutes of fame Andy Warhol guaranteed us all.

Several years before, after a particularly harrowing federal raid in Blanding, Barry and I had been advised by a lawyer who came wandering into the trading post to always stonewall when people asked for information. This shyster had counseled that we should never voluntarily divulge our personal affairs. “Never give ‘em anything”, the ambulance chaser cautioned, “make ‘em work for it. If you directly ask ‘em if they work for the feds, they have to tell ya, then you’ll know and won’t be entrapped.” Since I cannot keep a secret, that guidance was lost on me. Barry, on the other hand, was obviously following the jurist’s instructions. He seemed worried I may have made some grievous error he had yet to identify and this guy knew more about that particular issue than he was willing to reveal.

“No, no, none of that”, the gentleman replied, “just met a character in Blanding who said he had two sons here in Bluff. Thought you might be one of them. I think his name was Ace or Duce.” “Duke”, Barry corrected. After a bit, Barry relaxed and began chatting amiably with the visitor. He had obviously forgotten about going to jail and was thinking there might be one last chance to sell a Navajo basket, rug, folk carving or piece of silver jewelry.

As I watched through the tinted glass of my office, the dapper man closely inspected Barry. Sensing nothing was amiss, after a time I went back to my accounts and left Barry to address any ongoing issues. When he had concluded his analysis, the dandy turned to go. Before exiting he said, “By the way, while I may not be employed by any of those organizations you mentioned, if I were with the fashion police I would have to charge you with a first degree felony for violating the IDC, International Dress Code.” Obviously impressed with his own humor, and chuckling to himself, the man strolled out, glowing like a new penny in the late afternoon sunlight. Barry self-consciously smoothed the wrinkles in his Twin Rocks Cafe T-shirt and uttered an oath he had long ago learned from our neighbor Opal Hooper.

With warm regards Steve Simpson, and the team; Barry, Priscilla, and Danny.
Posted by Tied to the Post-Twin Rocks Trading Post at 6:01 PM