A Holiday from the Holidays

Last Saturday I had to work the trading post by myself. Steve and Grange had scrambled off to the Beehive Brawl, a wrestling tournament held in Richfield, and Priscilla had been roped into attending a reservation rodeo with her husband. So, except for the staff next door at Twin Rocks Café, I was flying solo. I actually enjoy working alone; it gives me the opportunity to be myself. When I know no one will be checking in, I sometimes stop at the grocery store in Blanding and pick-up Vienna sausages and Pillsbury crescent dough. When lunch arrives, I use the ingredients to roll myself a poke of pigs-in-a-blanket. Now that is good stuff! My wife does not allow Kipper Snacks, potted meat and other similarly tasty delicacies into our house, so I have to sneak around.

Morning traffic at Twin Rocks Trading Post was slow and I was hungry, so I fired-up the oven and baked off a batch for brunch. The piglets came out a gorgeous golden brown and smelled wonderful. The Pillsbury Dough Boy would have been proud of me. I ran next door to the cafe and grabbed a Coca-Cola and some of our world famous fry sauce for added flavor. Just as I was returning to the trading post a car drove-up. The driver exited his vehicle, came up the steps and entered the store. I had forgotten the first rule of running the operation by myself; order lunch and customers will come as soon as it's ready. Neglecting my porkers, I struck-up a conversation with the curly-haired, blue eyed man dressed in tweed. Come to find out he was from Wimbledon, England, and was interested in a Yei-be-Chei rug.

As the Wimbledonian and I discussed Navajo weaving, a second car drove up and another man strode in through the Kokopelli doors. I groaned inwardly, realizing cold wieners would soon be on the menu. Noticing he was tightly wound, I kept track of the new guy as I spoke with the Brit. The nervous man wandered the store aimlessly, clenching and unclenching his hands and mumbling unintelligibly. He looked to be circling 60, was approximately 6' tall and was lean in an unconditioned manner. This guy seemed prepared for hiking. Under a thinning head of salt and pepper hair his pale face displayed a two or three day growth of gray whiskers. His hazel eyes were glazed, and I speculated his manner might be mine if I did not quickly get at my lunch. 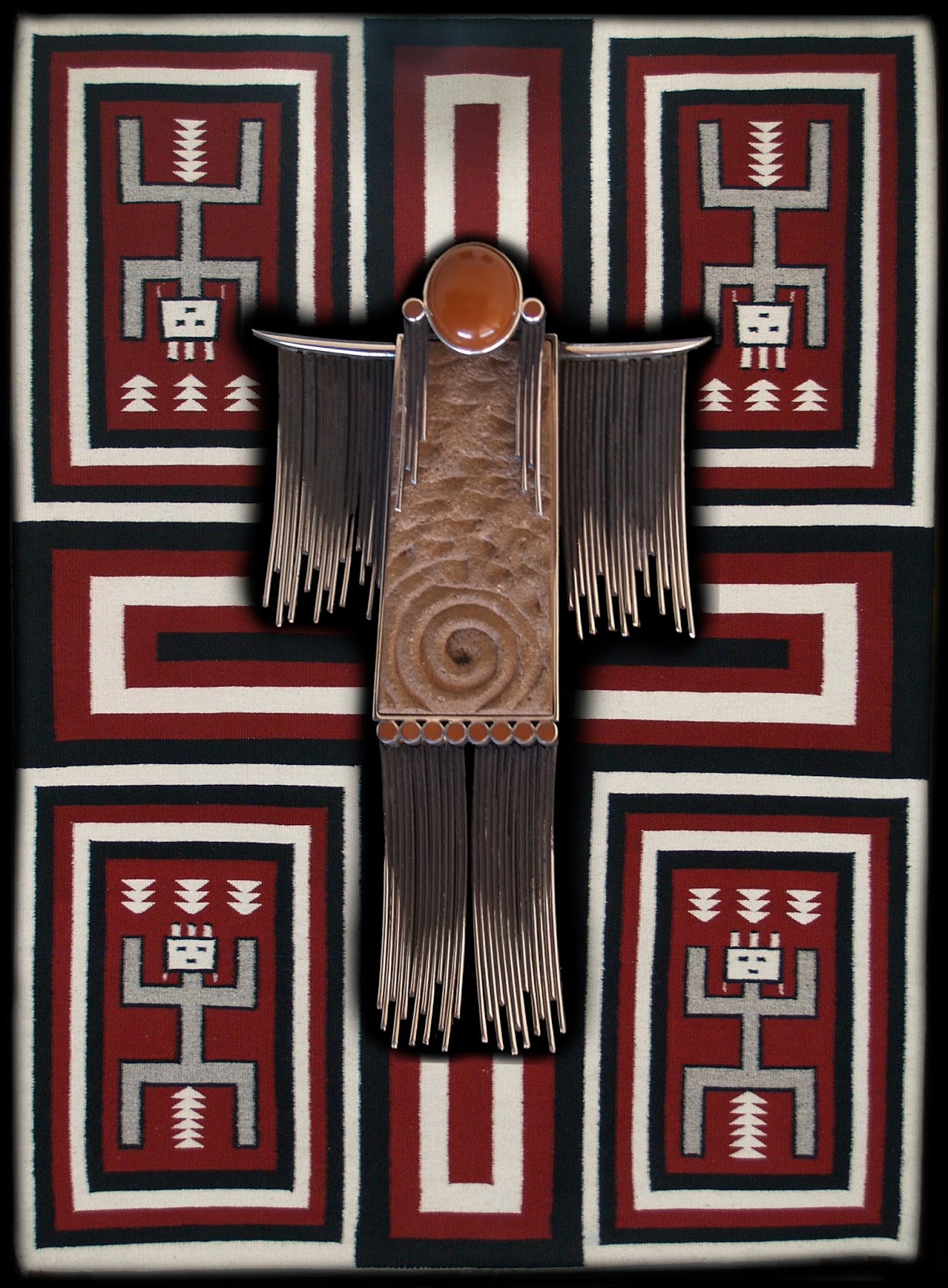 Closing a deal with the Englishman, I wrapped the weaving in brown paper and thanked my patron for his business. He departed for parts unknown. Turning to the haunted hiker, I struck-up a conversation, quickly discovering he was from New York City and on a much needed holiday from the holidays. He said he held a lease on a large downtown loft and it was customary for his siblings and their families to spend the Christmas and New Year holidays with him. He assured me he loved his family, but ten days with this group of relatives in such close proximity was, at best, strenuous. This, along with living and working in the "Big, But Rotten Apple" had him treading an emotionally treacherous path. The nervous New Yorker told me he was in much need of our clear, crystalline skies and "appendicular" canyon country to soothe his damaged soul. As he admired Jamie Olson's jewelry, he explained the trip was about, "re-establishing a connection to the natural world and dissipating negativity."

Pointing to the white SUV parked near the sunbonnet rock, the distressed dude claimed it was stuffed with rented camping gear and a cooler packed with food. "Food", I thought to myself, "I could really use a pig-in-a-blanket right now." My stomach rumbled audibly. The man told me he was awaiting a text imbedded with GPS coordinates to a high deserted mesa with a view of Elk Ridge, the Abajo and San Juan Mountains and, if one looked carefully, Monument Valley. Most importantly, he said, he wanted an unobstructed view of the heavens. Nature Boy told me he had recently discovered an ancestor had passed through the Hole-in-the-Rock. That had piqued his interest in San Juan County. While researching his past, he stumbled onto several local authors, including Albert R. Lyman, Robert S. McPherson and David Carpenter. He had also found a hand-full of Blue Mountain Shadows periodicals. It was his intention to spend an entire week studying local history while disconnecting from the real world. I could not help commenting, "How nice would that be?"

The man from Metropolis seemed to grow calmer as we spoke about his upcoming adventure. Just then his cell phone beeped, he reached for it greedily and looked at the screen. "Yes, there it is," he chirped. He grabbed-up turquoise pendants for his wife and daughter, and happily left the store. As he drove away, I said to myself, "I am jealous!" Remembering the long neglected lunch, I returned to my office and grabbed-up a plump, golden pig and popped it into my mouth. "A cold pig is better than none", I thought as I munched away. Just then the door chime went wild and a cluster of new customers streamed in. "Stink," I mumbled through my stuffed face, "the next time I make pigs-in-a-blanket Priscilla and/or Steve will be here to cover the store while I chow down." Taking a quick swig of Coke, I smiled brightly and greeted my new guests.

With warm regards:
Barry, Steve, Priscilla and Danny; the team.
Posted by Tied to the Post-Twin Rocks Trading Post at 11:34 AM