I winced noticeably as Etta and Jackson Rock's gray Dodge pick up truck pulled into the graveled parking lot. It's not that I dislike those crazy kids; I love them. The problem is that when Etta struggles out of the truck, hobbles up the front steps and limps across our threshold, it always costs us money. Etta, with the help of Jackson, is one of the last of the pitch pot artists, and Etta is the couple's front man . . . (woman). Because of her painful stride, beautiful smile and embracing demeanor, Etta is hard to turn down. We have more pitch pots in the trading post than we have common sense. Neither Steve nor I can turn Etta away. This time, however, things were going to be different. Steve and I quickly discussed the situation, enough pitch pots were, surely, enough! 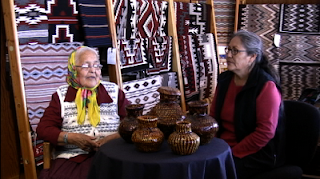 Video of Etta Rock & Priscilla Sagg Interpreting
When Etta and Jackson arrived, Danny and I were in the rug room recording product videos for our weekly e-mailer. Steve was behind the counter writing descriptions on the computer and Priscilla was cleaning the glass, cussing us all for leaving sticky fingerprints. I was the first to recognize trouble and stood up from behind our props to make sure it really was the Rocks. I saw that it was, indeed "the most successful sales woman ever to walk the streets of Bluff." "Priscilla," I nearly shouted, "go tell Etta we are broke and can't afford her pot. If she makes it up the steps we are done for." Priscilla looked up from a particularly nasty smudge, gazed outside, shook her head in the negative, and said, "Don't make me the meanie, this is your store!"

I looked to Danny, but realized he had never even met Etta. By now Etta was up the steps and pressing on the Kokopelli doors. I hurriedly did an inventory of her artwork and told Steve, "We have at least a dozen pitch pots and really don't need more right now." Steve nodded in agreement and raised his hand in an I'll take care of this manner. Etta pushed her way in and crossed the threshold, emphasizing her effort with a small gasp. Steve declared forcefully, "Etta we cannot buy your pot today, we already have too many." Etta did not even break stride. Instead she walked right up to Steve, cooed softly in Navajo, placed her package on the counter and began unwrapping the plastic bags embracing her offering.

Steve looked to Priscilla for help. Priscilla stepped forward, and in Navajo, explained our predicament to Etta. She laughed merrily, reached into the the wrappings and produced her magical pitched basket. She placed it on the counter and turned her big brown eyes on Steve who began to squirm. Steve, seeming to have an epiphany, turned to me and said, "Maybe we can get Etta to give us an on-camera interview." Priscilla interpreted, and Etta informed us that she would be happy to, but it would cost us. "Here it comes," I groaned to myself. Steve then asked Priscilla to ask Etta if she would give us an interview if we bought the pot. "Of course!" was her reply.

Thirty-two minutes later we had a marvelous interview with this grand old lady of the weaving arts. Even I was happy with the deal. As Etta was wrapping up the interview, she mentioned how the woman who buys her pots at the Kayenta Holiday Inn is happy to buy her lunch when they are through bartering. Realizing I had been had, I reached into the till, removed a twenty, handed it to Etta and sent her over to Twin Rocks Cafe. After Etta left the building l turned to Steve and said, "The next time that woman shows up, we are barring the door; she is not getting in here again!" "Agreed." said Steve. "Yeah right!" chortled Priscilla.

With warm regards,
Barry, Steve and The Team

Enjoy artwork from our many collector friends in Living with the Art!
Posted by Tied to the Post-Twin Rocks Trading Post at 1:06 PM