Flours in My Hair

After a full day spent on the mats coaching Grange in his first wrestling tournament of the season, the following morning came too fast. As I struggled out the door towards Twin Rocks Cafe for my Sunday morning shift, my joints were stiff and sore, so I hobbled a bit. Napping in their car, Janelia and her daughter Menvalia, our morning cooks, waited for me to arrive. About 100 yards west on the deserted Twin Rocks Drive I could see Corri, the waitress, and Kory, her boyfriend, walking towards the restaurant. 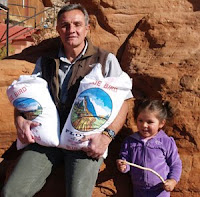 As I approached the front doors, I noticed a large ball of black fluff lying on the door mat. “Oh no, another stray,” I thought. As I got closer, however, I realized this was not just any abandoned dog, this one was obviously well fed and well loved. Around his neck was a new collar adorned with several tags identifying himself and his owner.

After opening the doors for the crew, I reached down to give the dog a pat and check his ID. As I do so, he rolled on his side, requesting a scratch on the stomach. As he went over, I noticed his eyes were clouded and he creaked when he moved. “Kindred spirits,” I said as I stiffly patted his head and read his information.

“Bosco,” the tag said, “435 . . . - . . . .” By this time Corri and Kory had arrived. Being young and wired, Kory promptly reached into his pocket, pulled out his telephone and in a matter of seconds was speaking with Bosco’s owner. “I’m just around the corner,” the dog’s master excitedly said, “I’ll be right there. I’ve been looking for Bosco all night.” Five minutes later a truck sped across the gravel parking lot toward us. After explaining that Bosco was mostly blind and had wondered away late the previous night, the pet owner reached down, gently took hold of the dog’s collar and towed his best friend away. As Bosco rigidly waddled down the porch, guided by his master, I reiterated, “kindred spirits” and shuffled inside.

“I need two flours,” Janelia said as I entered the cafe. Instinctively understanding what she meant, I walked to the storage room and retrieved two 50 pound sacks of Blue Bird enriched flour. Throwing one of them over my shoulder like a longshoreman, and in the process raising a terrific white cloud around my head, I delivered it to the kitchen and returned for the second bag, repeating the process.

At the restaurant, frybread, a regional favorite, is one of the biggest sellers. We use it to make Navajo tacos, Navajo burgers, sheepherder’s sandwiches and as a side for soups and stews. The recipe is simple, one cup unbleached flour, one-fourth teaspoon salt, one teaspoon powdered milk, one teaspoon baking powder, one-half cup water and a little vegetable oil for frying. As anyone who has ever made frybread will tell you, however, not just any flour will due; Blue Bird is essential. Just as every New Mexican agrees Hatch produces the best chile in the world, every Navajo knows you never make frybread without Blue Bird.

Having been raised in a traditional Navajo family, Janelia can turn out frybread like Henry Ford turned out automobiles. Her traditional upbringing dictated that she learn Navajo before coming to English. As a result, she often comes up with inventive terms that are highly intuitive. The week before we had been talking about her car when she referred to her radiator as a “waterator.” Just as Baxter Liebler, the missionary who established St. Christopher’s Mission in Bluff, knew that “Boil My Heart for Me” meant he needed his jumper cables, I knew what Janelia meant. So, when she said she needed two flours, I understood no florist was required.

Having delivered the bags of flour, I resumed my duties. As the morning wore on and customers came and went, I notice several glancing at my hair and looking quickly away. The first few times, I did not pay much attention to the furtive looks, but after a time decided to peek in the restroom mirror to see if something was amiss. Looking back at we was a face I knew well, but with hair white as snow. As Janelia would say, “I had flours in my hair.”

With Warm Regards,
Steve, Barry and the Team.
Posted by Tied to the Post-Twin Rocks Trading Post at 11:00 AM