Christmas has passed and the New Year begun, so this morning Grange and I renewed our morning treks to school. Year after year I have appealed for snow during the holidays; mostly to no avail. This is the desert after all. Hoping my dismal results did not somehow reflect on my relationship with the Big Kahuna, I kept asking. Finally, my request was granted and mountains of snow blanketed the ground just in time for Christmas. Well, for Bluff these are mountains. In other places they might well be considered mere foothills, or just a skiff. 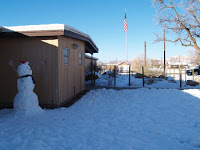 Two years ago, Bluff Elementary was awarded a Navajo Nation health grant. As part of the appropriation, the school administration developed a walking program for the children. Soon after Jana campaigned for a running program to enhance the project. The kids have responded, so Monday through Thursday mornings one can see the unruly mob of brightly colored kids hopping, skipping, jumping and chattering through the streets of this small community. It is a great way for the students to begin the day, and threatens to become a tradition.

Grange and his buddy Sammy have taken these excursions to the next level, and instead of walking a few blocks through town, they jog to the top of the small necropolis that juts up in the center of town, descend its northerly slope to the old pond road and scoot back to school along Navajo Twins Drive; a journey of about a mile and a half.

This morning as Grange and I left for school the snow shimmered like silvery glitter, flakes of frost cascaded from the cliffs and the winter flora swayed rigidly in its crystalline coat. To say it was cold would be an understatement; it was frigid. To say it was beautiful would be like calling the Sistine Chapel pretty; it was truly remarkable.

Since Grange and Sammy have increased their speed and extended their distance beyond that of the other students, I have been assigned the job of following them to ensure their safety. After too many years of running on pavement my old knees will no longer sustain me through a run of any consequence, so I ride the bike. With ice built up on the roads and no gloves on my hands, a significant oversight on my part, I was unable to peddle up cemetery hill. As a result, I asked Jana to follow the boys as I tracked them from the street.

It was not long after our departure that I arrived at the intersection of the pond road and Twin Rocks Drive to begin watching for the boys. My hands were truly frozen, so I shoved them deep into the pockets of my trousers in a vain attempt to warm up. In a while, two solitary figures appeared to float across the crest of the hill, illuminated by the rosy dawn of the new day, new year and new decade. About a minute later, Buffy the Wonder Dog could be seen wagging her tail, snuffing the ground and endeavoring to keep up. She, like me, has developed joint problems. She, unlike me, has kept on trucking. Trailing Buffy by about ninety seconds was Jana, soldiering on despite her disdain for running.

When Grange and Sammy finally reached me, they looked more like mobile snowmen than young boys. Their hats and jackets were frozen, their faces encrusted with ice crystals and their shuffling feet covered with snow. Even Buffy’s muzzle was frozen white and her whiskers clumped together, making her look more like a catfish than a canine. The runners were, however, having the time of their lives, slipping and sliding on the extensive ice sheets that had accumulated in low spots.

As I turned toward the trading post to begin the first work day of the new year, I reminded myself that I have been truly blessed. In spite of the economic woes embracing these United States, in spite of astronomical foreclosure rates in many areas of the country and in spite of the worst financial climate since the Great Depression, we have much to smile about. Seeing happy children striding through town each morning convinces me that the important things are still in order in this small village on the banks of the San Juan River.

Steve, Barry and the Team.
Posted by Tied to the Post-Twin Rocks Trading Post at 2:20 PM