Just outside the Kokopelli doors hang two woodcarvings by Dave Sipe, a folk artist from Mancos, Colorado. The carvings feature Navajo men holding signs that say “Ha’goo’nee” and “Ya’ at’ eeh.” While not exactly culturally or grammatically accurate, they are attractive, whimsical pieces. 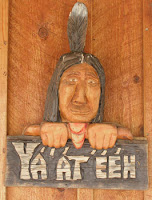 On days when the doors are flung open to reveal the beauty of Bluff, people often stand just outside the threshold, point to the carvings and ask, “What do they mean?” I frequently joke that they indicate our acceptance of American Express and Visa credit cards. After a good laugh, I explain that ya’ at’ eeh is Navajo for “hello” and ha’goo’nee’ is “goodbye.” Although that generally ends the investigation, for me the carvings have much deeper meaning.

Having grown up in the 1960s, I cannot walk past the pieces without thinking of the 1967 Beatles tune Hello Goodbye. Shortly after that song was released in the United States, Paul McCartney was asked to explain its meaning. He responded by saying, “The answer to everything is simple. It’s a song about everything and nothing. If you have black, you have to have white. That’s the amazing thing about life.”

McCartney’s explanation echos the Navajo belief that everything in nature has both positive and negative aspects. As McCartney noted, black does not exist without white. Correspondingly, males do not exist without females and there is no day without night.

This positive/negative framework of the Navajo does not fit neatly within the Western philosophy of right and wrong, it is a much broader, more subtle concept. Navajo scholar Harry Walters once described it to me in terms of a blizzard. “If you go out in it without the proper clothing, you might freeze to death,” he said, “it’s dangerous.” The storm, however, brings much needed moisture to the land, and is therefore beneficial. Harry’s interpretation was that all things can help or harm you, it is simply a matter of how you manage the various elements.

Priscilla and I have often stood on the Twin Rocks Trading Post porch and watched as a violent thunderstorm flashes its way across the land. On those occasions, she frequently says something like, “Steve, that’s a male storm. See how it blusters and blows like a man; lots of wasted energy. Female storms are gentler, quieter and leave more useful moisture; the rain does not simply run off.” I have many times thought of her comments when I am about to commence a storm of my own making. Her sound teaching has saved me, and those around me, a lot of heartache.

The other day I was in a particularly rambunctious, some might say obnoxious, mood. Having tolerated all she could stand, Jana finally declared, “Stop being such a . . . guy!” Her statement reminded me of a basket woven by Agnes Gray several years ago. The title of the weaving was Separation of the Sexes.

In that story First Woman infuriates First Man by belching after dinner and immediately launching into a lecture about how important she is to the relationship. As a result of the ensuing argument, all females are banished to the other side of the river. First Man apparently wished to drive home the point that men can live without women easier than women can live without men. The men and women finally reconcile, but not before serious consequences arise for the Navajo people; the monsters are spawned and begin terrorizing the tribe. 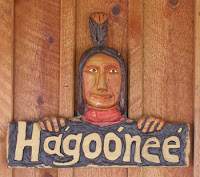 Eventually both sexes realize they are inextricably woven together in one great tapestry, and separation is not a viable option. The fabric of life needs us all, with our many and varied characteristics, to make it whole. As McCartney said, “That’s the amazing thing about life.”