The coyote and geese all stopped short, motionless, as if stunned by the shattered silence. Had I been relying exclusively on my visual perception, I would have guessed I was viewing an image frozen in time. The river, however, continued onward, and the sounds, smells and even the tastes of my surroundings indicated otherwise. The creatures seemed to draw into themselves for a fraction of a second, and then explode as if blasted from a blunderbuss. 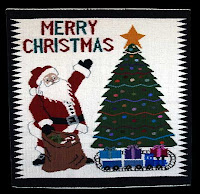 It was Wednesday, mid-afternoon, and the daylight streaming through the picture windows at Twin Rocks Trading Post was simply spectacular. Steve, Priscilla and I were all at the store waiting for, not on, customers. This time of year we rely heavily on our Internet business to keep us busy. We can usually take care of processing orders and shipments in the mornings, which allows us the afternoons to wait on the occasional customer, clean the store and try to maintain forward motion.

Steve saw me gazing out the window at the beauty of our little patch of heaven, and must have recognized a cabin fever look in my eyes. He said that he had some legal affairs to deal with, so he would be around to back-up Priscilla. Priscilla waved me off with a smile, as if to say, "Go away kid, yah bother me!" They suggested I take a late lunch and, "Get out of Dodge" while there was still time. I did not hesitate, because the natural world is where I best experience divinity. This time of year makes that connection even more essential to my emotional psyche.

Paging the cafe, I ordered a sheepherder sandwich to go. On the way out, I grabbed a pint of milk from my office mini bar and hit the door running. Picking up lunch, I jumped into the Toyota and spun the wheel left towards the intersection of Highways 191 and 162. Driving east towards Saint Christopher's Mission, I turned south on the gravel road through the Gaines property and parked between the San Juan River and the settling ponds that nourish the Jones Farm. I jumped out of the car and deeply inhaled the smell of red sand, brown water and blue sky.

Gazing across the river, I realized the beauty and majesty of the towering, burnt red bluffs which were highlighted by the slanting rays of pure, golden winter sunlight. It was 3:00 in the afternoon, and I was hoping to catch a glimpse of the Canada Geese on the elbow of the river, just downstream from where I now stood. I hopped the barbed-wire fence, cussing out loud as I left a patch of denim hanging there as a reminder of my passing.

Heading south by south-west, I cut through the tamarisk, Russian olive and cottonwood trees to intersect the river downstream from where I expected the geese to be frolicking. It would have been easier to follow the river bank, but I knew the sharp-eyed geese would glimpse my approach and exit the scene post-haste. I could hear the geese honking back and forth, so I knew their position and came to the bank about 25 yards above where they floated.

Screened by the willows, I crept down and took in the view. Because there was an alcove in the cliffs which allowed the current to impress itself deeper into a wash created by occasional outbursts of water and wind pouring down from above, the river made a sharp jog to the south. The intrusive stream was then turned back to the west by a solid wall of sandstone. This made a protective eddy in which the geese could easily swim and a small sunny beach caused by the backwater where they could rest and relax in the afternoon light.

The song of the river and the raucous remarks of the birds, along with the natural beauty of the setting, was breathtaking and peaceful to say the least. I watched as a family of Canadians played in the eddy and on the sand. There was one bird that kept wandering up the beach towards a smattering of medium to monster sized shards of sandstone. It appeared to be limping a bit, and its left wing dragged the earth slightly. The older birds seemed to call him back every time he wandered off. At one point, the wayward goose ventured right up next to the rock pile, and that's when I noticed movement.

What I saw appeared to be a coyote slinking in the brush near the jumble of rocks. My heart jumped to my throat. Without thinking, my fingers dug into the sandy soil and struck something hard. I felt around the object and found its edge as I watched the scene across the river unfold. The gray, shadowy figure inched closer to the injured goose. I knew without intervention the goose was cooked. My mind worked furiously, should I intercede or let nature take its natural course? The fact that the bird had already encountered something traumatic and survived touched my heart, and forced me to take action.

Looking down, I realized that I had nearly unearthed a donie, a well worn and rounded river rock, the size of a squashed cantaloupe from the sandy soil. I grasped it firmly and hurled it like a discus at a grouping of similar rocks about ten feet away. As the meteor struck and skipped across the other donies and plunked into the river, it made several thwacking sounds that reminded me of a set of "Klackers", those acrylic balls attached to either end of a stout string we used to play with as kids. The echo reverberated through the alcove and along the face of the cliff, like rolling thunder.

That's when the mayhem kicked in. The geese burst into the air and the coyote made a desperate leap at the limping gosling, missing by only inches. I tried to keep track of when and where all the players went, but lost sight of them in the explosion of feathers and fur. I stood up to get a better view, but Elvis had left the building; there was nothing left to see but the flowing river, red rocks and evening light. 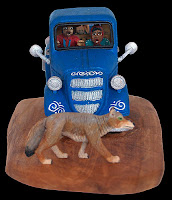 I sighed, and wondered if I had done the right thing by saving the gimpy goose from certain death. The poor creature had touched a tender place in my soul, and caused me to act purely on emotion. I turned on my heel to return to the car and the trading post. There, not 30 feet away, stood a raggedy, poor specimen of a coyote. It was dripping water from the lower portion of its gray, matted pelt, and had a desperate, almost disgusted, look on its beleaguered face.

The coyote must have landed in the river after jumping at the goose and then waded across to my side. He probably did not even realize I was the one who had disrupted his dinner reservation; until now that is! I looked upon the creature and realized, by his white muzzle, that he was terribly old. I said out loud, "You are a mangy mutt aren't you!" I thought the poor fellow would have departed at that, but he just sat back on his haunches and smiled at me as if saying, "Yeah, look who's talking pal!" I began to feel terribly guilty. If anyone needed a meal this wretchedly thin fellow did.

We stood, and sat, there looking at each other for two or three minutes before I just could not stand it any longer. I reached inside my jacket and took out the sheepherder sandwich. Unwrapping the hefty fry bread laden with beef from its protective tin foil, I remorsefully set it on the ground. The coyote watched me with much more interest now. I used the tinfoil to line the impression left by the rock I had tossed, removed the milk container from my pocket and poured it into the make-shift bowl.

Standing upright, I faced the coyote and said, "Consider this your Christmas dinner." Turning to my left, I walked away. At about 50 feet, I stole a look over my shoulder, the coyote was standing now, looking speculatively from me to the offering. I kept walking until I figured to be about 50 yards away. Because of the tamerisk, I barely recognized the spot from where I had tossed the donie and could just make out the poor fellow gobbling his holiday meal. I smiled to myself, hoping inwardly that I had not adversely effected nature's harmonious balance. Happy Holidays to you, yours, and to all God's creatures.